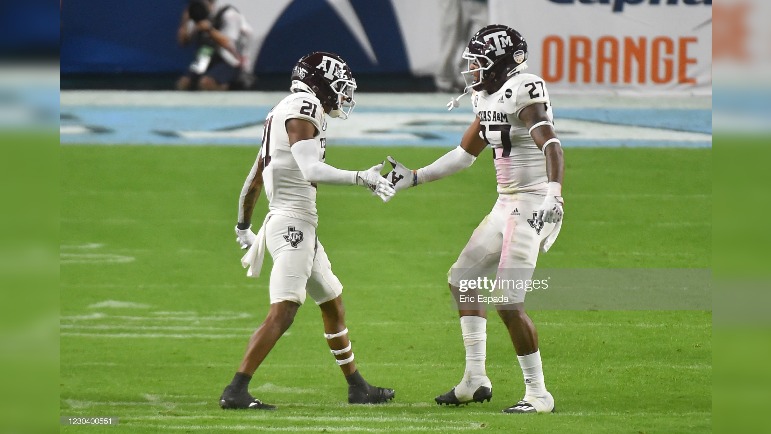 The Georgia Bulldogs passed the Alabama Crimson Tide for the #1 ranking in the polls and look to prove worthy of that ranking as they travel to Columbia to battle the Gamecocks in SEC Conference play.

The Bulldogs have plenty of talent along the defensive side of the football but watch out for LB #4 Nolan Smith. Smith is a bit of a tweener standing 6’3, 235lb and lacks eye-popping production, but he is a physical specimen as a former five-star recruit that his strong at the point of attack against the run while also having the speed and explosiveness to rush the passer. He decided to return for his senior season in 2022 and is primed to raise his draft stock in a game that he should flash early and often as a disruptor off the edge.

For South Carolina, the headliner draft prospect is CB #9 Cam Smith. The 6’0, 188lb redshirt junior has been touted as one of the top CB prospects in the 2023 draft class, having the length, ball skills, and athleticism that projects well to the NFL as a prototypical boundary cover corner. He picked off three passes and deflected another 11 last season while also showing willingness to get in on the action as a run defender. He will be tested against a Georgia offense that has plenty of pass catching weapons, making Saturday’s game critical for his stock should he represent himself well.

Cam Smith has that dawg in him 👀

Smith is currently my second ranked CB eligible for the 2023 NFL Draft. pic.twitter.com/oZG0ZvSPw9

The Nittnay lions travel to Jordan-Hare Stadium for the second part of a home-and-home series against the Auburn Tigers after a thriller last year in Happy Valley.

Penn State has several names to watch on the defensive side of the football including S #16 Ji’Ayir Brown. The 5’11, 208lb senior was a great compliment to Jaquan Brisker last season on the backend, playing the role of a ballhawk as he picked off six passes including one for a house call. He possesses great instincts and the range to make plays from sideline-to-sideline as a deep centerfielder while also having the size and willingness to come up in run support. Look for him to keep the backend of the field on lockdown and capitalize if the offense takes a shot his way.

Tremendous range on this play by #PSU Safety Ji'Ayir Brown. He’s had a fantastic season playing opposite of Jaquan Brisker and now up to five interceptions on the season.

Writing his name down for next season, he’ll be an interesting study this summer. pic.twitter.com/l4y3ZaCi04

For the Tigers, EDGE #29 Derick Hall is a name that flashed last season with 12 ½ tackles for loss and nine sacks. He is an explosive athlete off the edge that can be a handful for most OTs he will face thanks to his good get off, speed around the edge, and relentless pursuit of the passer. Auburn will line him up on the edge as well as off-ball and in the gap to get him advantageous matchups against guards and centers that he can easily defeat with speed. He will have to show he can hold his own against the run with Penn State setting the tone on the ground the first few games to show scouts he is more than just a pass rusher.

Who else is ready to see Derick Hall win the Nagurski 😤 pic.twitter.com/xtReI7Iqwd

The BYU Cougars are coming off a thrilling 26-20 win against #9 Baylor last week and now travel to Eugene to take on the Ducks who are still looking to rebound after getting trounced by Georgia on opening week.

For Oregon, most watching the game will be looking for LB #1 Noah Sewell on the defensive side of the football. Sewell is a rocked up off-ball LB prospect, standing at 6’3, 250lb and plays as an old school, downhill thumper against the run. He is a good athlete in his own right, having the speed and pursuit to chase down ballcarriers, but can struggle at times moving laterally or when tasked with coverage. He will have to do his best playing both downhill against the run as well as in space against QB Jaren Hall and the BYU passing attack to help the Ducks secure the home victory.

For BYU, the name you need to watch is OT #71 Blake Freeland. The 6’8, 305lb junior has the height and length that you look for at the NFL level. He may need to add additional mass to fill out his long frame to handle NFL power rushers better at the next level, but he has good technique in pass protection as well as good feet and athleticism on in space as a run blocker. He has no issues climbing to the second level or looking for work in the screen game, getting a body on a defender in a hurry. He played well in the Cougar’s upset of Baylor last week and will look to stack another good performance on top of that against another ranked Power Five team.

The Spartans are off to a 2-0 start after beating down on Group of Five competition the last two weeks and now travel to Seattle to battle the Washington Huskies in a Power Five clash.

For Michigan State, all eyes need to be on OLB #4 Jacoby Windmon to see if he can keep his hot streak going against an upgrade in competition. Standing 6’2, 250lb, Windmon has been the most disruptive player in college football thus far with 5.5 sacks, 6.5 TFLs, and four forced fumbles in two games against Western Michigan and Akron. The UNLV transfer has been flashing as a pass rusher, getting to the QB in a variety of ways while having a knack for forcing the turnover as well. He will face the best competition he has seen thus far Saturday and will have a chance to prove his first two games weren’t a fluke against a more-respectable Husky OL.

This game will be a focus on the pass rushers as Washington has their own notable stud in DE #58 Zion Tupuola-Fetui. Tupuola-Fetui flashed impressive pass rush talent in 2020, racking up seven sacks in three games. However, he suffered a torn Achilles, ending his season abruptly. He returned in 2021 and played in seven games, making less of an impact than the previous season, but proved to be on the right track post-injury. He now comes into 2022 as a fifth-year junior at 6’4, 260lb and looks to regain his form as a intriguing edge rusher in the 2023 class with a strong performance against Michigan State where his strength and explosiveness can shine should he be right after the dreadful injury.

One prospect @seniorbowl staff expects to have a monster year is @UW_Football EDGE Zion Tupuola-Fetui (@ztupufet). ZTF has most natural power of any 2023 edge rusher we’ve studied so far. Here’s what “putting someone on skates” looks like 👇.#TheDraftStartsInMOBILE™️ pic.twitter.com/O0tYHjEOb1

The Miami Hurricanes are off to a strong start to the 2022 season and look to keep that going as they travel to College Station to take on the Aggies of Texas A&M who are coming off a big upset at home against Appalachian State.

For the Hurricanes, OT #60 Zion Nelson is a name that needs to be held under the microscope against an SEC-caliber defense. The 6’5, 316lb redshirt junior was draft-eligible last year, but decided to return to Miami after having a down 2021 season based on the hype he had received as one of the top OT prospects prior to that season. He had been playing catchup in terms of physical development, weighing in at only 240lb in 2019 when he reported for spring workouts and is still looking to maximize the new mass on his frame. He has started 32 games prior to 2022 and ha the athletic traits you look for at OT but needs to show more seasoning in his technique and play strength.

For the Aggies, S #27 Antonio Johnson needs to step up in this game to prevent A&M from dropping two in a row at home. Widely regarded as the #1 safety prospect in this year’s draft class prior to the start of the 2022 season, the 6’3, 195lb junior is a versatile defender that mimics the roll of a pumped-up defensive back or a slender, explosive sub package linebacker. A player I compared to Derwin James in summer scouting, Johnson packs a punch as a hitter, coming downhill with bad intentions as well as a blitzer. He also breaks on the ball well in coverage, having the length and instincts to defend passes and make splash plays which the defense will need to create Saturday night.

Texas A&M Antonio Johnson is one of the best defensive weapons in college football! pic.twitter.com/Mm4nLD2K6f