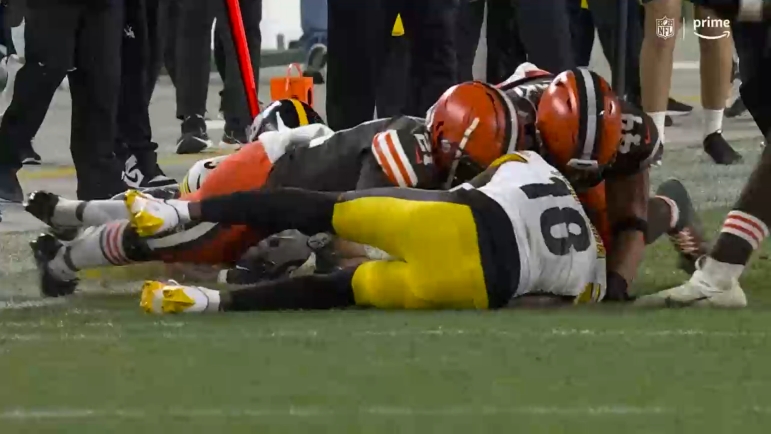 I’m still in Africa. I was listening to the game since streams were blocked at my location. The Steelers finished the first half with a 14 to 13 lead. The Steelers had the lead and were driving with the ball at the start of the second half when the Wi-Fi signal went out in the entire hotel. I went to sleep with the Steelers ahead but found out about the rest of the game once internet service restored the next day.

The Steelers had a couple bright moments but they still need to get it together.

In the first half, the Steelers offense had some success on the ground and Mitch Trubisky threw some deeper passes. That’s encouraging.

Trubisky launched a deep pass to George Pickens that led to the Steelers first touchdown.

Are you serious, George Pickens? What a one-handed grab!#PITvsCLE on Prime Video
Also available on NFL+ https://t.co/uF4okqrMww pic.twitter.com/4mDGzOOoZu

Najee Harris ran through three defenders to score from five yards out. Good blocking and hard physical running by Harris.

Another deep pass slipped through Diontae Johnson’s hands in the second half.

This would have been nice #Steelers #NFL pic.twitter.com/GR1AceWdaw

Plus, Jaylen Warren looks like a good backup for Najee. He shows real burst and power. He gained 30 yards on four carries. He had a big gain that was erased by a questionable penalty on illegal man downfield.

But the Steelers spluttered in the second half. Three straight drives that were three and outs. As I mentioned before the game, the offensive scheme is too predictable and after initial success in the first half they generated just three points in the second.

The 2022 Steelers offensive scheme is so conservative, Bill Belichick used 2004 Spygate film to scheme the defeat of Pittsburgh in week 2. 😜#HereWeGo

The defense did not apply enough pressure on Jacoby Brissett. Cleveland had three drives including one in the first half that went 79 or more yards and lasted more than 11 plays each. A defender needed to step up and deliver a splash play to prevent those long sustained drives that resulted in 16 of the Browns 29 points.

Amari Cooper and David Njoku combined for 16 receptions for 190 yards and two touchdowns. But the Browns longest play was a 36 yard Nick Chubb run that led Cleveland taking a 7-0 lead. Amari Cooper caught a fourth down pass to the two with 30 seconds left in first half. Luckily, he had stepped out of bounds earlier and was an ineligible receiver. In this case, the rulebook not the defense forced a turnover on downs.

The defense was worn down by the end with the browns holding a commanding 36:09 to 23:51 time of possession advantage. But that advantage can’t be used as an excuse for Chubb’s big first quarter run or the 80 yard drive leading to the browns second score. A lack of heavy pressure and some loose coverage doomed a strong defensive performance.

Alex Highsmith did sack Brissett 1.5 times with Larry Ogunjobi claiming the other half. The defense bottled up the Browns running attack for much of the first half. And the defense held the Browns to punts on their final three drives.

Ahkello Witherspoon went down with a hamstring injury in the third quarter.

Chris Boswell kicked off four times. The Browns returned two. David Bell returned the short kick after Pittsburgh’s first score and Miles Killebrew tackled him at the 21 after a 12 yard return. Jerome Ford came out from three yards deep in the endzone. He reached the 12 before Miles Boykin tackled him. Boswell attempted an onsides kick in the fourth quarter that went out of bounds. George Pickens penalized on play so five yards added to Cleveland’s starting position.

Despite the failed onsides kick, I give a slight edge to the Steelers coverage unit that kept the Browns starting position behind the 25 twice.

Pressley Harvin punted five times averaging 42.4 yards. The Browns returned two, and the coverage units limited Chester Rogers to 5.5 yards per punt. Harvin forced a fair catch at the Cleveland 14 on his second punt. His last two punts failed to flip to field late in the game. From his own 20, Harvin punted one 48 yards giving the Browns starting position at the 39 following a seven yard return. The second he booted from his own 10. The punt travelled 45 yards and returned four yards giving Cleveland the ball near midfield. James Pierre made both tackles. Harvin has demonstrated a very strong leg. He must get more length with hang time to flip the field when working with a wide open field. Harvin netted 40.2 yard per punt.

Killebrew’s tip was an excellent special team’s play. But Harvin just not flipping the field. Bojorquez did not net as much yardage, but his punts pinned the Steelers deeper.

Chris Boswell almost converted a 49 yard attempt that the wind blew wide right. He hit on a 34 yarder and converted both extra-point kicks.

Cade York converted a 34 yard field goal and two of three extra-point attempts. The first half miss contributed to a 14-13 Pittsburgh lead after one half of play.

The Steelers gain an edge in this department but ever so slightly. That first half miss hurt despite being very long considering the windy conditions.

The Steelers failed to accomplish four of five keys to victory for the second week in the row.

Thank you, Ross McCorkle, for keeping us up to date on the game’s first and second half Live Update and Discussion Threads. Steelers Depot respondents contributed 1096 first half comments. Respondents added  1588 more second half comments.  Here are the “best comments” of the game. I don’t know the algorithm used by Disqus but here is how they stacked it up:

Before losing my internet connection, I managed to post the best comment of the first half by repeating my tweet, “The 2022 Steelers offense is so conservative, Bill Belichick was able to use Spygate film from 2004 to help defeat Pittsburgh week 2.”

After failing to exploit a short field and missing a field goal, Reader783 lamented, “Game over, offense can’t score 7. Browns should kneel it out.” PaeperCup replied “We laugh, but….” Sort of prophetic so early in the game.

Hypo Cycloid did not like the final play call of the first half: “Dumb final play. Need a 10 yard out to the sideline. Otherwise, should have put it into the end zone. We have Pickens, Claypool, etc.” Was it execution as GrumpyHighlander replied, “He seemed to miss an open DJ that might have gotten us in fg range…that was disappointing.” Or a coordinator error, “Seemed like a weird play call. Not a lot of options in that area.” As Definitely Not Udyr opined?

The most popular post of the game from torsteel: “3 straight 3 and outs puts the nail in the coffin. Can we end the Trubisky/Canada experiment?” There was no pushback from other respondents. Just a lot of likes.

DirtDawg1964 took us back to a time younger fans gave not experienced. “Seriously, this is what the 1980s Steelers looked like.” TheBus36 agreed, “I watched a 1988 game last night on YouTube. You are CORRECT sir!!!!” BigDickSwangin added, “Unfortunately I have to agree. I’m having flashbacks to mustache Malone.”

Sweet Lee Walnuts singled out the head coaches decisions, “We don’t live in our fears. We punted down two scores with 4 minutes left for…uh…other reasons.”

GrumpyHighlander looking for change. “Game over. I don’t see how you play Mitch next week unless you’re totally giving up on the season.”

Nelsonator762 looking to the players and their leadership. “These guys seem like they quit. There is no confidence in them at all. 3 games in without Ben and this is a disaster. Quitting was something Ben never did”

The Steelers have not had a losing season since 2003. If the team’s performance continues, the fans will get saltier rather than sweeter. There may be multiple reasons why the Steelers are not a stronger team but ultimately, fans will measure their success in wins and losses.

The Steelers have a few extra days to prepare for the New York Jets. The offensive line is getting the job done. Receivers cannot let balls slip through their hands. Runner can’t put the ball on the ground. The quarterback must place the ball to give the receivers catchable passes. And converting critical third downs is necessary. Offenses cannot expect to be successful if they only convert one of nine third downs.

The defense must limit explosive plays. Giving up a 36 yard running play in the first quarter is ridiculous. Not sure if it is defensive scheme but there must be more defenders at the point of attack. The old gang tackling. The other challenge is developing consistent quarterback pressure without the service of T.J. Watt. A mediocre NFL quarterback is still going to slice up a secondary if he is free to set up and throw with no real pressure.

The next game could set the tone for much of the season. Another loss may have players losing enthusiasm and start making business decisions. Here we go.

I always like to offer a music selection. The Steelers have a little bit of time to get it together. Here is Get it Together by the Jackson Five