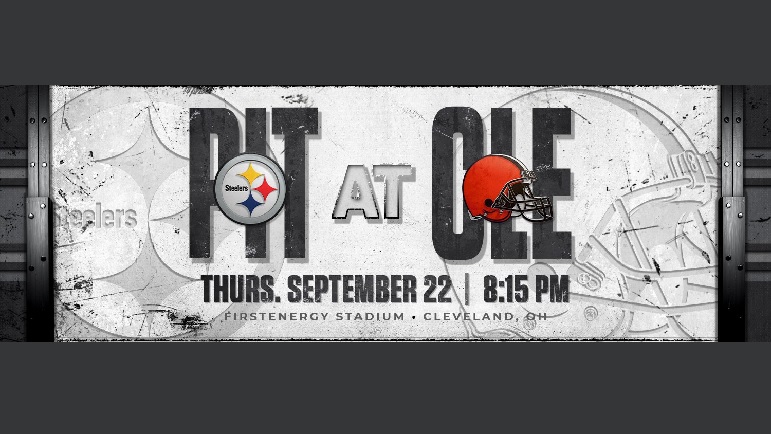 The Pittsburgh Steelers lead the game 14-13 over the Cleveland Browns going into the second half. A world of difference from this past Sunday where the Steelers went into halftime down, fresh off an explosive play touchdown to Nelson Agholor.

This time, the Steelers have the lead and they get the ball back after the half.

START OF 2ND HALF

Gunner Olszewski took the kick out of the end zone to the 16 yard line. Steelers starting deep in their own end.

On 1st and 10, Diontae Johnson raced to the sideline after a short reception of just 1 yard. George Pickens let the ball go through his arms on 2nd. 3rd and 9, Chase Claypool secured the catch along the sideline to convert.

On 1st and 10, an incomplete pass short to Diontae Johnson, but 12 men on the field for the Browns. Najee Harris made it 2nd and 1 before pushing forward for the first the next play.

On 1st and 10, Najee went off James Daniels hip for 3 yards. 2nd and 7, Trubisky pump faked to influence the defender coming in for the sack before hitting Najee Harris. Harris hurdled the defender to pick up the first down.

On 1st and 10, a check down to Najee Harris. On 2nd, Jaylen Warren picked up 20 plus yards, but it was called back for ineligible man downfield. The huge Jaylen Warren gain brought back. That would have been the longest run of the season for the Steelers.

2nd and 19, Trubisky found Diontae Johnson for 14 yards to make it manageable. 3rd and short, incomplete, but a flag down on the play. Offensive pass interference called on Claypool, declined. The Steelers will line up to punt.

The Steelers took the delay of game testing the special teams of the Browns and their discipline. Pressley Harvin’s punt was fair caught at the 14 yard line. That was nearly 6 minutes of possession that ended in 0 points for the Steelers.

1st and 10 for the Browns, Robert Spillane shot into the backfield to tackle Nick Chubb for a 1 yard gain. On 2nd down, Amari Cooper caught the ball and tight roped the sideline for extra yardage.

1st and 10, Brissett hit David Njoku on a tight end screen for 12 yards.

Nick Chubb used his legs to dig in and fight through contact for extra yardage. 2nd and 1, Brissett scrambled for the first down, but the Browns were called for holding. 2nd and 11 changes the dynamics of this series. On 2nd, Chubb picked up 8 yards to make it 3rd and manageable. Kareem Hunt tripped and failed to convert, but 4th and 1 and the Browns are going for it. Kareem Hunt motioned into the backfield and converted on a rush.

LT Jed Wills is down #Browns

Browns held under 100 yards rushing in both matchups against Pittsburgh last year. Sitting at 108 late in the third quarter tonight. #Steelers

1st and 10, Nick Chubb picked up 3 yards up the middle. On 2nd and 7, Amari Cooper picked up 6 to set up the QB sneak to Jacoby Brissett to convert.

Cam Sutton drilled David Njoku mid air after the catch to jar the ball loose for an incompletion. 2nd and 10 in the redzone Brissett hit Ahkello Witherspoon’s back for an easy incompletion. 3rd and 10, Kareem Hunt dropped the pass. Field goal coming from the Browns. Ahkello Witherspoon was injured on the play. The 34 yard attempt was good. 16-14 Browns.

Another tight, low scoring game for the Steelers as we approach the final quarter.

The Steelers lined up with three tight ends there (Heyward, Freiermuth, Gentry) and rushed for one yard on the first play of the drive. On 2nd and 9, Mitch Trubisky pulled the option and ran for 6 yards. It was a shoestring tackle and probably would have converted otherwise. On 3rd and 3, a deep shot to Diontae Johnson. It was on target, maybe a little short, but Diontae couldn’t haul it in.

That’s all on DJ. What a ball by Trubisky.

Pressley Harvin’s punt rolled forward to the 19 yard line. Lucky roll because that punt was awkward coming off his foot.

#Steelers CB Ahkello Witherspoon is out the rest of tonight's game with a hamstring injury.

Levi Wallace will be outside in base, Arthur Maulet will be leaned on more in nickel. Cam Sutton won’t be able to nickel or dime as much with him out which has ripple effects on the defense. Hopefully communication can remain good.

3rd and 1, Amari Cooper 1-on-1 against Cam Sutton with little help over top. Brissett let it rip for 32 yards on 3rd and short.

1st and 10, Nick Chubb bounced off multiple defenders for extra yardage. Sloppy tackling and exhaustion starting to set in for the Steelers defense. They have played a lot of football in three games.

1st and 10, Kareem Hunt picked up 8. The Cleveland offensive line is grinding down on the Steelers at this point. 3rd and inches, Brissett picked up about 4 yards up the middle on the keeper. Devin Bush may have saved the touchdown there on Brissett.

On 1st and goal, Kareem Hunt picked up 5. 2nd and goal from the 3 yard line, Hunt bounced outside and picked up a couple. Devin Bush tackled him short of the goal line to force 3rd down. The assist by Myles Jack. 3rd and goal Hunt was stuffed at the goal line by Chris Wormley and a handful of other defenders. 4th down, the Browns stay aggressive and go for it. Touchdown, Nick Chubb. 23-14 Browns.

Uphill battle ahead for the Steelers. The Browns have the running game to chew up clock and the Steelers find themselves in a two possession game.

Najee Harris got tripped up in the backfield for no gain on 1st and 10. Chase Claypool was targeted deep in the middle of the field in tight coverage. He probably should have caught it, but it would have been tough, incomplete. On 3rd and 10, Kevin Dotson jumped for the false start. 3rd and 15 now. Mitch Trubisky misses his target for a speedy three-and-out.

The game will be put on the shoulders of the defense. A defense that has logged an obscene amount of snaps through three games.

This is just a repeat of last week's 4th quarter. #Steelers

Alex Highsmith shot into the backfield to tackle Nick Chubb for a 5 yard loss. On 3rd and 12, the pass from Brissett bounced off Amari Cooper’s facemask. The punt pins the Steelers at the 5 yard line.

Chase Claypool caught the pass on 1st down for 7 yards. Diontae Johnson dropped the 2nd down pass. On 3rd down, Trubisky was sacked. 4th and 6, and the Steelers opt to punt. I don’t get how you punt the football there.

The Browns get the ball back around midfield. On 1st down, Kareem Hunt rushed for 2 yards. Cam Heyward tackled Chubb for a 2 yard loss on 2nd. 3rd and 10, Brissett took the sack from Alex Highsmith. A nice spin move by Highsmith.

The Steelers will start from their own 20 yard line. Diontae Johnson for 12 yards. The next two plays were to Freiermuth for 41 total yards. Diontae Johnson was targeted on the fade into the end zone, but offsetting penalties negate the play.

3rd and 5, inside the red zone with 1:57 remaining. The Steelers have one timeout. Pat Freiermuth couldn’t quite secure the pass. Looked like it was catchable on a low dart on the crosser. Chris Boswell kicked the field goal, but a flag blew the play dead prior to the snap. 12 men on the field for the Browns. 4th and inches now with 1:51 on the clock. Chris Boswell’s field goal is good. 23-17 Browns.

The Steelers pretty much have to get the onside kick here to have any chance. Even then, a touchdown is a tall task for this offense through three games.

The onside kick deflected off a member of the Browns, but it went out of bounds. Penalty on the Steelers for jumping too early anyhow. 1:46 remaining and the Steelers have just one timeout. The 1st and 10 rush went for 3 yards. The Steelers burn their final timeout. 1:40 remaining. On 2nd, Chubb rushed for about 5. 3rd and short upcoming. On 3rd down, about a minute remaining, the Browns take a timeout after running the clock down. 3rd and 1, 00:54 to go. Nick Chubb was tackled right at the line to gain, so the sticks are coming out. They rule it a first down.

171 yards rushing for the Browns #Steelers

They are reviewing the spot to make sure it was good for the conversion. It looks to be slightly short, so maybe a 4th and inches upcoming. He was short of the line to gain. The clock was reset to 50 seconds. By rule, they run the clock down to 40 for the stoppage there. The Browns will need to convert here or the Steelers will have about one to two plays to tie up the game.

On 4th and 1, Brissett tried to draw the Steelers offsides. They called a timeout before trotting out the punt unit. The punt pins the Steelers at the 4 yard line. 0 timeouts, 00:09 remaining, 96 yards to go. 99.9% win chance by the Browns for the 2nd week in a row. The Steelers try the old hook and ladder, but they toss the ball back a couple times and the Browns recover in the endzone. Touchdown. 29-17 Browns.