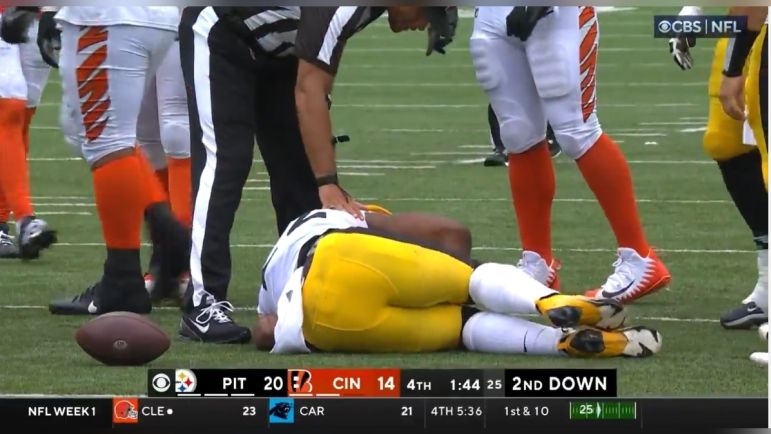 While T.J. Watt’s pec injury seems to be a big deal, running back Najee Harris’ isn’t considered nearly as serious. According to this tweet-port from Mike Giardi, Harris’ injury isn’t “a big deal.”

I'm told the Najee Harris injury is not considered a big deal. #Steelers

Clearly only the highest medical terminology here. Harris suffered the injury getting his leg bent back late in Sunday’s win over the Bengals. He shuffled off the field with a slight limp and did not return to the game, ruled out by the team.

Bengals’ reporter Kelsey Conway tweeted Harris was in a boot after the game, though that can be precautionary and does not always mean a serious injury.

Giardi’s report has an optimistic tone but it’s not clear if Harris will be ready for Sunday’s Week 2 game against the New England Patriots. It still seems possible Harris misses game action. We’ll wait for an injury report from Mike Tomlin on Tuesday for further clarification.

If Harris is out, UDFA rookie Jaylen Warren will start. Benny Snell would also see time, and the Steelers could call up Anthony McFarland from the practice squad.

Harris carried the ball ten times for 23 yards in Sunday’s win though he caught a short touchdown pass from Mitch Trubisky. Warren finished the day with three carries for seven yards. Pittsburgh’s leading rusher was Chase Claypool, six carries for 36 yards including a team-long of 15.