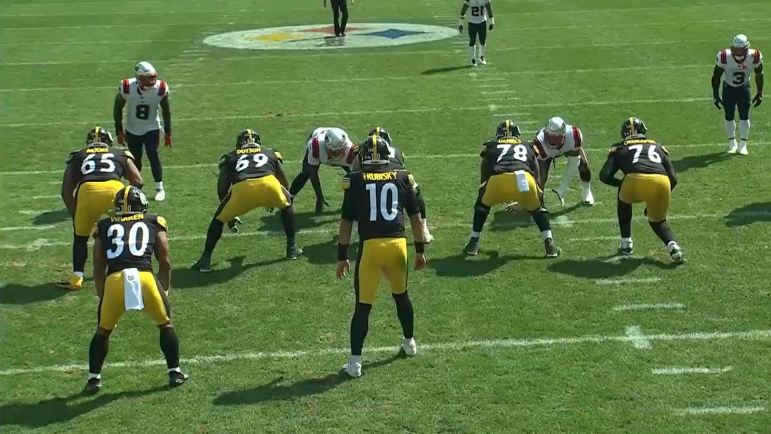 Over the first three games of the young NFL season, there is a lot to take in from the average fans’ perspective of the Pittsburgh Steelers. The injury to T.J. Watt is showing just how much he impacts the defense, not only from a pass rush perspective but also against the run. The offense is once again looking anemic, however as of late, the offensive line has shown glimpses of successful cohesion. As our Josh Carney covered yesterday in his piece, the line jumped up seven spots to No. 21 overall, according to PFF, ahead of the likes of teams like undefeated Miami and Buffalo.

Earlier today via team transcript, Offensive Coordinator Matt Canada echoed these sentiments when pressed about any tangible improvements the team has made on that side of the ball.

“I would probably focus on the offensive line,” Canada said, “We’ve got what, five statistical sacks right now, and none of them are on the line. So I think that’s a credit to them and the job they’ve done.”

According to our charting, Mitch Trubisky has been responsible for 2.5 sacks, one was on Najee Harris, and 1.5 were charged to Canada himself for a poor playcall/scheme.

Last week’s showing against Cleveland was far and away the best performance of the year, as running back Najee Harris was actually supplemented with solid blocking, springing him for several big gains, and a punishing touchdown run. However, several penalties killed a few drives, including a bone-headed one on Chukwuma Okorafor which wiped out a nice drive.

It’s a work in progress and this Sunday will be a nice chance to right the ship, at home against the Jets, before the waters get much more murky with Buffalo and Tampa Bay looming. Despite the improvements however, an interesting stat was brought up to Canada, and that’s the fact that the team is the only one remaining in the league without a 20-yard run.

“Yeah, I’d like every play to work. They just don’t work like that. I feel great about the guy I work for and the things we want to do and the direction he wants the offense to go. We’re following that and we’re going to continue to follow it until we find a way to score and produce the way we want.”