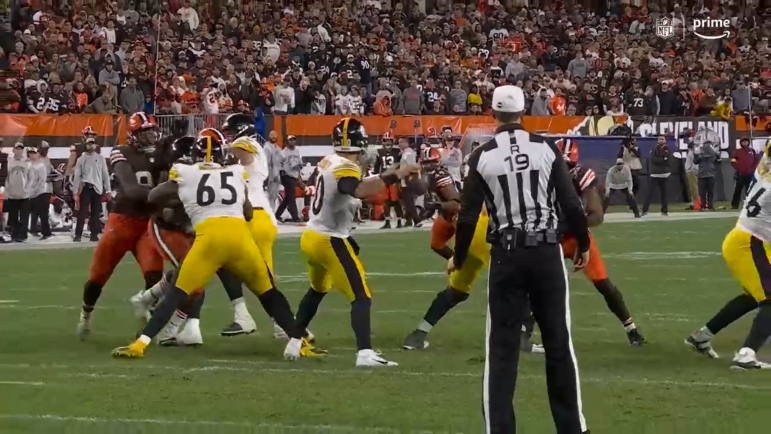 Three weeks into the season and the Pittsburgh Steelers’ biggest issue ahead of the season offensively is starting to actually look like a bit of a strength.

Thanks to that improvement each week, the Steelers offensive line took a substantial leap forward Wednesday in Pro Football Focus’ offensive line rankings, moving up seven spots to No. 21 overall in the NFL, passing the likes of the Miami Dolphins, New Orleans Saints, Jacksonville Jaguars, Buffalo Bills, Seattle Seahawks and Cincinnati Bengals to sit just outside of the top 20.

According to Pro Football Focus’ Sam Monson, the offensive line is still being covered up in pass protection some due to Mitch Trubisky’s 2.66 seconds to throw on the year, which is almost half a second longer than the time to throw Ben Roethlisberger sported last season.

That said, according to NFL.com’s NextGenStats, Trubisky is averaging 2.71 seconds to throw, right in line with Los Angeles’ Matthew Stafford and Tennessee’s Ryan Tannehill. That 2.71 seconds is 11th-fastest in the NFL, behind the likes of Tom Brady, Aaron Rodgers, Kyle Murray, Joe Burrow, and Josh Allen.

It’s continuously strange to use the time to throw metric as a crutch for trying to describe that the offensive line is being covered up overall. The quick-strike throws are part of second-year coordinator Matt Canada’s offense, much like they are in Tampa Bay with Brady, or in Green Bay with Rodgers.

It’s a silly narrative when it comes to the Steelers’ offense this year. It was mostly true last year with Roethlisberger under center, but it’s not this year. Trubisky has plenty of time and works out of some clean pockets. Overall, the Steelers’ offensive line has allowed just 16 total pressures on the year. According to PFF, right tackle Chukwuma Okorafor — who has been the Steelers’ best lineman this year — has allowed the most pressures with four, while center Mason Cole has allowed three. Left tackle Dan Moore Jr. sits at two pressures, while guards James Daniels and Kevin Dotson have allowed one pressure each.

I haven't charged the Steelers' offensive line for a single sack over their first three games. A remarkable stat I didn't expect based on how this group looked in the summer.

Credit each guy for progressing and new OL Coach Pat Meyer getting this unit on track. #Steelers

In fact, running back Najee Harris is the one struggling in pass protection, according to PFF, allowing three pressures and both sacks the Steelers pass blockers have been charged with this season.

Over the last two weeks, there’s no denying the offensive line has improved, both in pass protection and in the run game. Another big test is coming Sunday though against the New York Jets, led by the disruptive Quinnen Williams along the interior.