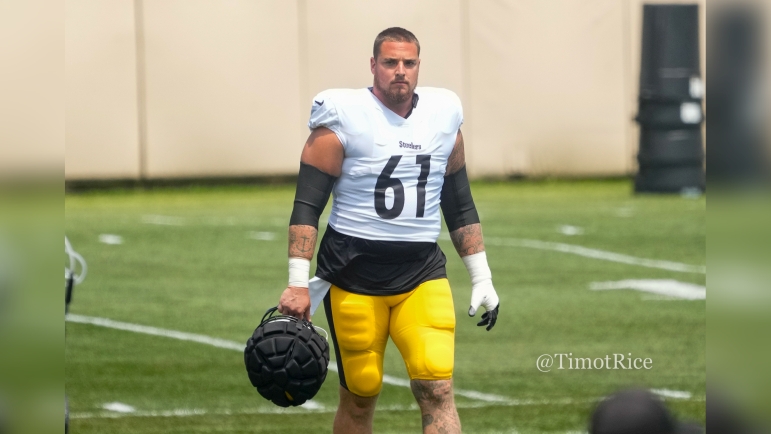 After the Pittsburgh Steelers’ 17-14 loss to the New England Patriots on Sunday, Mitch Trubisky alluded to arguing in the locker room over playcalling.

“But, when everybody is saying, ‘call this play, call that play it,’ it makes it tough just for everybody to do their jobs. I think everybody just needs to worry about their job, and we’ll just keep growing and going in the right direction together,” Trubisky said in his postgame press conference via the team’s YouTube.

Today, center Mason Cole was asked about the fighting in the huddle and attributed it to everyone being competitive.

“We’re all competitors here. Everyone wants the ball, everyone wants to score a touchdown. It’s always like that in this game. And in competitive moments, it’s always going to be like that. You gotta like that from the guys. Guys want the ball, guys want to make plays and that’s what the playmakers are there for,” Cole said via Steelers Live.

Mason Cole talks to the media about QB Mitch Trubisky’s leadership, finding an identity on offense, and more. pic.twitter.com/EKvW2eOopK

Pittsburgh does have a lot of mouths to feed on offense. Between Najee Harris, Diontae Johnson, Chase Claypool, Pat Freiermuth, and even George Pickens (whose involvement has been slim to none thus far), there are a lot of guys on the Steelers’ offense who can make plays and want to make plays.

When the offense is struggling and those guys feel as if they aren’t able to make those plays, frustration can certainly set in. Whether it’s the offensive coordinator (which it certainly seems to be) or each other, it can lead to a little bit of competitive fire coming out in the huddle in a way that might not necessarily seem to be effective.

Obviously, as Cole said, you like having guys who want to have the ball in their hands to try and make something happen. You want players who want to make plays, and the Steelers seemingly have that. The problem is, the offense isn’t clicking in a way that allows them to do so right now, and that’s going to lead to frustration.

When an offense with this much talent only has two touchdowns through two games, guys aren’t going to be happy. You can’t blame them, either, as the offense is holding the Steelers back in a major way right now, and the playmakers feel as if they could positively impact the offense, but they aren’t given the chance to do so.

Thursday night against Cleveland is going to be extremely important for this team. Not only is it a divisional matchup, but it’s a chance to prove that the Steelers’ offense is better than what it’s shown through two games. And that extends to the coaching staff with play-calling in addition to the on-field execution. If the offense looks stagnant again, changes could be coming sooner rather than later.