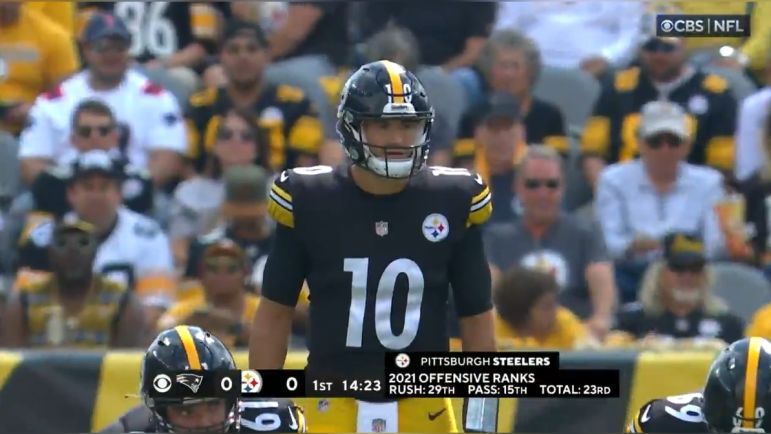 If the body language from some offensive players for the Pittsburgh Steelers Sunday in a 17-14 loss in the home opener at Acrisure Stadium wasn’t telling, the pointed comments postgame were pretty obvious that there’s some dissension in the ranks offensively, with frustrations mounting due to the lack of success.

Wide receiver Diontae Johnson showed some frustration with the football not coming his way when open, Chase Claypool stated that the players can only execute what’s called, and quarterback Mitch Trubisky took a shot at offensive coordinator Matt Canada regarding concepts in the middle of the field.

Players Sure Sound Frustrated By The Matt Canada Led Offense

It was never going to be a smooth transition from Ben Roethlisberger in 2021 to a new quarterback in 2022, along with some new pieces on the offensive line. That said, the performance through two games from the black and gold simply isn’t good enough hand the frustration is mounting.

Trubisky senses it internally and externally, and even heard the chants for Kenny Pickett on Sunday. Still, he’s focused on the task at hand and implored his fellow teammates to keep buying into the offensive scheme, coming together as a collective unit early in the season to find some success.

QB Mitch Trubisky addresses the media following our game against the Patriots. pic.twitter.com/IxgAQHnRqW

Speaking with reporters after the loss to the Patriots, Trubisky’s frustration could be seen all over his face.

“You have to stick to the plan. Everybody’s got an idea of what the offense should or could be, but it’s…we gotta come together as a collective unit and everyone’s gotta keep buying in,” Trubisky said to reporters Sunday, according to video via Steelers.com. “There’s gonna be good plays, there’s gonna be bad plays. But we’re a young offense, and we’re still growing in this thing together. So the best thing you can do at this time is just continue to buy into the plan, whatever it is, do your job to the best of your ability, and then when you go back and look at the film, you see what works, you see what doesn’t and you do more of the stuff that works, and then maybe you drop some of the other stuff. I think that’s how you grow as an offense.

“But, when everybody is saying, ‘call this play, call that play it,’ it makes it tough just for everybody to do their jobs. I think everybody just needs to worry about their job, and we’ll just keep growing and going in the right direction together.”

While Trubisky is spot on in his assessment of everyone on the offense needing to focus on their jobs, it is a bit startling to hear Trubisky openly call out some unnamed players for wanting this or that called within the game. There’s dissension in the ranks, which is very troubling just two weeks into the season.

How it gets better remains to be seen. There seems to be a lack of trust and belief in the scheme itself, not to mention the man calling the plays. There’s frustration with the execution from the coaching staff down to the players. It’s ugly right now, and the Steelers need to get back to the basics of what worked in the preseason and what they’ve been practicing and having success with.

It’s a quick turnaround to Thursday’s road trip to Cleveland. That said, maybe that forces the Steelers to be basic and get back to the simple things that have worked in training camp and the preseason. We’ll see. There’s no denying a rift is starting to form in Pittsburgh, though, on the offensive side of the football.