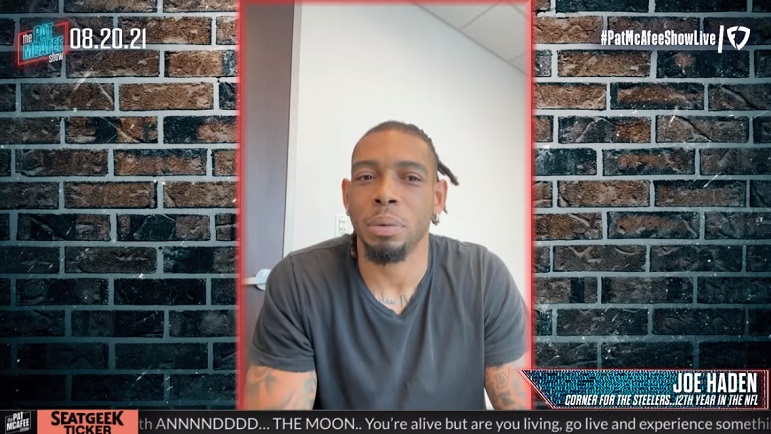 On Monday, former Pittsburgh Steelers CB Joe Haden joined The Pat McAfee Show to talk about his recent retirement, his prospects of getting involved with radio and television, and his thought process of hanging up his cleats compared to playing for a contender on the cheap.

When asked by McAfee about the Pittsburgh Steelers and if Mike Tomlin and company will get this rough start to the season figured out, Haden backed his former coach, saying that Tomlin isn’t the type to lay down and die after a rocky start to the 2022 season.

“I believe in Tomlin,” Haden said on The Pat McAfee Show which aired live on the show’s YouTube channel. “The same when we had Mason Rudolph there. We had Duck Hodges. There are no losing seasons. We’re going to figure out a way to get some wins and he’s just going to show you the tape is the tape. If you’re not doing your job, he’s going to get you out of there. So, I think just his coaching style, his honesty and every week is a different week. So, he’s onto the next. He’s trying to win the next game. He doesn’t dwell on the past and that he just wants to continue to keep it going.”

Having played under Mike Tomlin from 2017-2021, Haden has had a fair amount of exposure to the coaching style Tomlin brings to the Pittsburgh Steelers’ organization. For the Steelers, the standard is the standard, and that standard is playing winning football, making the playoffs, and getting to the Super Bowl to hoist that Lombardi Trophy. For Tomlin, that standard has become never having a losing season as the man leading the Steelers, posting a record .500 or above every season since being hired as the head coach in 2007.

While things may look dire at the moment with Pittsburgh currently sitting at 1-2 on the season coming off back-to-back losses to the Patriots and Browns, Haden is right in saying that this isn’t a place that is foreign to Tomlin and the Steelers. The team started the 2019 season 1-4 and lost Ben Roethlisberger in Week 2 for the year to an elbow injury. However, Tomlin managed to rally the troops and Pittsburgh finished the season with an 8-8 record with a combination of Devlin Hodges and Mason Rudolph at QB.

Last season, Pittsburgh started 1-3 after losing three-straight after a surprising Week 1 win in Buffalo. The Steelers overcame injuries and dreadful offensive line to finish the season 9-7-1 and make the Wild Card Round of the playoffs.

Pittsburgh may not be considered contenders in the AFC this season, and rightfully so after their performances to date to start 2022. However, they always seem to right to the occasion and avoid being one of the worst teams in the NFL regarding their record. After Thursday night’s loss to the Browns in primetime, it should be expected that Tomlin once again is having his team go back to the tape to make necessary corrections in attempt to right the ship and improve as the season wears on.