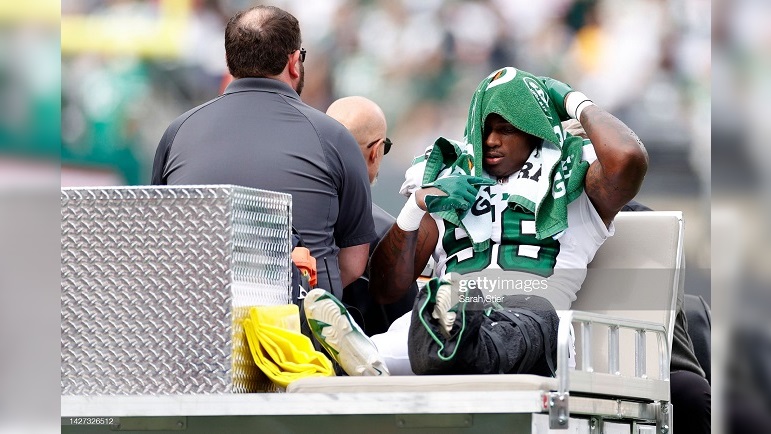 The Pittsburgh Steelers will host the New York Jets next Sunday at Acrisure Stadium and the visiting team will enter Week 4 with a few injured players worth monitoring these next several days.

Jets tackle George Fant and linebacker Quincy Williams both left the team’s week 3 home loss to the Cincinnati Bengals with injuries and did not return. After the game, Jets head coach Robert Salah did not provide much of an update on either player, both of whom are starters.

“Real quick, two guys didn’t finish. George (Fant) is dealing with knee. Quincy (Williams) with an ankle. Both will be reevaluated tomorrow,” Salah said during his Sunday postgame press conference.

Williams needed to be carted off the field with his ankle injury so he might be the more serious injured of him and Fant, who reportedly suffered an aggravation to his surgically repaired knee on Sunday. Conor McDermott replaced Fant at left tackle on Sunday against the Bengals and he would likely start against the Steelers should Fant be unable to play. Linebacker Marcell Harris preplaced Williams in the Jets’ defense on Sunday.

Jets rookie wide receiver Garrett Wilson left Sunday’s game against the Bengals with a rib injury, but he was able to return to action in the second half.

The Jets are hoping to get their starting quarterback Zach Wilson back from his knee injury in Week 4 and Saleh briefly talked about that possibility after his team’s Sunday loss to the Bengals.

“I’m expecting [him back], but until the doctors say so, I’m just going to say he’s being evaluated,” Saleh said of Wilson’s Week 4 status after Sunday’s game.

The Jets’ first injury report of Week 4 won’t be released until Wednesday afternoon, so we’ll have to see how extensive it is at that point. Wilson was the only player on the team’s Week 3 injury report to miss the Sunday game against the Bengals. He’s yet to play this season since suffering a knee injury during the preseason.

As for the Steelers, cornerback Ahkello Witherspoon will be the player to watch this coming week on the team’s injury report. Witherspoon left the Steelers’ Thursday night loss to the Cleveland Browns with a hamstring injury.