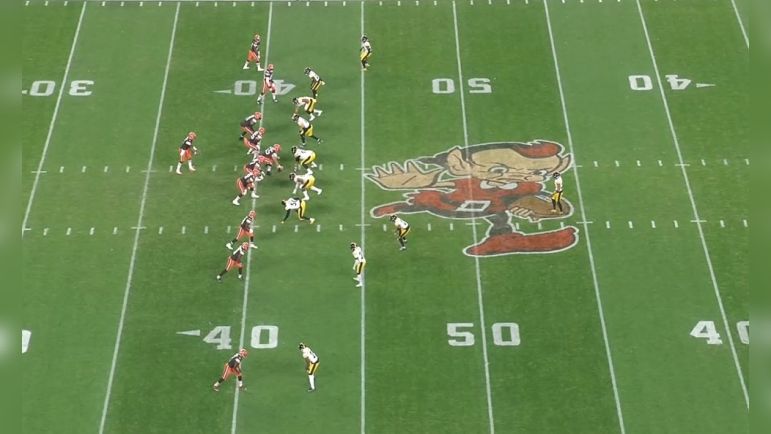 Stop me if you’ve heard this one before. The Cleveland Browns effectively moved the ball against the Pittsburgh Steelers out of empty sets. At this point, it’s a yearly tradition. An ever constant. Death. Taxes. The Browns going big personnel, spreading the field out, and picking the Steelers apart. A similar story played out Thursday night.

Now, this game wasn’t as bad as some of the others. There weren’t as many dreaded backs-on-receivers moments that have happened in the past, and my typical disclosure is that empty is very hard to stop. I don’t know if any team has great answers. But it’ll continue to be a weapon for the Browns, who lean on it more than any team Pittsburgh faces.

Thursday night, the Browns went empty 13 times. They went 9/13 for 101 yards and five first downs, including one third-down conversion and another that set up 4th and short that led to a successful conversion. I’ve hashed out the issue enough so I just want to do a quick cut-up of all the ways Pittsburgh tried countering it. They did a lot. It just didn’t work. Here are all the completions against man and zone:

To the Steelers’ credit, they are trying to come up with more answers and make reads a bit tougher on quarterbacks. Instead of the obvious “linebacker on the back = man, cornerback on the back = zone,” there’s more matching releases and disguises. In the third clip, you’ll see Cam Sutton on RB Nick Chubb with the team in man coverage. There’s cons to that, you’re more vulnerable to getting linebackers in bad matchups, but the two-high structure allows the linebackers to be more aggressive underneath.

Still, man was not very effective. Ahkello Witherspoon gave up the biggest play, uncomfortable in his slot alignment and allowing a ton of YAC to Amari Cooper for a 28-yard gain.

It’s worth noting the Browns used less big personnel out of empty, only on four of these 13 throws. The other nine came out of 11 personnel, their three-receiver set. The reason? Pittsburgh was trying to stay in its base defense as much as possible and didn’t use nearly as much 3-3-5 as they did versus the Patriots, just give total snaps against the Browns. Understandably, they wanted their big people on the field as much as possible, even employing 3-5 looks with five linebackers on the field (two OLBs, three ILBs). Against 11 personnel, the Steelers stayed in their base defense 40% of the time (16 of 40 snaps).

Cleveland leveraged this knowledge by using a lot of 11 empty personnel, knowing Pittsburgh would try to stay in their base to protect themselves against the run. And they got a couple of good gains out of it. The only incompletion against man was an early/off-target throw to Cooper running the same out route from #2 as he did on his 28-yard gain. The ball clanged off Ahkello Witherspoon’s side for the incompletion.

Statistically, a bit better than man coverage. Cleveland used empty quite a bit at the end of the half to move the ball downfield, picking apart the soft spots of the Steelers’ zone coverage with easy underneath reads for Brissett. TE David Njoku made a killing off these, catching three passes on three targets for 37 yards. One issue of empty is there’s not a lot of immediate gang-tackling. It’s 1v1 and if someone misses a tackle, there’s space for YAC and Njoku’s 19-yard catch; the second clip had plenty of it.

Pittsburgh forced three incompletions here but they weren’t really well-earned. One came from Cooper stepping out of bounds before making the catch, negating a massive gain, one pass was heavily pressured by Larry Ogunjobi, and one was pressured a bit by Robert Spillane but mostly dropped by Cooper on fourth down.

There’s no bigger thorn in the Steelers’ side than these empty sets. Just as the Browns’ run game stayed on-schedule, their short pass game against empty was essentially an extension of that, consistently gaining them good yardage on early downs. Nine of these thirteen plays came on first and second down. Bank on seeing it again when these two teams meet in Week 18 with the Browns getting back QB Deshaun Watson, whose mobility will be an added factor in these moments.