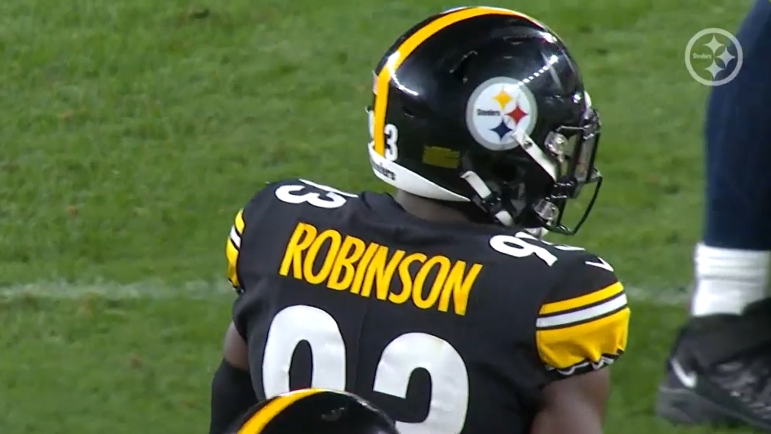 Reasoning: Rookie inside linebacker Mark Robinson was listed as a second-string defender on the Steelers’ first official depth chart of the regular season, even surviving an initial proofreading that caused quite a bit of drama on Monday.

Assuming that the depth chart that is now out there is actually accurate, which we can no longer take for granted to the degree that we might like, it appears that head coach Mike Tomlin was thoroughly impressed by the training camp and preseason period performance by rookie sixth-round inside linebacker Mark Robinson.

Having only recently converted to the defensive side of the ball prior to his lone season at Ole Miss in 2021, Robinson looked less unrefined, perhaps significantly so, than many might have expected for the late-round draftee, who when initially selected most likely had penciled in as a potential practice squad candidate.

Flash forward four-plus months, however, and now he’s quickly becoming a fan favorite, even seeing some clamor for him to get an opportunity to play. Well, the fact that he is listed as a second-string defender along with Robert Spillane, ahead of Marcus Allen, at least makes that slightly more realistic.

The most significant component of the fact that Robinson is listed as second-string is the fact that it strongly indicates Tomlin’s intention to dress him for games, Allen being a core special teams player, although we can’t necessarily take that for granted, either. Robinson did play on special teams during the preseason, though, so there’s a more than fair chance he is asked to contribute in that area.

As far as when or if we can actually expect him to see the field defensively, well, I still wouldn’t necessarily count on it. He may be listed on the second team, but he’s still behind Devin Bush, Myles Jack, and Spillane. An injury could open the door for him to see the field on some type of rotation. We might also be able to expect him to get an opportunity to take the field in late-game situations if the score is not close, one way or another, which we’ve seen Tomlin do with young players before.