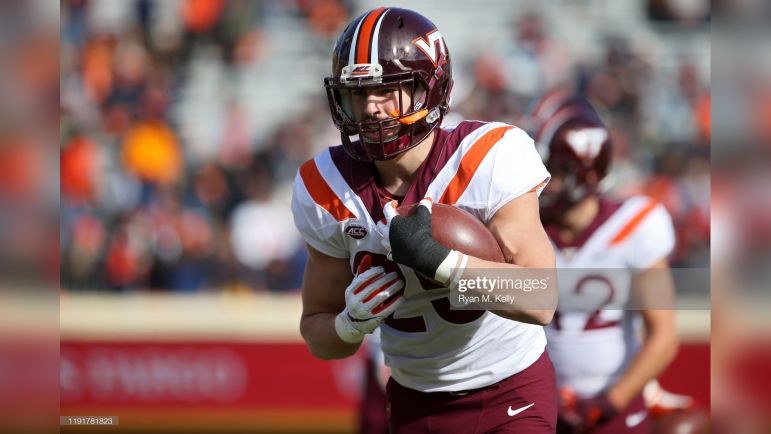 It’s been a busy day for the Pittsburgh Steelers. Cuts, trades, and now, at least one visit. According to the NFL transaction wire via ESPN’s Field Yates, the Steelers hosted TE Dalton Keane for a visit.

Standing in at 6’4″, 253 pounds and hailing from Virginia Tech, Keene is a former 2020 third-round pick of the New England Patriots. As a senior in school, he caught just 21 passes but found the end zone five times. But he’s struggled to find his NFL footing, appearing in just three games as a rookie, mostly used as a blocker across 140 offensive snaps and catching only three passes. He’s battled knee injuries, landing on IR in 2020 and 2021 due to them, the latter being due to a torn meniscus. The Patriots waived him on August 21st.

Our Tom Mead profiled Keene back in 2020, concluding:

“As a blocker he is tenacious, has good technique and sustains his blocks. He is lean and has room to add some strength and needs to work on his route running if he wants a bigger role.  I think he’ll have a role as the #3 tight end to be used mostly as a run and pass blocker as a fullback or on the wing and will be a core special team player.”

You can check out his full report below.

Pittsburgh’s likely looking for practice squad options. Earlier today, the team cut TEs Kevin Rader and Jace Sternberger. Rader seems like a good bet to make the practice squad, but it’s possible the team carries two. If so, Keene could be the other guy. Teams can start building out their 16-man practice squads beginning tomorrow afternoon, and we should see the Steelers sign a handful of outsiders. We’ll let you know if Keene is one of those guys.