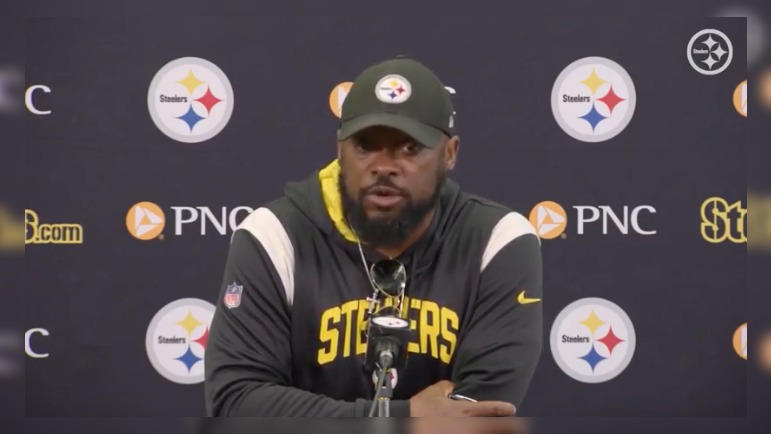 Yesterday when speaking with Missi Matthews and mike Prisuta after training camp practice wrapped up, RB Najee Harris mentioned that he has had conversations with Mike Tomlin about getting some run this weekend against the Jacksonville Jaguars. Harris made it clear in the interview that at the minimum, he will get some action in Pittsburgh’s final preseason game against the Detroit Lions, as he is determined to see some preseason action prior to the start of the regular season.

While it would make sense for Harris to get some game action against Jacksonville Saturday with the rest of the starters, he is coming off a foot injury that he suffered on the team’s first padded practice session of training camp. Harris reportedly had his foot stepped on, causing him to sit out of several practices before returning in full capacity this week.

However, while Pittsburgh would be wise to take it easy on their feature back, Mike Tomlin gave the notion that Harris could get his wish this weekend in his press conference prior to Thursday’s practice. Tomlin mentioned in his opening comments that “all that are healthy to this point are scheduled to play,” suggesting that Harris could get some run as soon as Saturday night against the Jacksonville Jaguars. When asked about Najee Harris specifically and his potential availability Saturday night coming off the foot injury he suffered during training camp, Tomlin mentioned he would keep the light on in terms of Harris making his preseason debut this weekend.

“Again, right now I have an inclusive mentality,” Tomlin responded to the media on video via Steelers.com. “We’ll see how the rest of his work progresses throughout the week. There have been guys like him that are getting on this moving train, Chase Claypool and others. And right now, I have the mentality that I’m going to be inclusive regarding their performance, but we’ll see what the rest of the week holds from a preparation standpoint.”

Normally, Tomlin is pretty black and white when it comes to telling us if a player is going to be held out of a game due to injury. For Tomlin to keep the door open for Harris to play on Saturday suggests that may be the plan of action to have him play with the rest of the first-string offense this week, as many starters will likely sit the final week of the preseason as Pittsburgh evaluates the back end of the roster to determine their final roster cuts prior to the start of the regular season.

It wouldn’t make much sense for Najee Harris to get exposure with a bunch of backups in the team’s final season game next week if he is fully cleared to go this weekend, albeit for just a few snaps. Harris has made it known that he wants to get some run in the preseason, and when Tomlin was asked about Harris’ comments, he was in full agreement with him.

“I want him to get a couple carries,” Tomlin said. “And so, I’m in agreement with him. So, it’s nothing to gauge.”

While you want to preserve your workhorse back for the rigors of a full 17-game schedule, it is important to allow Harris to get some exposure in preseason play to get his feet underneath him with the first team offense and get in the rhythm of things before the games count. Tomlin appears to see it the same way, and will look to oblige Najee’s request before the preseason is over. Depending on where Harris is at regarding his foot, that exposure could come as soon as Saturday night against the Jaguars.