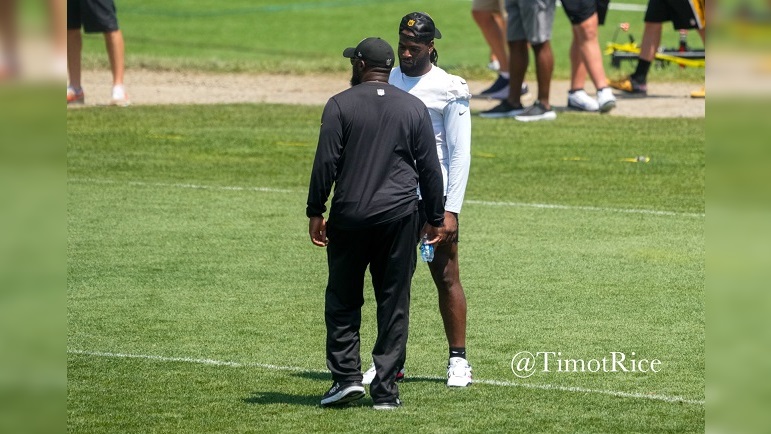 Coming off of a rookie season in which he handled a heavy workload, Pittsburgh Steelers running back Najee Harris is once again expected to carry a heavy workload for the Steelers’ offense under second-year coordinator Matt Canada. Knowing that, it’s important to lessen the wear and tear on Harris ahead of the regular season, at least from the Steelers’ perspective.

His foot injury he’s dealt with in training camp at Saint Vincent College in Latrobe has been a bit of a blessing in disguise, as it’s kept Harris out of the lineup and mostly off the field in contact situations. However, Harris – who returned to practice this week — is itching to get back onto the field in a game situation, and expects to play in one of the two remaining preseason games, he stated to Missi Matthews and Mike Prisuta for Steelers.com’s Training Camp Live wrap-up show.

“There’s been a lot of conversations with me and Mike T about me playing this game, bare minimum playing the last game, but I am playing one of these preseason games,” Harris said to Matthews and Prisuta, according to video via Steelers.com. “I do want reps and I do want carries so I can get a feel of the game again. I don’t want my first live action to be against the Bengals and practice. Mike T, you know, he obviously is the head guy, so he makes the rules, so I can’t really get that much live reps and practice. So, it’s only right if I get some preseason reps.”

While Harris certainly makes a strong case for him to get some preseason action prior to the Sept. 11 opener against the Cincinnati Bengals, based on him needing a game feel and adjusting to some contact ahead of what looks to be a season filled with work on the ground and in the air, it might not be the best decision possible for the Steelers to expose him to wear and tear in a meaningless game.

Last season, ahead of his rookie season in the NFL, Harris definitely needed the work in the preseason to get up to speed with the NFL. That’s not the case anymore for the star running back. Much like a pitcher in spring training in baseball, Harris needs to save as many bullets as possible (carries, catches, taking hits) for the regular season and potentially the postseason, rather than getting work in during the preseason.

He’s obviously making the team and will be the feature back. He won’t forget how to take a hit or how to play the game without preseason action. There is something to be said about gelling with the offensive line, seeing plays develop full speed and things of that nature, but the cons far outweigh the pros here for Harris.

If he does get preseason action, hopefully it’s one or two carries, a catch, and then he’s on the sideline without a helmet.