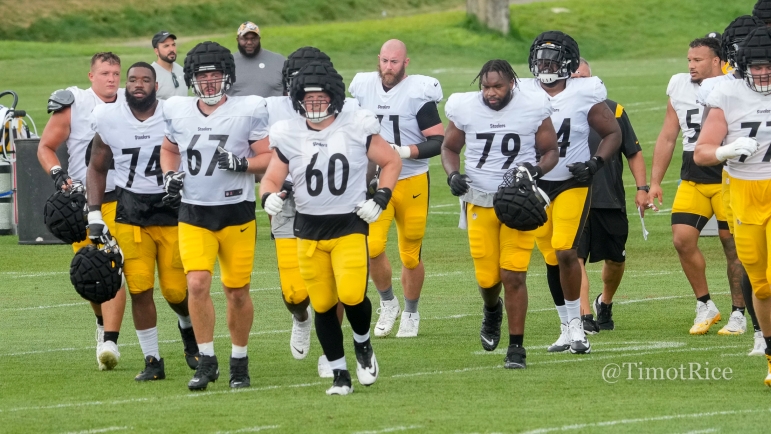 Recently, Pittsburgh Steelers GM Omar Khan appeared as a guest on the All Things Covered podcast hosted by former Steelers DB Bryant McFadden. The two talked about his new role in the organization after he got promoted to the GM job as well as the ongoing QB competition between Mitch Trubisky, Kenny Pickett, and Mason Rudolph as well as the plausibility of one of them being dealt prior to the start of the 2022 regular season.

When asked by McFadden about the current state of the team’s offensive line and what his comfort level is in that unit heading into the regular season, Khan acknowledged that improvements need to be made based off what he’s seen thus far in preseason action.

“Well, I think there’s, there’s work to be done,” Khan said to McFadden on All Things Covered. “I think we have expectations for what we want from the offensive line. And we have another game this week and then we get to the regular games and it’s important to have a strong offensive line and a productive offensive line to, to help us succeed. So, in terms of if your question is one of the expectations, we expect to have a good line. We do like several of the guys that are on the offensive line, and we know we can do better. And I’m confident that we will get there.”

The offensive line was supposed to be improved from the dismal unit that took the field last season, having experienced a mass exodus of starting-caliber talent from the roster last offseason. RT Chukwuma Okorafor was the only returning starter from the unit that took the field in 2020, and the OL notably struggled as it tried to have a bunch of young, inexperienced guys as well as Trai Turner and Okorafor resemble a capable unit up front.

So far in 2022, the performance hasn’t been any better despite Pittsburgh bringing in C Mason Cole and G James Daniels via free agency this spring. LT Dan Moore Jr. has looked overwhelmed on the blind side in pass protection thus far in preseason action, and the combination at LG involving Kendrick Green and Kevin Dotson has disappointed as neither has seized the job. Daniels hasn’t met expectations given the contract he was signed to, and while Cole and Okorafor have been serviceable, the unit as a whole has made life hard on Pittsburgh’s QBs.

HC Mike Tomlin has also been frustrated with the play of the OL thus far, as he recently put Green up on the board and had them watch the film to evaluate their performance against the Jaguars last week. Pittsburgh has made some minor moves like bringing in William Dunkle and Adrian Ealy, but neither of those moves figures to impact the starting lineup that has struggled to have any sense of stability thus far in the preseason. While the OL is having to adjust to a new set of teachings under OL Coach Pat Meyer, continual repetition will only go so far if the caliber of the players can match the competition they face on a down-to-down basis.

Finally settling in after being at the game today.

Khan mentions that it’s important to have a strong and productive offensive line, but in reality, that is the last thing this unit in Pittsburgh has been since 2020. We should expect some improvement from the unit as they begin to gel better together and get used to Meyer’s philosophy, but if notable changes in results want to be had, changes up front to the starting lineup need to be made. Therefore, expect Khan to have his eyes peeled on the waiver wire when it comes to roster cuts that Pittsburgh may add to their 53-man roster or a potential trade opportunity that may come available that the team may see as a potential upgrade to the starting lineup or to add quality depth in 2022.

Five Offensive Lineman Who Could Interest Steelers After Cutdowns