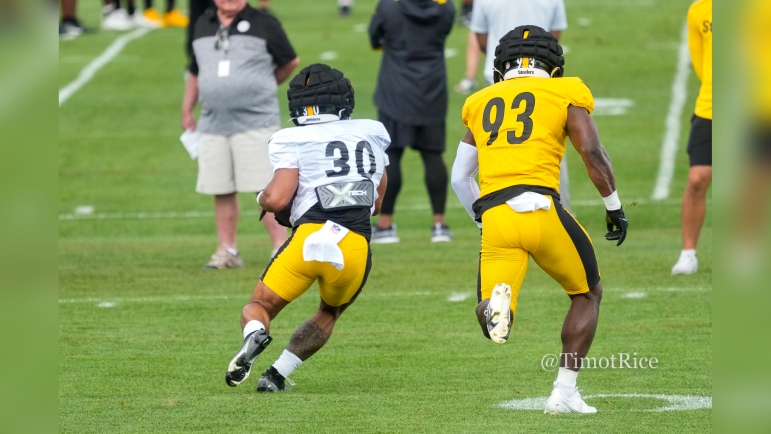 The comparison seemed almost too easy. But one summer in the books and it’s hard not to see Vince Williams in seventh-round rookie Mark Robinson’s game. Last night, Williams praised Robinson’s play, saying Robinson is further along than he was as a rookie. Speaking to the media Wednesday, Mike Tomlin was asked about that comparison.

“He’s a contact player,” Tomlin said via Steelers Live. “He loves the combat. And they’re very similar in that way.”

That was the book on Robinson coming out of Ole Miss. A former running back turned linebacker for his final year in college, he made nine starts for the Runnin’ Rebels. A downhill thumper, the Steelers took a chance on him in the seventh round. With little experience and facing a crowded inside linebacker room, it seemed like Robinson’s best chance to stick was through the practice squad. But he’s enjoyed a strong summer and played the run well inside stadiums, especially in Saturday’s win over Jacksonville, finishing the game with three solo tackles.

Film Room: Mark Robinson Plays Like A Heat-Seeking Missile Against The Jaguars

Robinson is aggressive and physical but crucially, he plays under control and maintains his gap. He’s a strong bet to make the 53-man roster as the #4/#5 inside linebacker, having the edge on second-year Buddy Johnson, who is in danger of not making the team.

With questions at inside linebacker, it’s possible Robinson could even see defensive snaps his rookie year just as Williams did as a rookie. Williams’ role on the team quickly changed after Larry Foote was lost for the year in 2013, pressing Williams into action the rest of the way. While there’s a scenario in which Robinson could log time, Devin Bush is likely to be the Steelers’ Week 1 starter with veteran Robert Spillane next-man-up should the team decide to make a change. Like Williams, Robinson will first try to carve out a role on special teams, an area of his game that he needs to improve.

While Williams praised Robinson publicly, Tomlin joked it might not have been totally sincere.

“Those of us that know Vince know he didn’t mean that. Vince loves Vince.”

In a follow-up tweet, Williams clarified he said Robinson was better than him as a rookie, not overall. Of course, Robinson will have to prove himself when the games start counting, just as Williams did throughout his solid career.