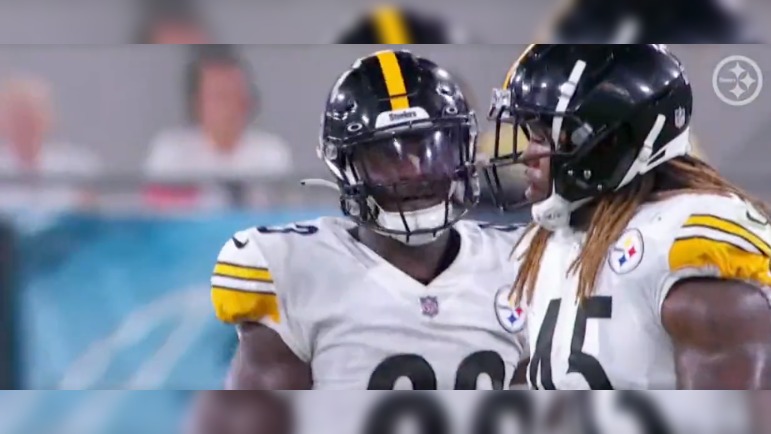 On Saturday, the Pittsburgh Steelers went into Jacksonville and came out with a 16-15 win over the Jaguars. The narratives on the offensive side of the football included the positive play from the QB position with Kenny Pickett leading a TD drive in the two-minute offense and Mason Rudolph getting the go-ahead score late in the fourth quarter along with the dreadful play upfront by Pittsburgh’s offensive line.

On the defensive side of the football, the narrative on the night pertained to a notable improvement against the run compared to the team’s first preseason game against the Seahawks. Pittsburgh overall did a better job taking on blocks and filling gaps, holding Jacksonville to 97 yards rushing on 30 attempts.

One player that stood out on the defensive side of the football was rookie LB Mark Robinson. Robinson was coming off a strong showing against Seattle where he got a sack strip fumble at the end of the game to give Pittsburgh a chance to go down and score to take the lead. Against the Jaguars, we saw Robinson make more impactful plays as a run defender. He played like a heat-seeking missile all night for Pittsburgh, flying to the football and arriving on the scene with bad intentions.

No play sticks out more by Robinson than this hit at the end of the game on the receiver running the shallow crosser. Robinson drops to his zone and sees the WR running a drag across the middle. Robinson immediately triggers downhill and arrives on the scene as he catches the pass, launching into the pass catcher’s shoulder and sends him into another dimension, knocking him off his feet three yards backward with the violent collision.

Robinson was flying around to the ball all night in Jacksonville, showing that nasty downhill thumper mindset you like to see from your inside linebacker. Watch this rep where Robinson takes a good angle on the zone run to the right, closing the space on the LG’s hip pocket and gets in on the tackle attempt with #48 Derrek Tuszka, chopping the runner down.

While a physical thumper, Robinson showcased the ability to work off and around blocks as well against the run which is often times the Achilles heel for most ILBs. On this rep, Robinson quickly gets into the gap and side steps the TE attempting to shoot forward and take him out of the play, taking out Ryquell Armstead by the legs for no gain.

While he doesn’t make the tackle on his first attempt in this clip, watch how Robinson stays clean as the TE climbs to the second level to try and pick him up. He keeps his outside leg and arm free and gets in-position to make the tackle, just missing the runner’s leg, but forces him to turn back inside. The rest of the defense rallies and Robinson quickly pops back up to get in on the tackle and stuff the run.

Compared to other undersized ILBs, Robinson has no fear when taking on blocks at the LOS, having the aggressiveness and strength to attack OL and attempt to get off to make plays. Watch this rep where Robinson sheds the block attempt of the RG who loses his balance and quickly redirects to get in on the tackle with #50 Delontae Scott for no gain.

Here is another example of Robinson’s effort in pursuit to the football as well as his willingness to go through the block attempt of an offensive lineman as he sniffs out the quick screen pass to the left. He shoots into the LT who is out in front while getting a piece of the receiver after the catch, helping blow the whole play up in a pinball effect.

Robinson plays with a reckless abandonment you love to see at the position, throwing his body around as he looks for big collisions. Here is yet another example of Robinson mimicking a heat-seeking missile as he reads the counter run and fills the gap, playing through the inside shoulder of the pulling TE and chops down the runner at the LOS, propelling himself into the running back seeking out contact.

While not the most fluid athlete when working sideline to sideline, Robinson plays with a fair amount of effort in his purist and covers ground quickly once he locates the football. Watch this rep where the QB checks down the ball to his WR in the flat. Robinson gets on his horse and books it to the right sideline and sees #37 Donovan Stiner fail to make the tackle initially after the catch as the receiver comes back inside. Robinson then breaks down and shoots his hips into the runner, sandwiching the receiver with Stiner for a modest gain.

The one real negative from Robinson I noticed in his run defense was that he often would shoot himself forward on a diving tackle attempt rather than wrap up the ball carrier and drive his feet on contact. Sure, he was able to bring enough stopping power to drop the runner on the spot in most cases, but every now and then, the runner would break his diving tackle attempt like we see on this play. Still, while you would like to see Robinson finish with more sound technique as a tackler, I appreciate his urgency on this rep to get back up and wrap up the runner right after he misses the tackle attempt, wrapping up his legs and taking him down to the ground.

Overall, it was a strong showing for Mark Robinson who has now strung together two solid performances in preseason play. He is a player that invites contact and violence, always playing with his hair on fire. He does a good job working off blocks and making plays on the football as well as playing with great effort in pursuit and the urgency to get to the football as soon as possible.

While Robinson may only be a seventh-round rookie who has played against a majority of second and third string offenses, I would like to see him get some reps with the first team defense to see how he would fare in terms of his impressive run defense thus far as well as his ability to cover. The Vince Williams comparisons may be premature, but Robinson’s play surely has mirrored that style of play as a junk yard dog type of downhill, physical linebacker.

The Pittsburgh Steelers notably struggled against the run last season and Devin Bush has left a lot to be desired thus far in his two appearances. While he and Robert Spillane are likely to run in-front of Robinson for a majority of the 2022 season, it would be intriguing to see Robinson get some run next to Myles Jack and see how he would fare. Pittsburgh needs to be better against the run compared to last year, and if they want to put the best defenders out on the field to get the job done, there’s a non-zero chance Robinson may be the best candidate based on his play.

What are your thoughts on Mark Robinson? Do you think that he has exceeded expectations thus far in the preseason? Should he get some run with the first team defense to see if he can help bolster the run defense for Pittsburgh? Please leave your thoughts in the comments section below and thanks again for reading!