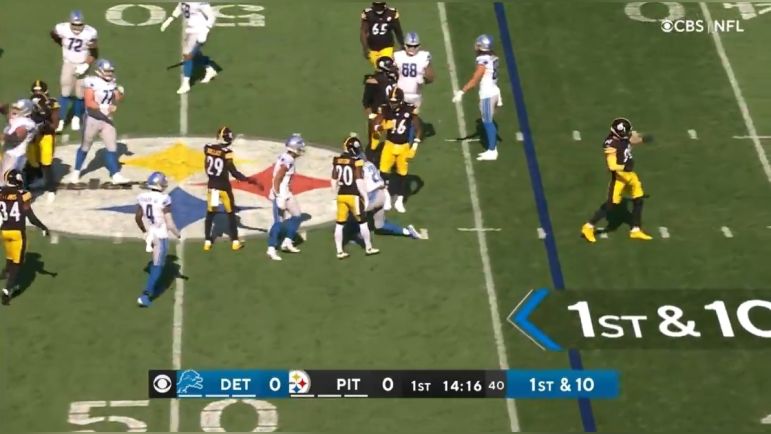 T.J. Watt’s play wasn’t under close examination in Sunday’s preseason finale against the Detroit Lions. But it’s still impossible to ignore. Though I’d argue he played too much in that game, leaving because of a minor knee injury, he certainly made plays before exiting.

While Watt’s lauded for his pass rush, a record-tying 22.5 sacks last season, his run defense shouldn’t be overlooked. He isn’t a one-trick pony and teams know it’s hard to run at him, especially if a tight end is going to block him. Logically, most teams try to run away from him. But that can prove just as dangerous. There aren’t many in the league better at squeezing backside runs like Watt with burst and closing speed to stop the back from cutting upfield. On the first drive alone Sunday, he made one of those stops. Let’s take a look.

Third down. Power run to the left here, the tight end and the right guard pulling. The right tackle is trying to seal Watt off backside here with a hinge block. But Watt’s so quick upfield that he beats the block and gets into the backfield, running hard to take down the running back by the ankles.

Take a look at it from the aerial view. The running back literally takes two steps before he’s tackled. Nothing he can do. That’s how quickly Watt flies in.

That’s what Watt does consistently each year. Here’s two examples I quickly pulled up a year ago of him making tackles for losses on the backside of runs. Teams find out pretty quickly you can’t leave this guy unblocked and think he’s not going to make an impact.

The best thing teams can do to combat Watt here is by executing bootlegs, actually running them and faking it. That slows down and hold the backside player and makes him play less aggressively, needing to respect the threat of that boot. If the opposing offense boots and the backside player crashes down, the quarterback has plenty of time, the chance to run, and the linebacker has missed the chance for a free and easy pressure. Zone-running offenses are the best at this since the marry the run and pass game so well. It all looks the same.

Beyond that, Watt’s going to make an impact. Whether you’re running at him or not. It makes him a complete player and one of the game’s most dominant, down-to-down players.