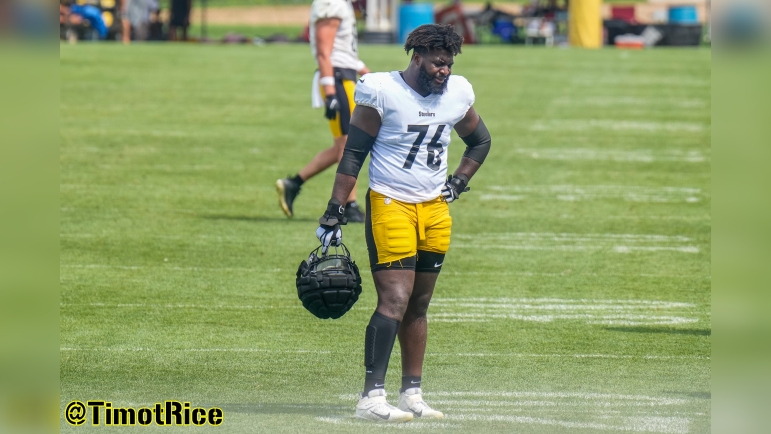 The Pittsburgh Steelers enter Monday with a rather somber feeling despite coming off a win Saturday night against the Jacksonville Jaguars. Well, at least the offensive line is anyway after the poor performance that they put on tape against Jacksonville, notably being called out by head coach Mike Tomlin after the game for failing to provide Mitch Trubisky an opportunity to prove himself out there with the first team offense as he was under duress the entire time he was on the field.

RT Chukwuma Okorafor reiterated those statements on Monday, stating that the play from his unit upfront wasn’t good enough to meet the bar of the expectations they have for themselves this season.

“Bad play from the offensive line, everywhere,” Okorafor said on video via Steelers Live’s Twitter Page. “Technique, Technique. There is someone every play that isn’t using what coach showed us.”

Tomlin reportedly called out the offensive line after the game Saturday for their performance according to G Kendrick Green, putting them on the board and had them review the tape to address their play this weekend. As Chuks mentioned above, there seemed to be something going wrong on nearly every play whether it be miscommunication on twists and stunts, failure to get a body on a defender in the running game, or lack of execution to what new OL Coach Pat Meyer has been teaching this unit in terms of technique.

I don't view Arden Key as a power rusher at all, but he gave #Steelers LG Kendrick Green fits inside on Saturday. Dumped into the lap of Mitch Trubisky. Decent attempt at anchoring midway through rep, but just not strong enough. pic.twitter.com/upLytxRkHo

Given the statements provided by Tomlin, Green, Mason Cole, and Okorafor so far, the whole offensive line recognizes that this level of play is unacceptable for a team that notably struggled up front last season. The thought was that an additional year of development for the guys in house as well as the additions of James Daniels and Mason Cole would help this unit become at least middle of the pack, but Saturday’s performance was a red stain on the ledger for what was supposed to be a better 2022 season.

It’s clear the message has been sent to the entire team and the offensive line specifically that those struggles upfront need to be addressed. However, while the message may have been received by the offensive line, the question remains whether they have the personnel to turn this thing around prior to the start of the regular season.