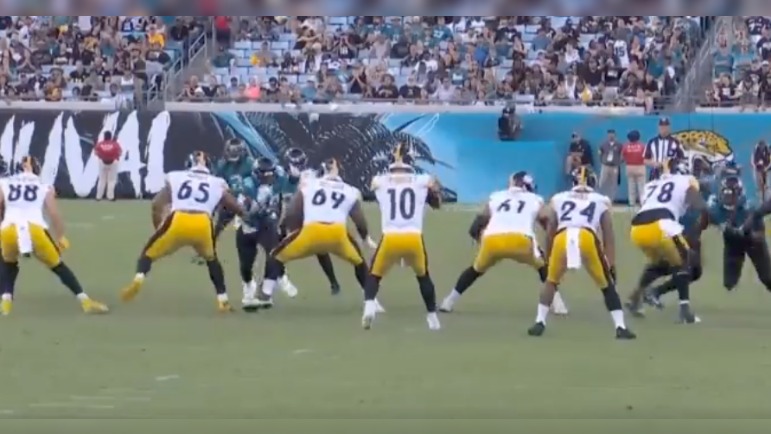 Mitch Trubisky may not have had the same excitement in his brief performance Saturday night for the Pittsburgh Steelers, but according to Mike Tomlin, that wasn’t necessarily his fault.

Speaking to the media in a press conference following their 16-15 victory over the Jacksonville Jaguars, Tomlin was asked about Trubisky’s performance as the team’s starting QB for the second straight week this preseason.

“I thought Mitch played well,” Tomlin said on Trubisky to the media during the press conference which aired live on the team’s YouTube channel. “I thought he created and extended some things when there wasn’t much there. But we got to do a better job of protecting him and having some semblance of a run game if you want a fair evaluation. And I’m just being bluntly honest.”

The way Coach Tomlin sees it, Mitch Trubisky played about as well as you could hope for given the circumstances. He finished the game going 5/8 for 60 yards passing along with one rush for 10 yards. He was constantly under duress from the Jaguars defensive front as the offensive line did little to protect him inside the pocket.

Kenny Pickett coming into the game for Pittsburgh.

Thanks to Trubisky’s mobility and athleticism, he was about to get out of trouble on multiple occasions, making something out of nothing like on that ten-yard scramble. However, the constant pressure he faced the entire time he was in the game was an indictment on the poor play of the offensive line which was supposed to be improved from the unit that took the field a year ago. Despite another year of development from the guys they had in-house and the signing of FAs Mason Cole and James Daniels, the unit looked outmatched both in pass protection as well as in the run game, allowing Trubisky to take unnecessary punishment and the defense to get into the backfield before the runner could reach the LOS.

Most Mitch Trubisky play ever with all due respect 😭😭pic.twitter.com/UETBRzkvtH

It’s difficult to evaluate a QB with no support from the running game and when the offensive line is leaving you out to dry against an opposing defense. This is the case that Tomlin made for Trubisky following the game which is fair given how much the unit struggled during the first half of play. Tomlin also acknowledged to start his presser that the team needed to learn from this game as they couldn’t establish drives and execute, yet another knock on the offensive line. Needless to say, it’s back to the drawing board for a Pittsburgh team that has one more week of preseason play to work out the kinks before they face off against the Cincinnati Bengals in regular season action.