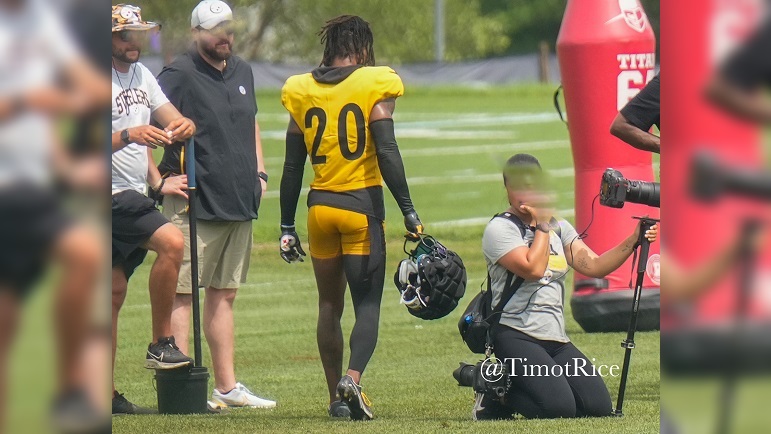 While the Pittsburgh Steelers are holding a closed practice today back in Pittsburgh, we can still learn something from what went down today at the UPMC Rooney Sports Complex. From an injury standpoint, we can provide three updates. In brief footage shown on Steelers’ Live, filmed in Latrobe but with a live look-in back at Pittsburgh, we noticed Sutton suited up in pads during the team’s warmup session. He had a sleeve on his left leg, but the fact he is suited up in some capacity is a great sign.

Sutton left midway through Thursday’s practice with what Mike Tomlin deemed a “lower body” injury. Sutton appeared to injure himself on the first play of seven shots. He finished out the session but looked labored in 1v1 before coming off the field. But the injury does not seem like it will cost him any time, a great sign for him and the secondary.

Elsewhere, we noticed ILB Marcus Allen and TE Pat Freiermuth still not in pads. Both are dealing with hamstring injuries. Freiermuth seems very close to a return and could come back by Monday’s practice after the team’s off day Sunday. Allen still seems at least a week away and may miss the preseason opener on August 13th. It’ll hurt his chances in a competitive ILB battle.

Mike Tomlin spoke with reporters after practice and said injuries were “status quo” but noted Sutton’s ailment is not serious. Per the PPG’s Ray Fittipaldo, Tomlin also said Chase Claypool is close to returning, something we’ve noted in our daily reports.

Status quo with all Steelers injuries. Tomlin said Cam Sutton’s injury is not serious. Chase Claypool is close to returning

Per a team transcript, Tomlin also said FS Minkah Fitzpatrick had “increased participation.” He was activated off NFI but worked in limited fashion Thursday, taking part in individual/positional sessions before his day ended.

The team’s next practice is set for Monday and runs through Thursday, with a Friday walkthrough and its first preseason game Saturday night.