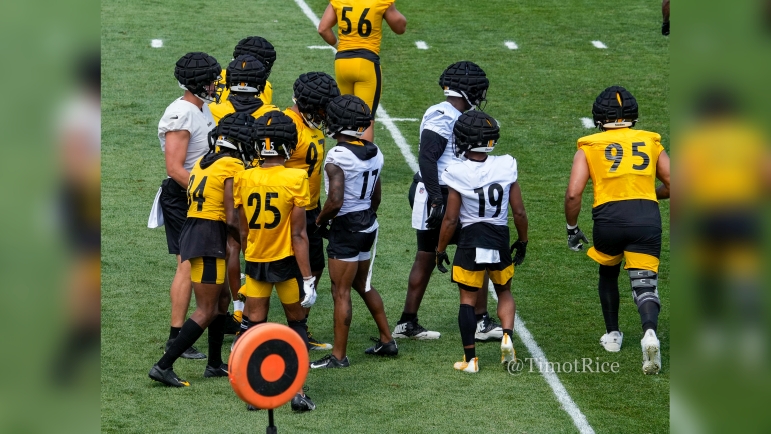 Things have been a little chippy to start off training camp at Saint Vincent College for the Pittsburgh Steelers. Several fights have broken out over the last few days involving DL Carlos Davis and OL Jake Dixon as well as RB Benny Snell and DL Cam Heyward.

If Heyward had his way, the fights wouldn’t be something the team would actively try to prevent happening.

On the latest edition of the Not Just Football With Cam Heyward podcast, NBC sportswriter Peter King appeared as a guest on the show and asked Heyward about his skirmish with Snell the other day. When asked by King for the reasoning behind the fight, Heyward was straight up in his response, sharing his personality and how it pertained to his scuffle with his teammate.

“I would say the reason behind the fight is that I’m a chippy person,” Heyward said to King on Not Just Football With Cam Heyward which also aired on YouTube. “I tend to start more things, and most people don’t like it. I think Benny was over the pile and then I gave him a shove and then he gave me a shove and then someone was holding me back. But nobody was holding Benny back. And so, he got a shot in on me and I was like, ‘Oh no, we’re not ending it at that’. And so, I just started to try to race after him and I got kicked out of that drill. So those were my reps for the day. For that drill.”

Been chippy my whole life

Reports of the fight between Heyward and Snell flew onto the social media space after it occurred, only reiterating the trend of the day as multiple skirmishes broke out during Tuesday’s practice session. After the fight between Heyward and Snell, WR Calvin Austin III got into it with OLB T.J. Watt, which probably isn’t a wise decision in the first place. Near the end of practice, DL DeMarvin Leal and OL John Leglue got into it after three straight 1v1 reps, causing tensions to rise and hands to be thrown.

a few scrums today.. OL/DL battle had me turn my attention way across to field and see DeMarvin Leal and John Leglue come to blows in the last set. that ended OL/DL set #steelers @steelers #nfl #herewego #steelernation #steelerscamp pic.twitter.com/z07MyCgO1y

Teams often know fights will break out amongst grown men physically going at it rep after rep in training camp where the heat and environment tend to escalate things to become physical. Still, teams don’t want to see punches being thrown on teammates. Heyward admitted that such occurred in his skirmish will Snell Tuesday.

“Yeah, it’s true,” Heyward responded when asked if punches were thrown. “Yeah, I had to give a little yell at one of my players. I was just like, ‘Don’t hold me back, hold him back so I can get some more shots in’. And that goes for anybody, you know, whoever we’re facing. Obviously, I won’t be fighting in the game, but man, we’re going to attack them. Don’t just hold each other back. Like let’s get our shots in.”

The last thing we need to see this season in another Andre Johnson/Cortland Finnegan situation with the Steelers involved, as multiple players could receive hefty fines and potential suspensions from the league if punches are thrown. Heyward understands this, but also acknowledges that he’s not going to turn the other cheek if some guy on the opposing team swings on him.

I hope no player knowingly tries to square up against a guy like Cam Heyward for their sake (although it would be quite a sight to see). Still, a defense must have an edge about them like the past Steelers defenses that had guys like James Harrison, Jack Lambert, and Greg Lloyd that you wouldn’t want to see in a back alley after dark. Cam Heyward fits that criteria despite his fun-loving nature, being an absolute beast on the football field.

While Pittsburgh shouldn’t be looking to get into fights with other teams, it also should be known that they aren’t going to back down when challenged. In a game where the alpha dogs rule, Heyward, along with T.J. Watt and the other members of the defense, are bringing that intensity and energy to training camp practice, with the intention of bringing Pittsburgh’s defense back to prominence as a unit to be feared in 2022.