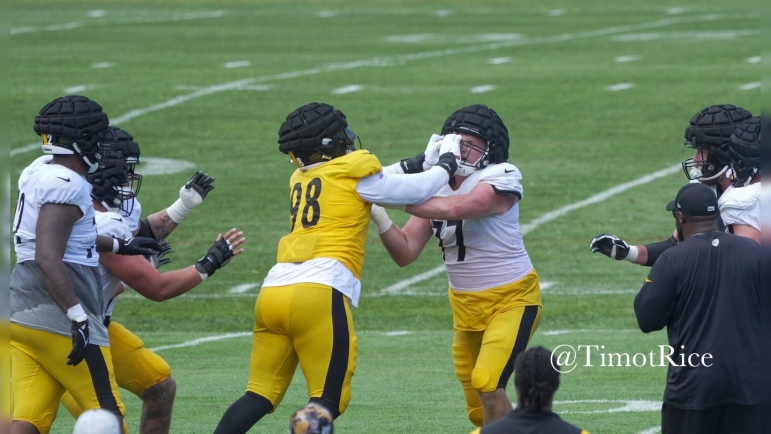 Training camp fights and skirmishes are nothing new this time of year. They’re emblematic of players battling hard under the heat and humidity, trying to fight and claw for a roster spot or role in the team. Tempers flared as much as they ever had during Tuesday’s practice with some small vs big man fisticuffs. Cam Heyward and Benny Snell started things followed by Calvin Austin III – unwisely – trying to pick a fight with T.J. Watt.

Highlights from that last teams. TJ Watt torpedoes thru and Calvin Austin is blasted 5 yards back. What had happen was…. #Steelers @steelers #nfl #herewego #steelernation #steelerscamp @Steelersdepot @Alex_Kozora pic.twitter.com/mo3X820uMZ

Ending the day were two big men going at it: OG John Leglue and DL DeMarvin Leal. In a moment practically egged on by Mike Tomlin, Leglue and Leal squared off three times to finish out OL/DL 1v1s towards the end of practice, right before the final team session of the day. Leal won the first rep with a strong bull rush that got under Leglue’s pads, leading Leglue to take a missed swipe as Leal as he walked away. Tomlin had them go again with the two locking up a second straight time. At this point, the horn had sounded and the skill players, finishing 7v7 on the near field, were already in position for the start of the team, 11v11 work. All eyes were on Leal and Leglue.

Here’s how it went courtesy of our Tim Rice.

a few scrums today.. OL/DL battle had me turn my attention way across to field and see DeMarvin Leal and John Leglue come to blows in the last set. that ended OL/DL set #steelers @steelers #nfl #herewego #steelernation #steelerscamp pic.twitter.com/z07MyCgO1y

Leal ripped through the corner as Leglue tried to seal him up the field. Leal turned back and took a shot at Leglue’s helmet who fired back with a swipe at it. The two wrestled a bit more before Leal grabbed Leglue’s facemask and dragged him to the ground as both lines joined in to separate the two.

It’s a good summary of how the day went. Players practiced angry. That’s not a bad thing and typical during camp and you like to see fire in these guys, though anyone throwing punches or slaps at someone in a helmet is asking to break a bone. Leal is fighting for a role in this defense while Leglue is fighting for a roster spot and neither player is going to take crap from anyone. We’ll see if tomorrow is any calmer but as camp rolls on and the days get long, players start to lose the cheery attitude they entered camp yet. It’ll still be a little bit until the Steelers can take their anger out on an actual opponent. For now, sometimes the other guy in the locker room will feel all your anger.