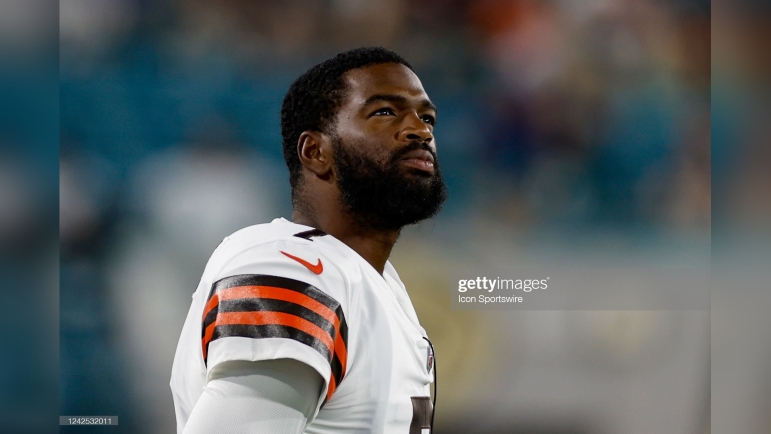 The Cleveland Browns will take the field for the first time today after receiving a final verdict on the punishment for their franchise quarterback, Deshaun Watson, for whom they gave up quite a bounty, including a piece of their soul, in an acquisition that has only grown to look worse over time before he ever plays a meaningful snap.

They know that he will be missing at least the first 11 games of the season, and he will have to submit to mandatory evaluation and therapy as part of his return from suspension, violation of which would be treated as a second offense subject to further disciplinary action.

Before he gets back on the field, however, Cleveland will be running with Jacoby Brissett under center, whom they acquired to be their new backup after dumping their entire quarterback room this offseason. The veteran backup is not unfamiliar with peculiar spot-starting stretches, but he knows he still has to earn his place. Even if publicly, the team has his back.

“We’re excited about Jacoby and have a ton of trust in Jacoby”, Browns head coach Kevin Stefanski told reporters this week after the Watson news came down, via Jake Trotter for ESPN. “I know [the players] have trust in Jacoby”.

Brissett is a 37-game starter in his career, though he’s only 14-23 as the starter of record in those contests. He has played two full seasons, or thereabout, making 15 starts apiece in 2017 and 2019, both with the Indianapolis Colts. He went 7-8 in 2019, the closest he’s come to a winning record, barring the 1-1 finish of his rookie year in New England.

2021 marked a one-year stay in Miami, where he started five of 11 games for the Dolphins, going 2-3. He completed 141 of 225 passes for 1,283 yards with five touchdowns and four interceptions, rushing for 70 yards and a touchdown on 19 attempts.

Brissett will benefit from a good offensive line and running game, even if, for the moment, the Browns’ center position is in a jumble after losing two players there and having released J.C. Tretter earlier in the offseason.

But Nick Chubb and Kareem Hunt will certainly be relied upon in Watson’s absence, and they did acquire Amari Cooper via trade to function as their new number one wide receiver. But there are no illusions that he is some starter-level backup, no matter how much they talk him up.