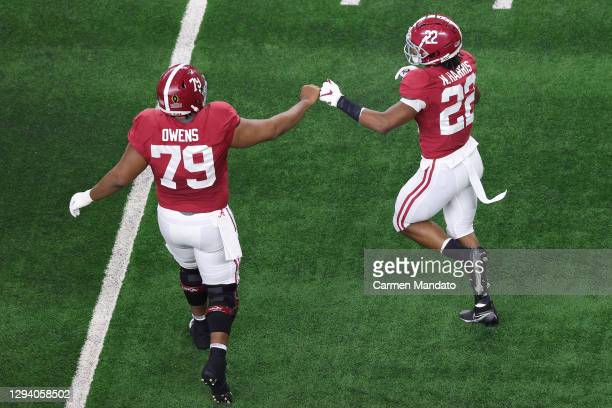 One day, Chris Owens will manage a NFL roster.

Owens is embarking on his first season in the pros, an offensive lineman signed by the Pittsburgh Steelers as an UDFA after this year’s draft. His football roots can be traced to New Orleans. Owens’ family went through Hurricane Katrina in 2005 and though their house, unlike so many others, was spared enough by the storm to move back in, the family packed up and moved west to Texas. There, Owens began playing football not in the hopes of making it to the NFL but with the goal of making friends in his new neighborhood.

“One of my friends was actually with the Panthers now, Dre Harper,” Owens told me in an interview last week. “He asked if I could join his little league team and [my mom] was like, ‘yeah, I’ve been looking for him to do stuff anyways.’ So I went out there and for me originally, it was just to make friends, but I ended up being kind of good at it.”

He became better than good. Owens turned into a four-star recruit with offers from big schools all over the country, BYU to Pittsburgh to staying in his home state of Texas with the Longhorns or Red Raiders. But he settled on Nick Saban and Alabama.

In high school, he was the school’s starting right tackle. At Alabama, if you’re not starting, you better bring value elsewhere. Owens became the line’s Swiss Army Knife, playing tackle, center, and a bit of guard. Biding his time as a backup his first three seasons, including a freshman year redshirt, opportunity came calling in 2019. Owens opened the season as the team’s starting center as the Crimson Tide put up over 500 yards to blowout Duke 42-3. But his season took a turn a month into the year, tearing the meniscus in his knee. While recovering, Florida State transfer Landon Dickerson took his place and blossomed into one of football’s top centers. Owens got healthy but his spot was taken. It would’ve been easy to be jaded but the two became best friends bound by a common goal: win a National Title.

“I feel like some of my family were a little upset at first. I explained to them Landon is one of my best friends. There’s no animosity between me and Landon. So I don’t root against him. At the end of day we want to win championship. So whatever that takes.

Owens took the change of plans more maturely than most college players with a rational perspective.

Owens would get that opportunity through the most unfortunate of circumstances. Dickerson tore his ACL in the 2020 SEC Title Game against Florida, putting Owens back in the lineup for the team’s playoff run. Dickerson was a key cog in the team’s undefeated season but Owens played admirably. Alabama dominated Ohio State in the Title Game and in the game’s waning moments, Dickerson took the field. He was the center for the final kneeldown snaps, a tremendous moment for him and for the team. It was a plan the players secretly in place, Owens says Nick Saban wasn’t even aware of it until it was happening. And in a moment of true selflessness, instead of taking the final victory formation snaps in a National Title victory, Owens came off the field. Not with his head down but with a hug for Dickerson.

Owens explained how that moment came together.

“If I’m being honest, we knew we were gonna win the game. Just based off of our preparation. I have a lot of faith in Mac Jones and he told us, ‘look, if you guys handle what you’re supposed to do, there’s no doubt I’m throwing for like 400 yards.'”

Jones did better than that. He threw for 464 yards and five touchdowns while Najee Harris ran for two more scores and caught one of Jones’ TD passes. Then it was Dickerson’s moment to shine.

“We kind of knew when we get towards the end of the game and we’re winning the championship, Landon was like, ‘would you mind if I got in?’ I was like, ‘dude, honestly, you came in as a transfer, you took over the team. Everyone loves you. I could care less. I just wanna win. So if you get the last snaps it’s not like I’m gonna be any type of way.’ And notably, that was his last snap as a college player. So we kind of had a plan in the event that if we were in the place that we believed that we were in to win the game, that he would get the last snap…he had never won any real big games at Florida State. This was his first opportunity as a playoff player and he deserved to share that moment just as much as we all did.”

Dickerson went on to be the Philadelphia Eagles’ second round pick. This past season, Owens returned to the starting lineup as the team’s starting right tackle for 12 of them and at center for the other. Despite versatility, experience, and good length for his frame, Owens fell out of this year’s draft. Sure, teams began to call late on Day Three but no one called his name. The draft was over but it didn’t take more than 90 seconds for his phone to ring. Pittsburgh was on the other line.

“Once the draft [ended], I still had nothing. So I was like, ‘okay, it’s coming at some point.’ I believe a UFC promo thing came on and a minute-and-a-half into it, my agent called and he started singing the song ‘Black and Yellow’ by Wiz Khalifa.”

Owens’ agent said there may be other offers and in all likelihood, other teams would’ve called. But Owens knew Pittsburgh was the place for him. The sheer fact the Steelers offered him a deal came as a surprise. Aside from seeing Kevin Colbert at Alabama’s Pro Day, Owens had no communication with the team throughout the pre-draft process.

“I’ve always grown up as a Coach Tomlin fan. My mom would always say, when you get in trouble, you should be mentored by Coach Tomlin someday. Knowing how many former teammates that I have on the Steelers, the type of stuff I’ve heard about them as far as like the way they run their organization. I didn’t even think twice about it. I was like, ‘yes.'”

One of those former-turned-current teammates is running back Najee Harris. An offensive lineman will do his job no matter who’s in the backfield. But it’s hard to beat the guys who’ve run behind Owens. At Alabama, he had Josh Jacobs, Damien Harris, Najee Harris, and Brian Robinson. Now in the NFL, he reunites with Harris, a talented workhorse back coming off a good rookie year. Owens admits there’s an extra boost of confidence blocking for a guy, so long as the line holds up their end of the bargain, will get the job done.

“You have confidence that guy’s not dancing around in the backfield. He’s one who hits the hole. He believes in the line, the o-line believes in him. We know if it’s fourth and one, fourth and two, third and one that he’s gonna get it. Even if we don’t block as well, we know something’s gonna happen. A guy like Najee might break five tackles in the backfield and still get the first down. It’s definitely good to have a stud back there.”

Evaluating Owens the most this summer will be his o-line coach Pat Meyer. The Steelers’ third positional coach in three years, Meyer replaces Adrian Klemm and comes over after spending two years with the Carolina Panthers. Owens expressed a similar sentiment as others, praising Meyer’s quiet, teach-first approach but with an aggressive mindset.

“I like Coach Meyer. One of my [Alabama teammates Deonte Brown] had him last year. He spoke really highly of him. He speaks in sound bites, so everything he says, you can remember it. First significant contact. Set, punch, extend. I like how thorough he is. How he explains everything. He keeps it as simple as possible.”

Meyer isn’t a cookie-cutter coach teaching the same technique for two differently built players. He tweaks things depending on the player’s skillset, a big guy versus a smaller, quicker guy.

“He shows us a variety of players doing these things. So maybe if you’re not a quick guy, like some people or maybe you’re a bigger, powerful guy, he has a clip of that guy doing the same thing as that smaller guy did. He has a way of relating everything back to the injuries and having a way everyone can relate footwork and technique.”

Pittsburgh has been playing him at guard throughout the spring but like at Alabama, Owens knows maximizing his versatility, being able to step in anywhere along the line will be key. It’s what kept John Leglue around last year and earned him his first NFL starts.

Owens hopes his post-NFL days won’t come for years. But when he moves on with life’s work, he doesn’t plan to remove himself too far from the game with the hopes of becoming a future NFL GM.

“Obviously I wanna play football and make a substantial living and have a lot of success on the field. But I love football so much that even if I’m not able to play, you know, 12, 14, even 10 years, football is something I can stay around even if I’m not physically in it. So being in the front office role where you can draft players, you’re responsible for contracts, the negotiations, whether it’s with a big-time player or some of your other staff on the team. Kinda having a hand in everything, having the challenge of, okay, maybe you’re at a struggling franchise. Can you build that franchise up?”

His younger days playing Madden planted that seed and he loved franchise mode so much he focused more on the offseason than playing out the games. Like many Madden players, he agreed today’s version of the game is a far cry of what it used to be. The game’s golden age was nearly two decades ago.

This year, Owens will have the chance to do something more than play Madden. He could be in the game. That means making it through the summer and carving out a spot on the team be it the 53-man roster or practice squad. Being an undrafted player puts him on the outside-looking-in. But Owens understands what he has to do in order to make a lasting impression.

“[I want to show] I can pick up the playbook fast and that I can compete because I believe that’s the most important thing that Coach to wants to see. He wants to see guys that can take the meeting room to the field. He wants guys that are gonna show up to work, not have external distractions and he wants guys that can compete. I’ve been in a competitive environment pretty much all my football life. And I wanna show that’s carried over and not just that I can compete, but I can also play at a high level and not just be satisfied with being there or just be satisfied with being on the field.”