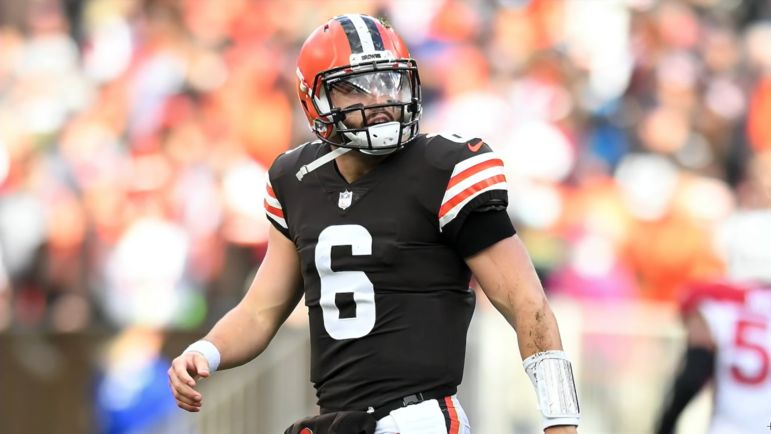 The Cleveland Browns are trading quarterback Baker Mayfield to the Carolina Panthers, according to Ian Rapoport of the NFL Network.

A new QB in Carolina: The #Panthers are acquiring former No. 1 overall pick Baker Mayfield from the #Browns for a 2024 conditional 5th-round draft pick, sources tell me and @TomPelissero. Deal is pending a physical. All parties split the financials to make it happen. pic.twitter.com/xuTLqosmZm

The Panthers are acquiring Mayfield from the Browns for a 2024 conditional fifth-round draft pick, according to Ian Rapoport. The deal is pending a physical and all parties will split the financials to make the trade happen. The Browns will pay Mayfield $10.5 million this season and the Panthers will pay Mayfield around $5 million. Mayfield agreed to trim around $3.5 million off his base salary, per reports.

More: The #Browns will pay Baker Mayfield $10.5 million this season, which means they trimmed over $8 million in cash and salary-cap space. The #Panthers will pay Mayfield ~$5 million. Mayfield agreed to trim ~$3.5 million off his base salary.

It has been known for several months now that Mayfield was likely to be traded after the Browns dealt for quarterback Deshaun Watson earlier in the offseason. Watson still faces a possible lengthy suspension to start the 2022 regular season and the result of that happening would be Jacoby Brissett being the team’s starter. The Browns, by the way, open up the 2022 regular season on the road against the Panthers.

With Mayfield now with the Panthers, it will be interesting to see what they do with quarterback Sam Darnold, who is scheduled to earn $18.858 million in 2022. That money is fully guaranteed. The Panthers also drafted quarterback Matt Corral out of Mississippi in the third round this year.

Mayfield, the Browns’ No. 1 overall pick in the 2018 NFL Draft out of Oklahoma, had been Cleveland’s starting quarterback for the last four seasons. For his NFL career to date, Mayfield has thrown for 14,125 yards, 92 touchdowns and 56 interceptions for an 87.8 passer rating. Last season, Mayfield was injured and it resulted in his worst season as a professional. That prompted the Browns to attempt to replace him this offseason.

Darnold was selected two picks after Mayfield in the 2018 NFL Draft out of USC. To date, Darnold has thrown for 10,624 yards, 54 touchdowns and 52 interceptions for a 76.9 quarterback rating.