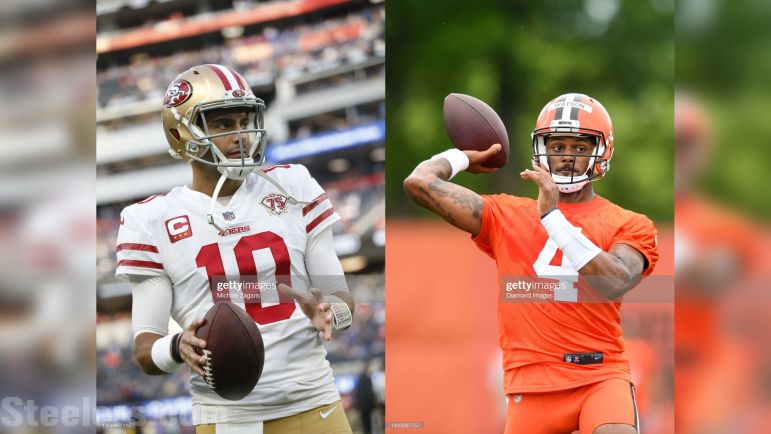 While the NFL world still awaits upon news about Cleveland Browns quarterback Deshaun Watson and whether and how long he gets suspended, it doesn’t sound as though there is any ambiguity within the organization over who their quarterback would be for whatever time Watson might miss.

Following a report by Doug Kyed suggesting that the Browns could reconsider the possibility of attempting to trade for Jimmy Garoppolo from the San Francisco 49ers, Cleveland.com reporter Mary Kay Cabot is indicating the opposite, saying that they have no intention of going after him.

The San Francisco 49ers formally granted Garoppolo permission to pursue a trade yesterday, even though it had been long suspected he would be traded this offseason after they drafted Trey Lance in the first round in 2021.

With the possibility of Watson missing half the season or more via suspension, the thinking was that the Browns might want to go after a more established starter as an interim quarterback, like Garoppolo, but Cabot reports that their intention is to continue on with Jacoby Brissett as their starter for whatever length of time that might be.

“The Browns are still not expected to pursue a trade for Jimmy Garoppolo even with the uncertainty over Deshaun Watson’s suspension”, she writes. “The Browns never seriously considered trading for Garoppolo this offseason, even before Watson hit the trade market in March when a grand jury declined to indict him on criminal charges”.

The report that the team was never interested in Garoppolo conflicts with what Kyed indicated, but Cabot is the Browns beat writer, even if her track record could be a bit spotty. While it’s unclear exactly who to believe, I might be inclined to believe the local source here.

The sense early on was that the Browns would have been comfortable continuing on with Baker Mayfield as their quarterback if they could not upgrade the position, and I think most would agree that Garoppolo is not exactly an upgrade over Mayfield, or at least not one significant enough to eat millions of dollars as they have with their former first-overall pick’s deal this offseason.

We still do not know when to expect NFL-NFLPA disciplinary officer Sue Robinson’s decision about whether or not he should serve a suspension this season, examining four of the couple dozen cases of female massage therapists who have sued him, accusing him of sexual misconduct. Training camp is less than a week away, and it’s not guaranteed that anybody will know by then.

The growing feeling, though, is that while he will not be suspended for the entire season, he is likely to miss a good chunk of time this year, in the range of eight games or so. Assuming that is correct, and that they do not have interest in Garoppolo, then the Pittsburgh Steelers are likely to see Brissett in Week 8 in 2022 at…Acrisure Stadium. That’s weird to write.