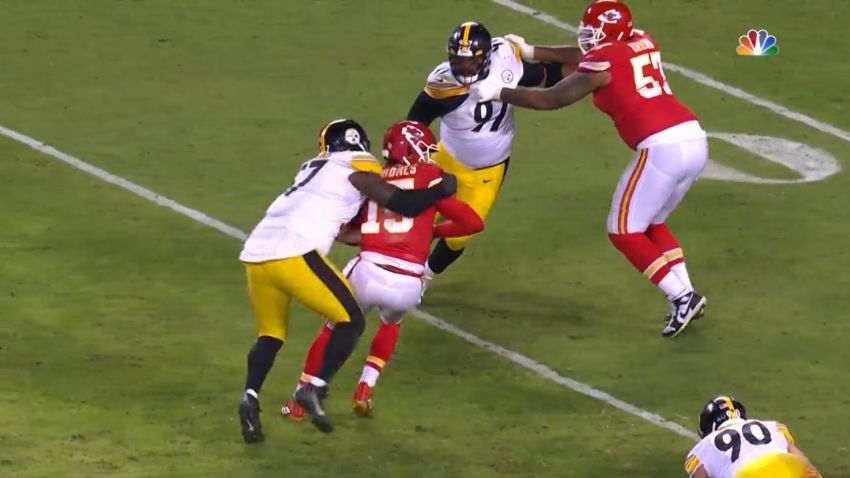 Heading in 2022, the Pittsburgh Steelers defensive line room is in a way different place than in was in the middle of the 2021 campaign. We now know that Stephon Tuitt won’t be back with the team this season, calling it a career and retiring. However, Tyson Alualu has rehabbed from his ankle injury last season and has committed to playing in 2022, adding much-needed experience and depth upfront.  The team also brought back Montravius Adams on a two-year deal this offseason and drafted DeMarvin Leal in the third round in the 2022 NFL Draft. Pittsburgh also just recently added Larry Ogunjobi on a one-year deal, rounding out a room with Cam Heyward, Chris Wormley, and Isaiahh Loudermilk also on the roster.

For years, the Pittsburgh Steelers have traditionally kept six defensive linemen on their 53-man roster. However, for those counting at home, there are seven names listed above, making the numbers game does not work out if Pittsburgh intends to stay status quo as they have been in years past. Now change could be on the horizon for Pittsburgh, as all seven names listed above deserve to make the roster. Pittsburgh could figuratively take a roster spot from the OLB or ILB core that aren’t as deep with quality talent and allocate that to a seventh DL. Still, if the Steelers want to keep six, tough decisions will have to be made.

On the most recent edition of The Terrible Podcast with Dave and Alex, the two settled on Montravius Adams as the most-likely candidate to get the boot if the team does intend to keep only six DL in 2022. This is no slight to Adams, as he provided a spark for a struggling defensive line last season when being signed off the New Orleans Saints practice squad last year. Still, the move makes sense for several reasons.

First, while Pittsburgh does re-sign Adams this offseason to a two-year deal this offseason worth $5 million, the contract would be pretty easy for Pittsburgh to get out of if they did release Adams, incurring only a dead cap penalty of $732,500 as a post-June 1 cut according to OverTheCap.

Second, while many would suggest Isaiahh Loudermilk would be another name that likely could be on the bubble due to his low dead money hit, Loudermilk is only entering his second year and profiles more as a traditional base DE, having the size and length Pittsburgh desires at the position, promoting them to trade up in the 2021 NFL Draft to select him. With Chris Wormley’s contract up after this season, Loudermilk figures to be in-contention with Leal to fill that role as a starter opposite of Heyward in 2023 if Pittsburgh chooses not to retain Wormley after the season.

Finally, while the same could be said for Adams potentially taking Alualu’s role in 2023 as  potential starter at NT, Pittsburgh just added Ogunjobi on a one-year pact worth up to $8 million. Given that he profiles more as a DT than DE, it’s quite plausible that Pittsburgh could re-sign Ogunjobi to replace Alualu as the starting NT who can kick outside in Pittsburgh’s base defense if he plays well in 2022. Looking at the numbers game, with four listed base DEs (Heyward, Wormley, Loudermilk, and Leal) and two tackles (Alualu and Ogunjobi) Adams is the likely man out.

If Pittsburgh were to try and revert one defensive lineman to the practice squad after cutting him, the most likely candidates to make it would be Adams or Loudermilk. Still, both would be candidates to be claimed by other teams. Still, as a journeyman for most of his NFL career, Adams has a better chance of sneaking on the practice squad than Loudermilk who is heading into his second season and has the youth and measurables that teams look for at the position. Hopefully, this is all-for-naught, and Pittsburgh decides to keep all seven for 2022. Still, if one of them were to get their walking papers, my money would likely be on Adams being the odd man out.

What are your thoughts on the addition of Larry Ogunjobi and the impact it has on the Steelers DL room? Do you think that the team will look to keep six like they have done in the past, or do you think that there is a chance that Pittsburgh will make an exception and keep seven in 2022? Do you agree that Adams is the one that will get his walking papers if they indeed only keep six? What is your reasoning? Please leave your thoughts in the comments section below and thanks again for reading!