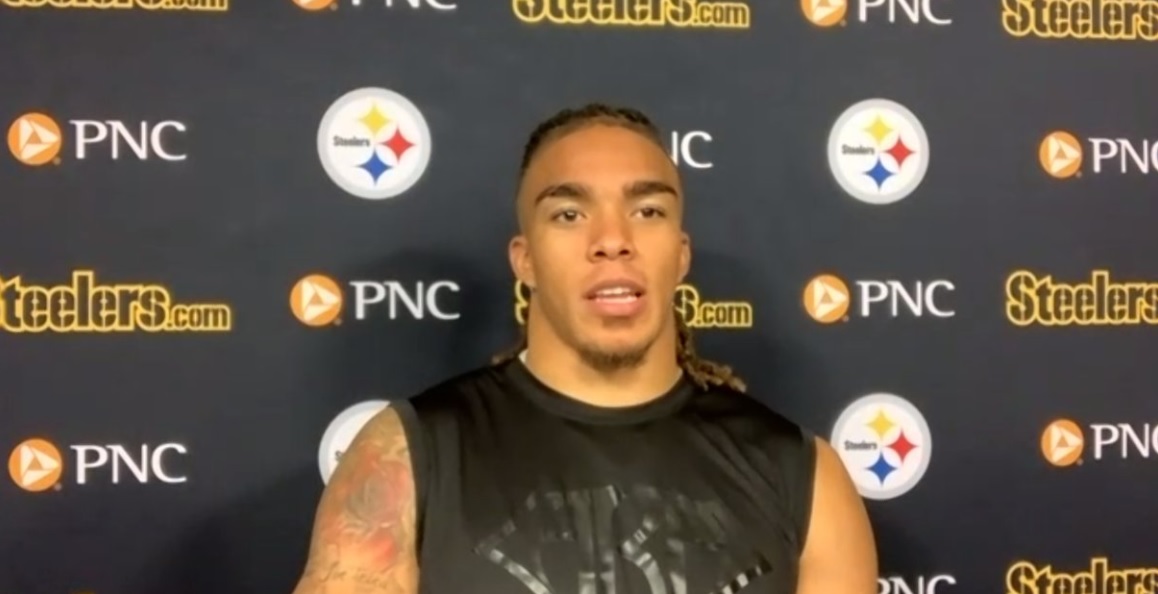 WR Chase Claypool spoke to the media Wednesday afternoon at the conclusion of the second day of mandatory minicamp, discussing several topics brought up including his usage in the slot, moving around the formation based on the defense they face, the development of the rookie receivers.

When asked the question about how Kenny Pickett and Mitch Trubisky are adapting to their new environment in Pittsburgh and if anything has surprised him thus far, Claypool made sure to praise Pickett’s understanding of the playbook on video via Steelers.com.

Chase Claypool on the rookie receivers, Diontae Johnson, the quarterbacks, working out in the offseason and more. pic.twitter.com/tiXzBOpjI1

“Kenny’s understanding of the playbook early on,” Claypool initially responded to the question. “He knows everything, like even there is sometimes I’m like ‘Yo, what do I have here?’ because we have some new plays going and he’ll tell me right away so that’s cool.”

This isn’t the first time that the topic of new plays and new terminology being installed in the offense, as Matt Canada addressed the topic yesterday when he spoke to the media. Still, for Pickett to be up to date on a playbook that has been altered since and is even giving the veterans some difficulty in terms of adjusting to the new terms and schemes being implemented, it’s encouraging that he has picked it up as quickly as he has.

Granted, Pickett ran a similar style offense to what Canada wants to do with the Steelers, so there should be some overlap for the rookie passer. However, Pickett made sure to point out that he’s not completely familiar with the concepts in the new system and is trying his best to be as prepared as he can to learn Canada’s concepts and execute the offense in its entirety.

After Claypool spoke highly of Pickett and being a quick study, he made sure to dap up his new teammate Mitch Trubisky and the leadership role he’s taken on since coming to Pittsburgh.

“Mitch is really easy to talk to,” Claypool continued. “He always invites us over anytime we’re around. He’s welcoming us with open arms and he just feels like family already.”

Claypool’s comments on Trubisky being a great fit so far in Pittsburgh come on the heels of fellow WR Diontae Johnson talking up his growing relationship with Trubisky and how great of a dude he is. Trubisky even invited a majority of the skill position guys out to his Florida home shortly after signing with Pittsburgh to run routes together and hang out in hopes of developing chemistry with his new teammates.

Claypool was one of the guys confirmed to go to South Florida to participate in the throwing sessions, having the opportunity to get a rapport with Trubisky well before OTAs and mandatory minicamp got underway. Claypool’s statement about hanging out with Trubisky off the field also can be confirmed, as the two have gone golfing together just a couple days ago in-between practice sessions.

It looks as if Claypool has been a very welcoming presence to the new QBs in the room and that both Pickett and Trubisky have done the same to some degree, whether it be being prepared on the football field or looking to build a friendship off the field. Either way, it appears that Pickett or Trubisky will be the starting QB once the regular season gets underway, and for Claypool to be developing a good connection with both QBs can only be a good thing for an offense that desperately needs him to produce in a similar fashion to his rookie season in 2020 this season.