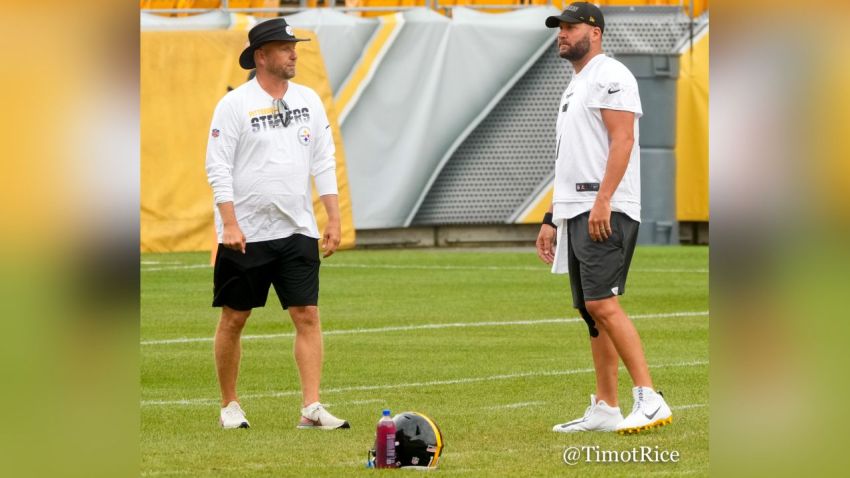 Change is a-comin’ to the Pittsburgh Steelers’ offense…well, sort of. And it depends a bit on whom you ask. At the very least, while offensive coordinator Matt Canada won’t come out and say what changes are being made visually, everybody is at least acknowledging that this is closer to what Canada intends to run—including his own terminology.

A number of Steelers offensive players have acknowledged this recently, including wide receiver Diontae Johnson, who spoke to reporters for the first time yesterday during minicamp. “Coming in, it’s just the terminology’s different”, he said. Of the offense itself, he said, “It’s not different, just the terminology. Really just getting comfortable with things. I’m feeling comfortable right now”.

Recently, quarterback Mason Rudolph, the longest-tenured member of the offense, also acknowledged the change in verbiage, though he didn’t call it a Rosetta Stone offense. “There’s some new terminology”, he said. “Had to make some flashcards, to a little flashcard studying at the house, but I think it’s gonna make us all better, and seeing some of the new concepts on the field, it gets you excited”.

Fullback Derek Watt also acknowledged the changes coming while speaking to Joe Rutter of the Pittsburgh Tribune-Review, again, citing terminology differences, but also schemes, even if there is “a good amount of carryover” from last season’s offense, with Canada in his first year as offensive coordinator.

Speaking of Canada, he also acknowledged the change in verbiage—and mentioned specifically that old verbiage was kept last year for the benefit of former quarterback Ben Roethlisberger. “It is different in a sense, possibly, that we’ve now evolved and we’re calling things a little bit differently that we might have kept, because he had 18 years of experience”, he said. “But a lot of the plays are exactly the same”.

The Steelers ousted Bruce Arians as offensive coordinator in 2012 and thrust Todd Haley upon Roethlisberger that year. It was by far the most radical shift in offensive philosophy that he ever experienced in his career, and he repeatedly made subtle and not-so-subtle references to being less than thrilled about being forced to learn a new offense—especially the new terminology.

“I walked into the rooms to see what was kind of going on and I thought I picked up a Rosetta Stone book”, he said of his first encounter with Haley’s playbook. “Yeah, I see some stuff and we’re going to need to meet this week, trust me, because we’ve got to figure some stuff out”.

Of course, when you have a quarterback room consisting of three new quarterbacks and one veteran of the offense, it figures to be a good time to adopt new terminology. Two new starters along the offensive line, as well, and most of the other starters are still young, going into their second or third seasons.

If the plays remain largely the same, that’s what matters most, especially for the younger players. Calling them different things and utilizing them in different contexts and combinations, that’s a natural progression that shouldn’t be too difficult to handle.