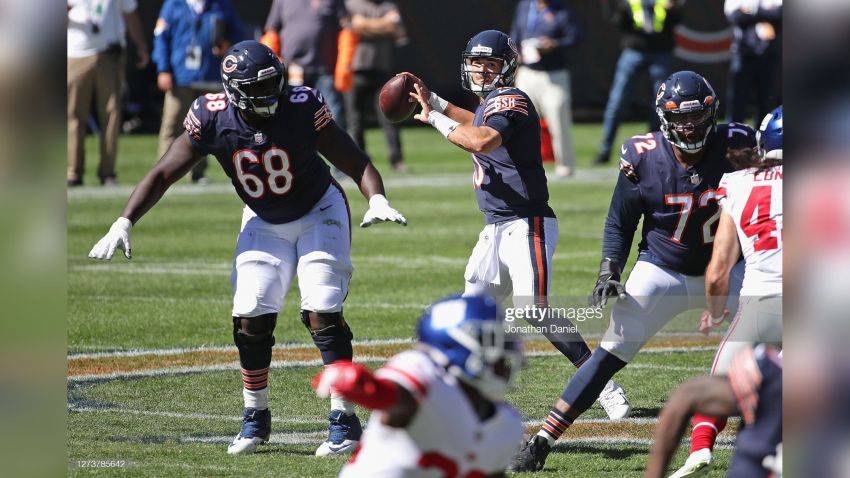 The offseason examinations continue for the new faces added to the Steelers roster. This time we’re going to look at the free agent signing of Mitchell Trubisky. Recently a breakdown was posted on Kenny Pickett’s attempts by route during his final season in college. The QB competition is in full effect with the element of how both will fit within the design of the offense. For now, let’s get into how Trubisky has fared on his attempts as a pro.

First, a reminder on the most targeted routes last season under Matt Canada’s guidance:

In looking at Trubisky’s career numbers below, the Hitch, Out, and Crossing routes are also his most-targeted. Trubisky’s rating on those routes is somewhat pedestrian compared to his others, though. On Slant routes for example, Trubisky has an impressive rating over his career. 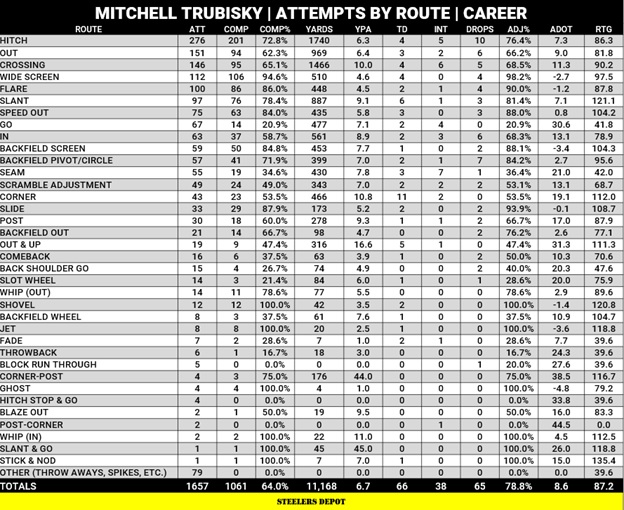 One other route which Trubisky has had success with is the Wide Screen. His 98.2% adjusted completion rate ranks fifth-best since entering the league in 2017. For comparison’s sake, Ben Roethlisberger ranked 29th in adjusted completion percentage at 92.9% on Wide Screens during the same timeframe. Roethlisberger also had the second-most attempts since 2017 including postseason play. The Wide Screen has been frequently targeted within the Steelers’ offense for years. In judging how Canada designs his play calling, chances are this trend will continue to hold true. If curious on how Pickett fared in college with this route, he completed 35 of 37 attempts.

Another notable route Trubisky has excelled with is the Corner route. The completion percentage isn’t high, but it’s the route he’s thrown the most touchdowns on. In comparing to Roethlisberger once again, his totals since 2017 were 19 completions on 52 attempts (36.5%) with five touchdowns, a passer rating of 89.7, and league low 6.0 YPA.

Perhaps we see more Corner routes targeted within the design of Matt Canada’s offense this season when Trubisky is on the field. It’s a route in which Pickett had little experience targeting at Pitt, completing just one pass on four attempts.

A route that is all but certain to carry a high number of attempts in the Steelers’ offense again in 2022 is the Slant. Considering how often it was targeted last season, coupled with both Trubisky’s and Pickett’s history, it would make since if they were providing feedback to get even more Slants involved. The interesting part within the design of the Slant routes for the Steelers’ offense this season will involve depth. Last season the ADOT was just 4.8 yards. Trubisky’s ADOT over his career on this route is 7.1 yards per attempt, and Pickett’s in college was 9.0 yards.

An area of concern with Trubisky is with Go and Seam routes. Of his 38 career INT’s, 11 have come when targeting these routes downfield. Based on tendencies from last year, the Go route is part of offensive plan under Canada. Throwing downfield isn’t necessarily a weakness for Trubisky as he’s impressed on Out & Up attempts over the course of his career.

As a team last season, Pittsburgh was second to last in terms of overall ADOT. If Trubisky continues to struggle on typical downfield routes though, Matt Canada may be less hesitant on deep routes with Trubisky at the controls.

Overall, Trubisky provides some obvious strengths in certain routes he targets. Factoring his career numbers, he seems like a fit in Matt Canada’s based on the highest-targeted routes last season. He also has his weaknesses, but with a collection of new receivers, perhaps he will experience more success on downfield routes.