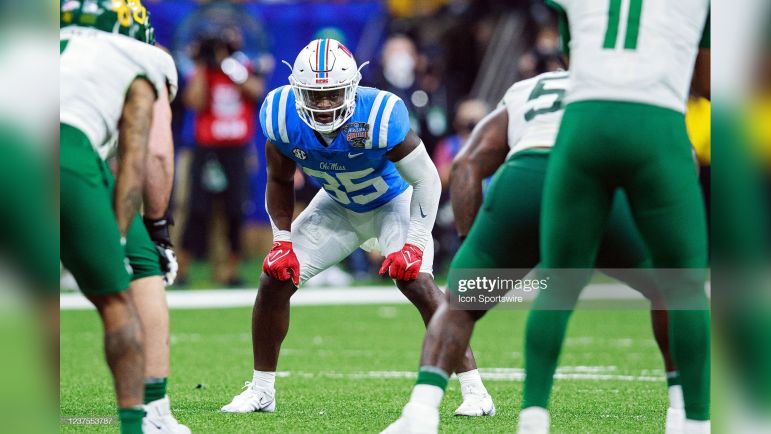 The Pittsburgh Steelers selected Ole Miss LB Mark Robinson with the 225th pick of the 2022 NFL Draft, the first of the team’s two seventh-round selections. The selection of Robinson shouldn’t have come as a shock to anyone reading the tea leaves during the pre-draft process as Robinson was brought in for a pre-draft visit, often a tell-tale sign of potential interest for a draft selection or as a potential UDFA signing. This prompted Andrew Shaver of Steelers Depot to do a pre-draft profile on Robinson, highlighting his prowess as a physical run defender despite moving from running back to linebacker this past season, starting nine of 13 games played for the Rebel defense.

GM Kevin Colbert agreed with Shaver’s sentiments during an interview on SiriusXM Radio in terms of being a good tackler, but also shared Shaver’s thoughts about Robinson’s current skill set when it comes to pass coverage:

He’s an explosive tackler. That’s the one thing that stuck out about Mark. He’s gonna have to learn how to play in coverage, but his downhill abilities were very impressive, and the impact he hits folks with really caught our attention.

Shaver stated in his pre-draft profile on Robinson that there were “many instances of covering vacant space in zone coverage”. When going back and watching several games of Robinson this past season at Ole Miss, you recognize what Shaver is referring to here. There are several instances where he drops into the middle of the field in zone coverage, having his eyes glued in the backfield on the QB almost like in a spy role which honestly could have been the case in some situations. Still, like on this play against Tennessee, Robinson is slow to recognize and pick up receiver running through his area, occupying space with no one around as the WR finds space in-between defenders for the first down.

We see a similar situation here at the end of the game where Robinson drops back into the deep left hash and has the ball fly over his head as he attempts to locate the receiver behind him after having his eyes in the backfield, falling behind the pass and not in position to contest the catch as the receiver nearly picks up the first.

Shaver also points out in his pre-draft profile that Robinson “has moments of difficulty locating coverage assignment” which we clearly see in the clips above. Here is another example against Texas A&M of Robinson struggling to properly locate and cover his assignment as he drops back with TE #85 Jalen Wydermyer running his route toward the middle of the field. Instead of closing the space between he and the receiver as he enters his zone, Robinson proceeds to keep backpedaling, having his eyes glued again in the backfield until the QB throws the football and Wydermyer catches the pass in-front of Robinson. To top it off, Robinson slips in open space as he tries to break on the pass, allowing the TE to pick up the first down.

Still, there are some instances on tape where you can’t really blame Robinson for coverage breaks based on the throw by the QB or what he was asked to do. Watch this rep against Alabama where Robinson makes his zone drop to the left hash, splitting the difference between #8 John Metchie III and #18 Slade Bolden. Robinson breaks to close space on Bolden once Metchie breaks toward the sideline and #9 Bryce Young steps into his throw to Bolden, but Young releases the ball before Bolden comes out of his break, making it nearly impossible for Robinson to break up the pass as he arrives simultaneously as the ball does to tackle the receiver.

After the selection of Robinson, DC Teryl Austin made sure to recognize his rawness in coverage, but stated that learning to play backwards in the NFL level can be difficult for seasoned college linebackers as well as a one-year starter like Robinson:

“Most rookie linebackers, struggle in coverage, with the different types of coverage, the amount of coverages that go on in the NFL,” said Austin.  “But I do expect that he’ll pick it up and while he’s learning to do all those things, he’ll be a dynamite special teams player for us.”

While there are moments that Robinson does appear to be lost in coverage or merely occupying space, he also showcased moments where he was aware of his assignment and executed it effectively. Take, for example, this play against the Crimson Tide where Robinson lines up off the LOS in the nickel and jams John Metchie off the line at the snap of the ball. He then says in-front of him until Young shows that he his throwing the ball to the right sideline where Robinson leaves Metchie and breaks for Bolden toward the sideline.

Here is another good example from the same game where Robinson starts to come on the blitz with his coverage assignment #4 Brian Robinson staying home to pass protect. However, he recognizes Robinson leaving the pocket on a delay route to the flat as the check down and immediately redirects his forward rush to push up the back in coverage, taking away Young’s check down and forces him to try and scramble out of the pocket, leading to a coverage sack on the play.

While not necessarily a coverage play, you do see Robinson’s aggressive, downhill style show up on underneath passes and screens near the LOS. He shows great pursuit of the football once thrown, closing ground quickly between he and the receiver in attempt to limit yardage gained after the catch. Watch this play Robinson makes on the screen pass to #1 Jameson Williams, quickly redirecting to the ball and chops Williams down behind the LOS for a small loss on the play.

Overall, there is no denying that Robinson needs some work as a coverage defender as he was mainly asked to occupy space in the middle of the field or in the flats, being slow to pick up receivers running towards his area due to his tendency to keep his gaze locked into the backfield. Should he play on passing downs at the NFL level, opposing offenses will certainly take advantage of this unless his instincts and play recognition improve.

Still, while Robinson does need to develop more as a pass coverage defender, there is some truth to what Austin said about all linebackers having to adjust from the college game to the pros. Buddy Johnson struggled to get a helmet last season on defense as a rookie due to the steep learning curve despite being a productive multi-year starter at Texas A&M. Former first-round pick Devin Bush struggled mightily in coverage last season, looking lost at times in terms of picking up receivers in zone coverage and playing in space. This isn’t meant to give Robinson a pass but seeing as he has only played the position for a year, there should be hope that he can continue to develop in this area.

Austin put it best when saying that Robinson will have the opportunity to learn more about being an adequate pass coverage defender as well as other facets of his game as he contributes as a “dynamic special teams player” for Pittsburgh. Thus, I think it is fair to say that Robinson’s coverage ability won’t be the thing that makes of breaks his chances of making the roster, but rather if he can prove to supplant the likes of UG3, Marcus Allen, or Robert Spillane on the roster as a core special teamer that may have more upside going forward than what we already know those players to be at the NFL level.

What are your thoughts on Mark Robinson in coverage? Do you think that he is a lost cause, or do you think that there is “meat on the bone’ for him to develop into an adequate player in that facet of his game? Do you see his chances of making the 53-man roster hurt by his coverage capabilities, or do you see that there may not be much difference between he and other linebackers on the roster in that aspect? Please leave your thoughts in the comments section and thanks again for reading!