Today I wanted to provide data on the Pittsburgh Steelers draft history since 2010. The goal of the article is to point out trends by position using draft position and relative athletic scores (RAS) and see what that could mean for this years’ draft. To qualify for a RAS score, a player must have a total of six recorded metrics from any of the following: Height, Weight, Forty-yard dash, Twenty-yard split, Ten-yard split, Bench Press, Vertical Jump, Broad Jump, Short Shuttle, and 3-Cone. The player is then graded on each in comparison to the positional database since 1987 to get more of a feel of their size, speed, explosion, agility, and total value, giving context to the raw numbers. 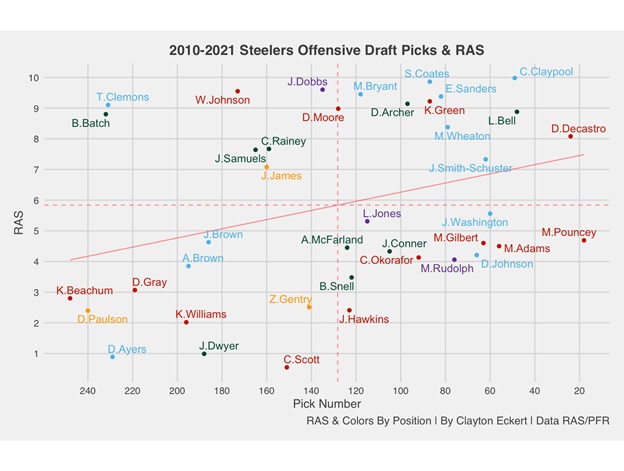 With the players colored by position, we can see wide receiver jumps out at the top right of the graph with six of the ten Steelers above the mean in RAS and picked in the first half of the draft. The highest RAS regardless of position is 2020 second round pick Chase Claypool at 9.98, and five out of the nine players with an above nine RAS were wide receivers. An interesting takeaway is the bottom right, with Diontae Johnson and James Washington seemingly starting a new wide receiver trend since 2018 with Day 1-2 picks having a below seven RAS. In the time period only four players were drafted in the back half of the draft, with three out of those four having a below average RAS and interestingly each of these picks being 2016 or earlier. De’Marcus Ayers was a seventh round pick in 2016 and an outlier to Alex Kozora’s “What The Steelers Look For”  thresholds, contributing to the lowest RAS of 0.89, and the second lowest was 2010 6th round pick Antonio Brown at 3.85. No 2022 prospects I’ve studied at the position have a lower score than Ayers, and out of curiosity the scores below Brown include: Tulsa’s Josh Johnson, Virginia Tech’s Tre Turner, NC State’s Emeka Emezie, and Clemson’s Justin Ross who has received plenty of interest with Steelers positional coach Frisman Jackson putting him through his pro day work out along with Mike Tomlin and Kevin Colbert in attendance.

As expected, offensive lineman land mostly below the mean in RAS (9/13) and wanted to note that Kevin Dotson didn’t qualify. Two players land above the mean in both data points and the other five selected in the first half of the draft had a below five RAS. In the back half of the draft, two out of six players have a strong RAS highlighted by 2014 fifth round draft pick Wesley Johnson’s position high 9.55 RAS, and the other four having scores below four. The lowest offensive line RAS was 2010 fifth round pick Chris Scott at 0.55, and 2011 sixth round pick Keith Williams had the second lowest 2.02 RAS. No 2022 prospect I’ve studied have a lower score than either player, and for comparison here are the players with below three scores: Oklahoma’s Tyrese Robinson, BYU’s James Empey, Minnesota’s Daniel Faalele who also had Steelers position coach Pat Meyer at his workout, and Arkansas’ Myron Cunningham.

The only other players above the mean in both data points were running backs. Two of the nine players at the position had drastically different NFL careers, Le’Veon Bell and Dri Archer who tops the position with a 9.14 RAS and was a size outlier at the position. Unfortunately, Najee Harris didn’t qualify, and would likely have been telling to see him stack up next to Bell, who was the only other pick in the top two rounds at the position. On the bottom right we see three players that each have a below five RAS, were drafted in the third and fourth rounds, and interestingly since 2017. Three out of four players drafted in the back half of the draft had an above seven RAS, with the other being 2010 sixth round pick Jonathan Dwyer at a position low 0.99 RAS. The second lowest was 2019 fourth round pick Benny Snell’s 3.48 RAS. No 2022 prospect I’ve studied have a lower RAS than Dwyer, and only two men I’ve studied have scores below Snell: Notre Dame’s Kyren Williams and Oregon’s CJ Verdell.

Three quarterbacks were drafted in the time frame, each in the third and fourth rounds. Joshua Dobbs led the group by far with a 9.6 RAS, with Landry Jones landing at 5.31, and Mason Rudolph with a 4.06. The only 2022 prospect I’ve studied with a lower result was Western Michigan’s Kaleb Eleby at a much lower 1.68 RAS.

Five tight ends were drafted since 2010, but Rob Blanchflower and Pat Freiermuth unfortunately didn’t qualify. The three players that did qualify were selected in the back half of the draft, with 2015 fifth round pick Jesse James having the highest 7.08 RAS. The other two had below three scores with 2012 seventh round pick David Paulson having the lowest 2.4 RAS. Three players I’ve studied have a lower RAS: Kansas State’s Nick Lenners, Texas A&M’s Jalen Wydermyer, and Boston College’s Trae Barry who both had below two scores.

Now for the defense: 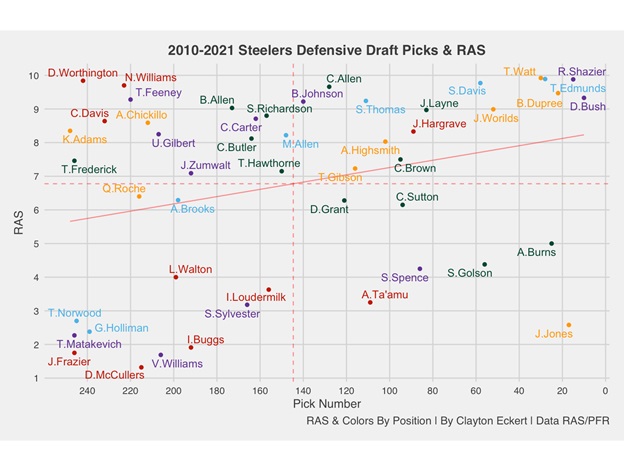 Right away we see a high percentage of players at the top of the graph highlighting the stronger emphasis of athleticism the Steelers have selected on this side of the ball. 13 players have an above nine RAS with a higher RAS mean line near seven for the defense, compared to the offense which was just below six.

Edge rusher jumps out at the top right of the graph, with five of the 15 Steelers that landed above the mean in both data points. The highest RAS regardless of position on defense is 2017 first round pick T.J. Watt at 9.92, with fellow first rounder Bud Dupree in 2015 having the only other above nine RAS for edge rushers at 9.47. A huge takeaway is eight out of nine players at the position land above the tread line (diagonal line), highlighting a strong correlation with RAS to draft position. The one buck in this trend was Jarvis Jones in 2013, selected with the highest pick number at the position and by far the lowest RAS at 2.58, and 2021 sixth round pick Quincy Roche had the second lowest at nearly four points higher with a 6.4 RAS! The only 2022 prospect I have studied at the position with a lower score than Jones was Arkansas’ Tre Williams. Out of curiosity, the 2022 prospects I’ve studied with a lower score than Roche include: South Carolina’s Kingsley Enagbre, Penn State’s Jesse Luketa, Utah’s Mika Tafua, Notre Dame’s Myron Tagovailoa-Amosa, Fresno State’s Arron Mosby, UCF’s Big Kat Bryant, and Williams.

Three safeties land above the mean in both data points, with Terrell Edmunds leading the group in draft position and a 9.89 RAS. We also see the four players selected in the top 150 with an above eight RAS. This position has a similar trend to the edge rushers, with five of the seven players above the tread line and all above a six RAS. The other two were in the seventh round, with the RAS diving below three.  The lowest score was 2015 pick Gerod Holliman in the seventh round with a 2.38 RAS. The only 2022 prospect that I have studied at the position with a lower score is Oregon’s Verone McKinley.

Two linebackers land at the top right of the graph, the top two selections on either side of the ball for the Steelers in the period. Ryan Shazier was drafted in 2014 and tops the position with a 9.88 RAS along with Devin Bush in 2019 with a 9.33 score. Three out of the four players selected in the top 150 at the position had an above nine RAS, with the exception being an above four score. In the later rounds, four of seven players had an above seven RAS. The lowest score was 2013 sixth round pick Vince Williams with a 1.69 RAS, and the second lowest was 2016 seventh rounder Tyler Matakevich at 2.27. No 2022 prospect I’ve studied had a RAS lower than Williams, and out of curiosity the only two players with scores below Matakevich were Idaho’s Tre Walker and Michigan’s Josh Ross. The Steelers have interest in the latter considering their pro day dinner, plus Mike Tomlin and Kevin Colbert at his pro day.

The cornerback position has only seen one first round pick since 2010, Artie Burns in 2016 who had a five RAS, which was the third worst out of 13 players at the position. Also, four out of seven players selected at the front end of the draft had a below the mean RAS, highlighting less emphasis on athleticism in the earlier rounds than other positions. Eight players had an above seven RAS, with only three in the top 150 picks. All five players in the back half of the draft also had above seven scores, highlighting a strong late round trend. The lowest score and outlier to in Kozora’s workout thresholds is 2015 second rounder Senquez Golson, who has a 4.38 RAS which is the highest floor of any position on offense or defense! The 2022 prospects that I’ve studied with lower scores are Arkansas’ Montaric Brown, Utah State’s Kyle Mayberry, Virginia Tech’s Jermaine Waller, Boston College’s Brandon Sebastian, Oregon’s Mykael Wright, and Georgia’s Derion Kendrick.

Defensive lineman land at interesting points on the visual and unfortunately the two highest selections, 2011 first rounder Cameron Heyward and 2014 second rounder Stephon Tuitt didn’t qualify. This left the right side of the chart bare at the position, with only two players qualifying in the 3-4 round. 2016 third rounder Javon Hargrave was the only player at the position above the mean in both data points. Eight of the ten qualifying players were selected in the fifth round or later, three of which had a strong RAS highlighted by 2010 seventh round pick Doug Worthington’s 9.84 result. The lowest score was 2014 seventh rounder Daniel McCullers with a 1.32 RAS, with the second lowest result a 1.75 from 2018 seventh rounder Joshua Frazier. Of the players I’ve studied, three 2022 prospects had a lower score at the position than McCullers: Kentucky’s Marquan McCall, Louisiana’s Tayland Humphrey, and LSU’s Neil Farrell Jr.