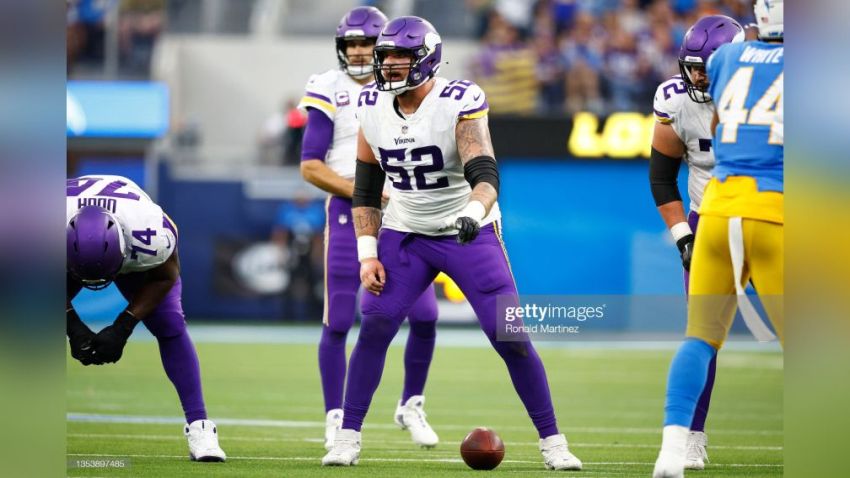 The Pittsburgh Steelers have been busy in free agency, including the signing of offensive lineman Mason Cole, and today I wanted to provide some data context to what he has done in his career so far. Let’s get right to it, starting with 2021 blocking grades from Pro Football Focus: 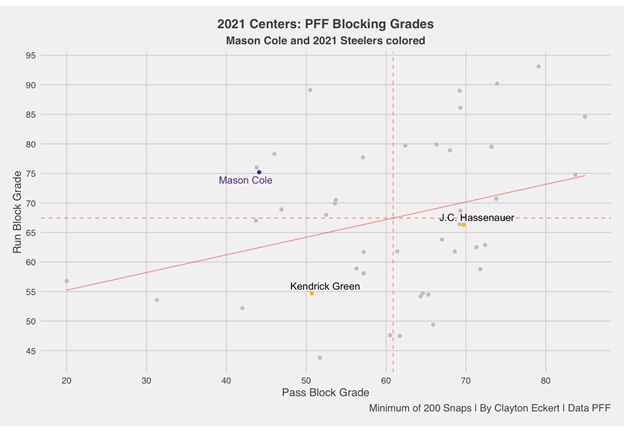 Comparing Cole’s 2021 season in Minnesota to the NFL and Steelers we get some interesting context, starting with being the strongest run blocker of the colored players and ranking 14th out of 45 players on the graph! This highlights the refreshing priority the Steelers put into run blocking for the offensive line, with Cole being solid in that regard last season. It will be interesting to see if he wins a starting job and if this quality of play carries over, with his strong 75.2 run block grade in 2021 being the best mark of his career by far.

He was well below the mean as a pass blocker with a very low grade of 44.1 though, which was the sixth-worst grade ranking 40th! Also seeing where he compares to the Steelers players as a pass blocker is discouraging to say the least, especially considering Pittsburgh center Kendrick Green was graded better in an overall rough season to put it mildly. Last season Cole played 257 snaps at center, 210 at right guard, and four as an in-line tight end. He brought team value with no penalties and allowed two sacks, which tied for his highest season mark. So, a season with clear strengths and weaknesses.

Now let’s look at the rest of Cole’s career, starting with his rookie year and 2020 when PFF also graded him at center: 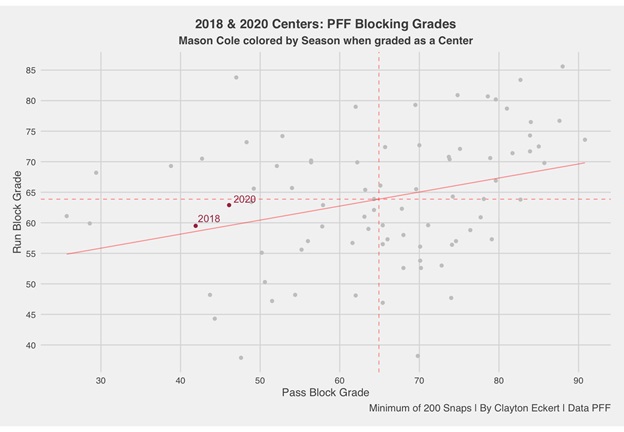 Right away we can see the below the mean ranks in both data points in his time with Arizona at center. Cole has never surpassed a 50 pass block grade at the position, along with ranking 74th and 78th out of 82 players in 2018 and 2020! We can also see Cole’s run blocking grades were below average with the better mark in 2020, which was hopefully the start of the positive trend to the Vikings that will continue in Pittsburgh. 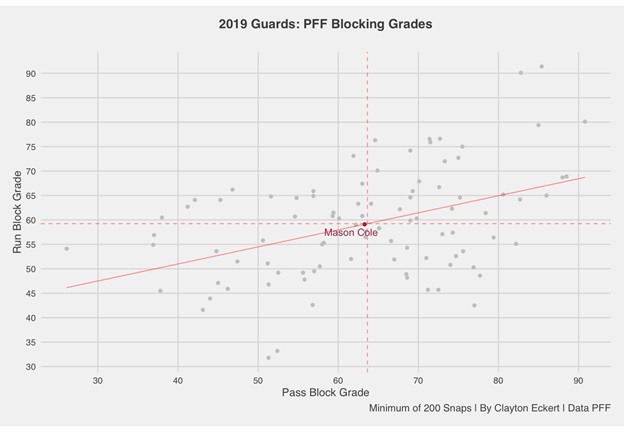 Cole lands virtually at the mean on the graph, having his strongest pass block grade of his career by far at 63.3. He also had his lowest run block grade in 2019 as well, so this is definitely interesting information when considering his positional experience. Cole played the fewest total snaps of his career though, most at left guard with 149 snaps, 47 at right guard, seven at center, one at left tackle, and four as an in-line tight end.

Overall, the data highlights Cole’s strength as a run blocker that has improved steadily through his career, but has struggled as a pass blocker with the exception being in 2019 as a guard. He has experience at all the interior offensive line positions, mostly at center with 2,119 snaps, 257 at right guard, 149 at left guard, along with eight at in-line tight end, and one at left tackle. At a minimum, this was needed depth to the weakest link of the 2021 offense.

In an unusually aggressive and active free agency with ample cap space, it will be interesting to see how the pieces come together for Pittsburgh in 2022, and what Cole’s time looks like in the black and gold.