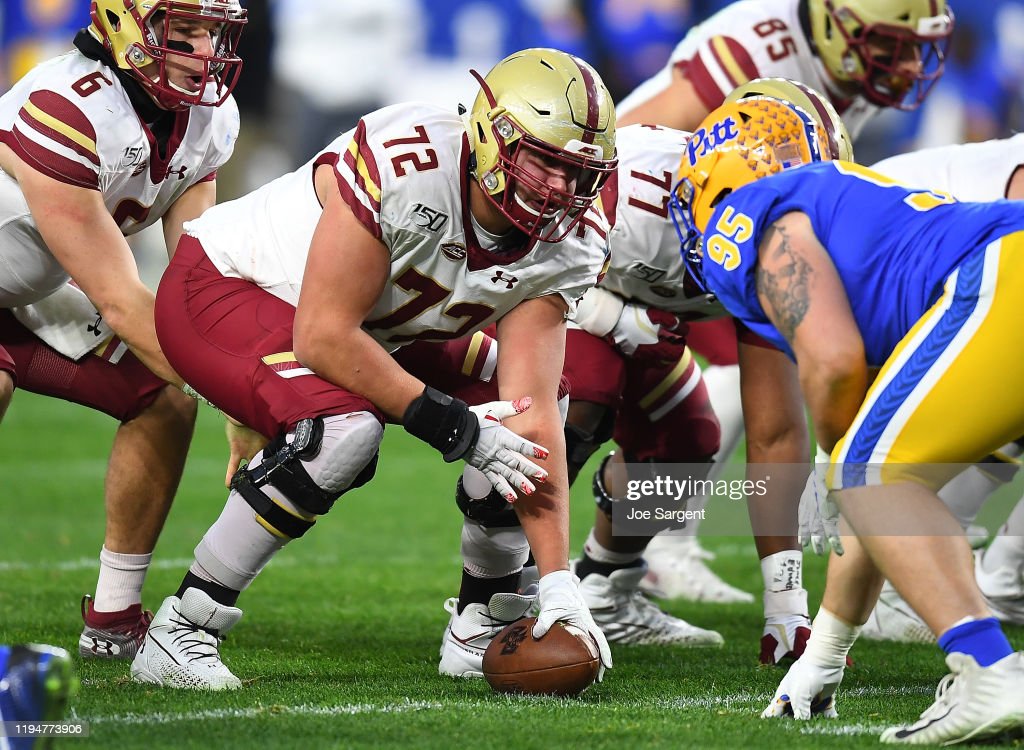 As we close in on the 2022 NFL Draft, new mock drafts have been released almost daily.  One name that routinely shows up in the third to fifth rounds is Boston College center Alec Lindstrom.  I had the opportunity to sit down with the top ranked interior lineman at the 2022 East West Shrine Bowl in the Luxor Hotel Velvet Lounge.  And even though the AFC Championship game was on the TV, he gave me his full attention and shared his thoughts on football, family, academics and even food.

As Alec explained, growing up his whole life has been about football and he certainly has a serious pedigree.  His father played defensive end in the NFL for San Francisco and Tampa Bay for four years in the 1980s.  His uncle Dave played for the Kansas City Chiefs for nine years and his uncle Eric played for the Patriots for a year and then played in Spain as well.  He always planned to play defensive end, as they all had.  His older brother offensive guard Chris Lindstrom, a first round pick by the Atlanta Falcons in 2019, was the first to move to the opposite trench and Alec followed his lead.

Lindstrom loved football from day 1.  His father was a high school coach and Alec and Chris went from building forts out of football pads to putting them on for game day at Boston College.  They played side by side for two years, which Alec describes as an “unreal feeling” and an extraordinary opportunity.  Despite a foot injury that derailed his rookie season, Chris has been one of the NFL’s top guards, giving up zero sacks last season.  He has also been a role model and a great help to Alec as he prepares for the draft and a pro career:

“[Chris] watches all my film and gives me tips on how to get better, watching my stuff here [at the Shrine Bowl practice].  And as you can tell I did a lot better day today in pass rush.  Yesterday was okay, but not great and today I thought I had a really good day. He looked at the all-22.  I sent him the videos and he looked at it and gave me some tips.  And I had a lot better day because I always want to get better and he always wants to see me get better.”

Lindstrom (#72) used good hand position to move the defender back on Day 3 of the East West Shrine Bowl practice:

During the week of the practice in Las Vegas, Lindstrom proved his versatility, moving from his natural position at center to both right and left guard and even filling in at long snapper.  He believes that playing multiple positions will improve his chances to earn a roster spot.  Although he played center his entire career at Boston College, he understands that.

“To be really successful, you gotta be able to play multiple positions. So going from center to guard and really any interior offensive alignment positions, that that will help me get on field faster, and help a team win.  Wherever I can be used, I’ll do it.”

Lindstrom is willing to play any position on the offensive line but shared that he feels more comfortable at right guard than on the left.

In his three years as a starter in Boston, Lindstrom had the benefit of working on a stable line with fellow teammates guard Zion Johnson and tackle Tyler Vrabel, who are both in this draft class as well.  I asked if the head coaching change midway through his college career impacted his growth.  He responded that change can always be scary but having the confidence in himself and the guys next to him made the transition easy.  He remarked that offensive line is a unique position because all five players rely on each other to succeed as a unit.  He emphasized the chemistry of this line and the trust they had in each other.

At the center position, pass blocking is his strong suit.  We talked about his potential for improving his run blocking and areas that he wants to focus on.  He acknowledged that he is on the smaller size for an NFL center at 6’3” and 300 pounds but doesn’t plan to gain weight to play at the next level.  He referenced other NFL centers of a similar size who have found success, including former Steelers center Maurkice Pouncey and current starters Eagles Jason Kelce and Patriots David Andrews.  Lindstrom believes that playing smarter, not heavier, is the answer:

“I know I’m not gonna be able to out-physical them.  I need to play to my advantage, scheme-wise.  I’m a smaller guy, so I like to get the D lineman running.  So sometimes that down the hill running is where I struggle.  But again, I think as long as I keep getting stronger and keep working and using that mental part of the games to my advantage, like positional leverage, where can I get them to move?  So I can come back here and kind of gain that one little advantage for running back to get by.”

And Lindstrom is excited to keep working.  He was animated talking about technique and how he continuously trains to improve his game with repetition and drills.  He mentioned the importance of throwing his hands precisely rather than wildly and creating muscle memory to do that instinctively.  This is also an area where regular film review with his brother gives him an advantage.

Alec has a reputation as a cerebral player, a key trait for a center, and is looking forward to the challenge of a more complex game at the NFL level.  He enjoys the chess match of anticipating what the defense will bring and finding his advantage in that matchup.  His enthusiasm to keep learning and improving his game is clear.  While much of his job is second nature, he is excited about going up against defensive linemen in the NFL and trying to beat them both in pregame preparation and execution on the field.  When asked about his process from the huddle to the snap and beyond, Lindstrom rattles off his decision-making and you can imagine him drawing it on the white board.  It’s clear that he is a student of the game and thrives on the strategy aspect.  He is also proud of achieving his degree in business while pursuing his football career.

In the Shrine Bowl game, Lindstrom showed good awareness and had a nice downfield block to help spring running back Pierre Strong for a long touchdown run after catching it out of the backfield:

As far as what team might be the best fit, he wouldn’t say but did share this: “I love the outside zone. I love zone scheme plays. Again, I’m not as big of a guy and there’s a lot more thinking and running and athleticism to those kind of things.”  He added that he would be comfortable in other schemes as well but has not really looked at specific teams as possible landing places.  He prefers to take his path to the draft one day at a time, trying to improve each day as he moves from the Shrine Bowl to the Combine, his Pro Day and finally, the draft.

He was the runner-up behind Iowa’s Tyler Linderbaum for the Rimington Trophy, given annually to college’s top center.  While Linderbaum is predicted to be a first round pick, Lindstrom’s draft rank is less clear.  In response to my question of whether he has been given any projections of where he might be picked, he admitted that it’s impossible not to think about it but his agent has advised him not to worry about it.  Instead, he has tried to play his best football and see what happens rather than get caught up in distractions.  For him, the reward for getting drafted in any round is the chance to compete.

Since we met, Lindstrom had a strong performance at the NFL Combine and showed his skills at his Pro Day on March 25th, where Steelers area scout Dave Petett was in attendance.  While it is unlikely that the Steelers will draft another center on the second or third day of the draft, it’s certain that Alec Lindstrom will hear his name called and have the chance to play in the NFL, following in the footsteps of his father, brother and uncles.

You can also check out our own Tyler Wise’s NFL draft profile on Alec Lindstrom here.