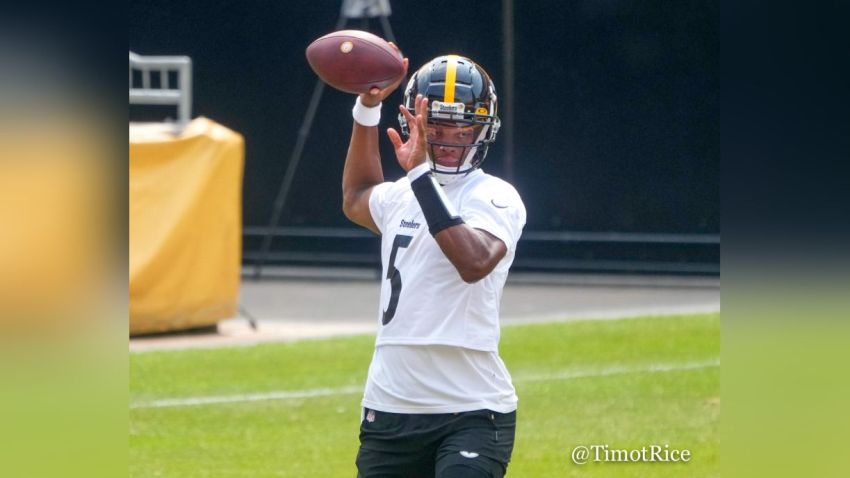 Over the weekend, the Pittsburgh Steelers lost a trio of free agent wide receivers to other teams: JuJu Smith-Schuster (Chiefs), Ray-Ray McCloud (49ers), and James Washington (Cowboys). The team could be in danger of losing another unrestricted free agent in QB Josh Dobbs. According to Pro Football Network’s Aaron Wilson, the New England Patriots tried out Dobbs Monday.

Dobbs missed the entire 2021 regular season due to a toe injury suffered during the preseason. Despite spending the season on IR, Dobbs was still a positive presence for the team, often seen sitting next to Ben Roethlisberger and QBs Coach Mike Sullivan on the bench mid-game to go over photos and strategy.

Despite the Steelers’ need for a quarterback, it felt unlikely Dobbs would return, at least not without exploring his other options. He struggled to receive reps in the 2021 training camp and admitted to being frustrated by the lack of playing time as Mason Rudolph and Dwayne Haskins fought it out in front of him. There were several days where Dobbs didn’t receive a single rep in team drills.

“It’s frustrating, honestly, not getting those reps to the end of the day,” Dobbs said via Steelers.com. “That’s what you do it for. You do it for the opportunity to go out on the field and compete. And you’re not always given the opportunities to fully show your capabilities. You’re not really put in an ideal situation. So you can’t always control those opportunities, you know?”

So it makes sense for Dobbs to explore opportunities. Of course, any team who signs him won’t guarantee him much of anything. He’ll be battling to make the roster as a #3 quarterback. But he has the IQ and athleticism to be an intriguing third-string type of option who consistently impressed in preseason action.

The Steelers currently have three quarterbacks on their roster: Mitch Trubisky, Mason Rudolph, and Dwayne Haskins. A fourth will be added before training camp with the team still possibly pursuing a first-round option in next month’s draft.

Drafted by the Steelers in the fourth round of the 2017 draft, Dobbs appeared in six games for the Steelers, five of those coming in 2018. He’s attempted 17 career passes for 45 yards, no touchdowns, and one interception. Pittsburgh traded him to Jacksonville in 2019 but claimed him back the following year after the Jaguars waived him.