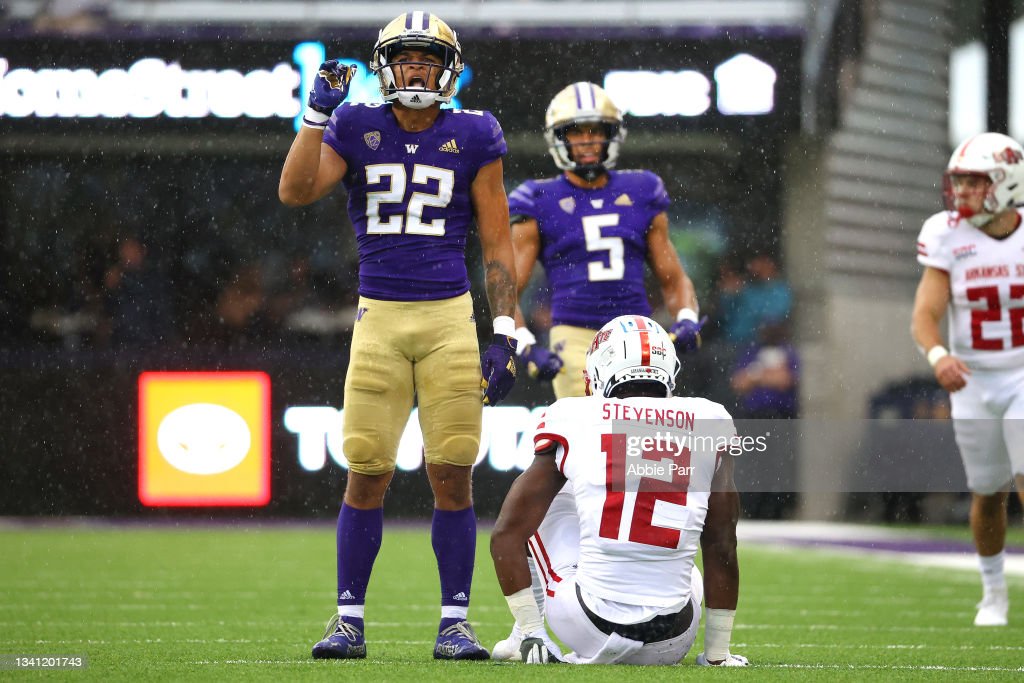 At this point in the pre-draft process, you’re undoubtedly going to read a number of names connected to the Pittsburgh Steelers for one reason or another.

Some guys will be ideal fits for the Steelers throughout the draft, while others, well, not so much.

Fortunately for the Steelers and the fan base, Pro Football Focus took the lead on identifying the prospects that best fit with the Steelers in the top 32 overall in the 2022 NFL Draft.

According to PFF’s Connor McQuiston, two top 32 prospects were identified as best fits for the Steelers, one each on either side of the football.

At No. 8 overall in Pro Football Focus’s player rankings, Washington cornerback Trent McDuffie is the top “best fit” for the Steelers.

Trent McDuffie only allowed 111 yards in coverage in 2021…

“This is another move that is not tremendously likely given the Steelers’ interest in the quarterback market, as they have been linked to Liberty QB Malik Willis and San Francisco 49er Jimmy Garoppolo. On the field, however, the scheme fit is natural given that the Steelers majored in Cover 3, using it on 45.3% of early downs. McDuffie comes from a defense that called Cover 3 on 41.4% of early downs — sixth highest in the Power Five,” McQuiston writes. “While the finer details of the coverage almost certainly differ between the systems, McDuffie excelled in Washington’s version. He was targeted at a fairly middling rate (11.1% of his coverage snaps), but his forced incompletion rate (13.5%) and coverage stop rate (3.13%) place him comfortably in the top third of all FBS defensive backs that have been drafted since 2015. Additionally, his athletic profile positions him well to be Joe Haden‘s heir apparent in the long term and solidify their CB2 spot in the short term.”

A redshirt sophomore, McDuffie (5011, 195 pounds) played three seasons with the Huskies, seeing action in 29 games (26 starts). During his time in Seattle, McDuffie recorded 94 tackles, 4.5 tackles for loss, one sack, just two interceptions, eight passes defensed, three forced fumbles and three fumble recoveries. McDuffie is arguably the most physical cornerback in the class, one that comes downhill with ferocity as a tackler, consistently getting guys on the ground. Though he doesn’t make many plays against the football, McDuffie didn’t allow a single player to gain more than 39 yards receiving in 2021, according to Pro Football Focus, and allowed just two deep receptions on the year.

Trent McDuffie, who I haven't featured since the summer. He must run 40 yards here and makes a TFL. McDuffie is an all day athlete that tackles so well in the open field. pic.twitter.com/Bxoxcpnt7k

The Washington product could certainly plug a hole on the Steelers defense, giving Pittsburgh a top cornerback in the class to try and develop for Teryl Austin’s defense.

Along with McDuffie, Pro Football Focus has North Carolina quarterback Sam Howell as the other “best fit” for the Steelers as PFF has Howell ranked 20th overall in the 2022 draft class.

“Despite frequent comparisons to Baker Mayfield, Howell is best characterized by his mobility and short-throw accuracy. His rushing yards over expected per carry, missed forced tackles per attempt and explosive run rate all rank in the top 10 among the 88 FBS quarterbacks drafted since 2015,” McQuiston writes. “While athletic testing at the combine later this week should show whether he will reach those same heights in the pros, it is safe to assume he will be a viable threat on the ground at the next level. His short accuracy, though likely inflated by North Carolina’s RPO-heavy offense, ranks in the top 25 of the sample, although his accuracy in other parts of the field ranks in the bottom half to quarter of the sample.

“So, how does Howell fit with Pittsburgh? A primary concern of his as a passer is that, much like several other quarterbacks in this class, he played in an extremely RPO-heavy offense that simplified his reads. Some 39.8% of his plays in 2021 came attached with a charted RPO, the third-highest figure in the sample, and that means he will have to adjust to NFL systems. On early downs in 2021, Pittsburgh ran the fifth-most RPOs and subsequently recorded the second-lowest average depth of target. The latter number would likely improve with Howell at the helm, and the Steelers overall would present a strong opportunity for Howell to learn the ropes in a system he is comfortable in.”

Tomorrow we get to see Sam Howell sling it pic.twitter.com/HQuI6IaZP5

Howell, much like Ole Miss QB Matt Corral, feels like an ideal fit at quarterback due to the heavy use of the RPO in offensive coordinator Matt Canada’s system. Add in the rushing ability Howell brings, and he begins to check a lot of the boxes that the Steelers are looking for in their next franchise quarterback.

He’ll undoubtedly get the Baker Mayfield comparison due to size, looks and overall play style, along with the poor 2021 season at the collegiate level, but there’s a really talented quarterback in there who can thrive in the right situation with talent around him like he did in 2020 when he was a Heisman Trophy candidate for the Tar Heels.