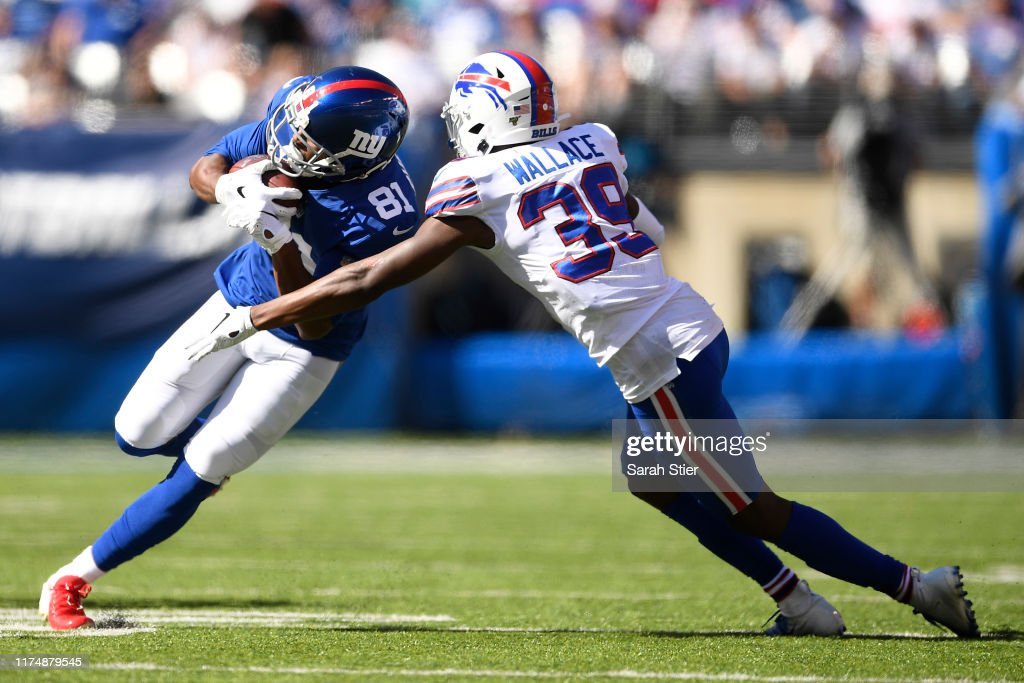 As reported Tuesday afternoon, CB Levi Wallace has agreed to a two-year for $8 million with the Pittsburgh Steelers on the second day of the legal tampering period. While all deals can’t become official until the new league year officially begins at 4PM EST this Wednesday, all signs point to Wallace becoming the newest member of the Pittsburgh Steeler’s secondary. With that, here is a film room breakdown highlighting the strengths and weaknesses Wallace brings to the table as a new member of the Black and Gold.

— Has experience playing both sides of the field in off-man, zone, and in press man coverage
— Smart defender that looks to maintain leverage in zone, being in position to break on passes
— Fairly fluid in his transitions from a backpedal to turn and run with receivers vertically
— Does a good job playing through the hands at the catch point of the receiver
— Can trigger downhill on underneath passes, breaking on the ball to undercut the route for a PBU or INT
— Willing tackler that likes to stick his fan in run support
— Fairly sound wrap up tackler that gets the ballcarrier on the ground
— Understands route concepts and will play through the receiver’s shoulder to contest passes
— Has the ball skills to take the football away, playing the ball in the air like a receiver
— Plenty of starting experience that comes in battle-tested after playing second-fiddle to Tre’Davious White

-— Below-average long speed and acceleration
— May struggle to recover with top-flight athletes down the field if he gets stacked early
— Needs to a better job turning his head around to locate the football
— Often slips in his transition from a backpedal or when trying to lean on receivers in coverage
— Has noticeable balance issues when transferring weight
— Can struggle to quickly change direction in space against nuanced route runners
— Willing tackler, but leaves his feet too often and legs go limp on contact, allowing him to get dragged by stronger runners
— Should do a better job attempting to shed blocks on the perimeter in run support or against screen passes

Before watching the tape, it’s easy to picture Wallace becoming a fan-favorite in Pittsburgh in short order for anyone who reads up on his backstory. He started out not even on the football team in Tuscaloosa, but rather played intramural football at Alabama before walking onto the football team. During this time, his father, Walter, was battling ALS, but encouraged his son to not give up on his football dreams and try and walk-on to the team. His father ended up passing away, but Levi remained dedicated to the sport his father dissuaded him from giving up and dedicated the season to his father’s memory.

Wallace earned a scholarship and started his final season for the Crimson Tide in which he won the 2018 CFP National Championship Game. Despite being a starter for Alabama, Wallace ended up going undrafted in 2018 and signed as a UDFA with the Buffalo Bills. He earned his first start in November of 2018 where he never relinquished the starting role, proceeding to start all 52 games in which he has played the last four seasons, totaling 219 tackles (171 solo), seven TFLs, 30 PBUs, six INTs, and a fumble recovery. Given his backstory and how far he has come up to this point, Wallace is a real easy guy to root for.

Ok, now its times to be objective and break down Wallace’s tape. When it comes to coverage, Wallace is experienced playing on both sides of the field in off-man, press man, as well as in various zone coverage looks. He can play trap or trail technique and doesn’t mind getting hands-on with receivers at the line if asked to do so. He has the length and the transition skills to carry receivers vertically up the sideline like we see on this rep against Chase Claypool last season, forcing the incompletion on an under thrown ball by Ben Roethlisberger.

Here’s another example against Pittsburgh where Wallace carries James Washington vertical up the right sideline, positioning himself to make a play on the football as he snags the pass from Ben while fighting for position with Washington to get the pick.

Wallace isn’t that fastest defensive back out there (4.63 40 coming out of college), but he has decent recovery speed and will play in the receiver’s back pocket, staying in-position to play the ball and contest the pass. Watch this rep against JuJu Smith-Schuster where Wallace follows him across the field on the drag route, staying right behind him and plays through JuJu’s hands as the ball arrives to force the PBU.

Wallace is fairly confident playing on an island and is up for the task of covering the top receivers in the game with no fear. He has a good understanding of route concepts and can break on the route in front of him to knock down the pass like we see on this breakup against the Jaguars.

However, Wallace can struggle transitioning laterally and changing directions against crisp route runners. He also needs to do a better job being able to locate the football in the air at times to make sure that he is in-position to contest the pass. Watch this play against Diontae Johnson where Wallace gives Johnson an outside release to the back corner of the end zone where he gets his hand up but fails to knock the ball down as Johnson comes down with a circus catch for the TD. Wallace isn’t in terrible position here, but still could play with better spatial awareness to force the incompletion.

Wallace also went viral after the game against the Steelers due to what Johnson was doing to him from a route running perspective. He can struggle with balance in his transitions, leading to him slipping when he breaks forward at times just like this rep that was floating across Twitter after the game crediting Johnson’s route running, but in-the-same-breath not doing Wallace any favors.

Another key weakness of Wallace in coverage is his lack of speed and ability to recover against dynamic receivers who can pull away with him in coverage. He will compete his butt off to stay in-position, but like I mentioned earlier, there are physical limitations to his game when facing athletic pass catchers. Here is a good example from last season against the Chiefs where Tyreek Hill gets a step on Wallace on the over route across the field, catching the pass as Wallace slips again in coverage as he tries to trip up Hill who shows off his cheetah speed down the sideline for the long catch-and-run TD.

Wallace plays his best ball when asked to play the ball in front of him, whether it be off-man or zone coverage where he can read the QB’s eyes in the backfield and break on the ball using his football IQ and instincts. Here is a good example against the Titans where Wallace breaks on the football once the pass is thrown, tackling the receiver as the pass arrives and forces the incompletion.

Like mentioned above, Wallace has a knack to click-and-close on the football on underneath passes both in off-man as well as in zone coverage looks. Here’s an example of Wallace breaking on the underneath pass, playing through the receiver’s hands to force the incompletion.

Not only can Wallace force pass breakups in zone coverage, but he also has a knack of jumping the route and picking off the pass as well. Here are a few of Wallace’s interceptions during his career where he baits the QB to throw the pass and jumps the route to get the turnover for the defense.

When it comes to tackling, Wallace is more than willing to stick his face in the fan when it comes to run defense as well as tackling out in space on underneath passes and screens. He has no ill wills throwing his body into the fray to get the stop on defense, having the demeanor you want to see is an NFL cornerback. The signing of Wallace makes sense due to Sean McDermott and Coach Tomlin’s relationship dating back to William and Mary where they played together as both coaches look for similar traits in their defensive backs who are feisty and can tackle. Here is a complication of clips of Wallace showing willingness to make tackles.

It's a coverage world but Steelers still ask their CBs to play the run. Wallace does. #Steelers

He is a sure wrap-up tackler that will brings receivers to the ground, but also leaves his feet and drags the ballcarrier down rather than running his feet on contact to prevent YAC. Here is another example of an open field tackle against Diontae Johnson for off-man coverage where Wallace wraps him up in space, but lets his legs go limp as he drags Johnson to the ground.

Overall, Levi Wallace is a smart corner that stays leveraged in zone and makes tackles. He can play both man and zone coverage and does some of his best work off the ball where he can read, react, and break on the football. While not physically imposing, Wallace is a willing and capable tackler that wants to get involved. Still, he has several physical limitans to his game, including the play strength to fight off blocks on the perimeter, the build to consistently contest bigger receivers, the long speed to run stride-for-stride with burners on the outside, and also the quick twitch to adjust to nuanced route runners when in man coverage at the top of the route.

When watching Wallace play, you see a similar player to what Pittsburgh has brought into their secondary recently including the names of Joe Haden, Cam Sutton, and previously Steven Nelson as guys that aren’t supreme athletes, but are competitive at the catch point, instinctive in coverage, and feisty in the run game. Those are the qualities Tomlin has often looked for in his corners over the years, and Wallace appears to be the next man up from that perspective. He probably is best suited to be a #2 CB on the outside opposite a true #1 guy who can matchup with the more physically imposing receivers you will see in the league.

Still, Levi Wallace is up for the challenge and plays like an underdog like he has been his entire life. He’s an easy guy to root for, and for the money he signed, he’s likely a suitable replacement for Joe Haden who will be able to provide comparable play to what Haden provided last season for Pittsburgh.

What are your thoughts of the Levi Wallace signing? Do you see him making an impact in the Steelers secondary? Please leave your thoughts in the comments section below and thanks again for reading!