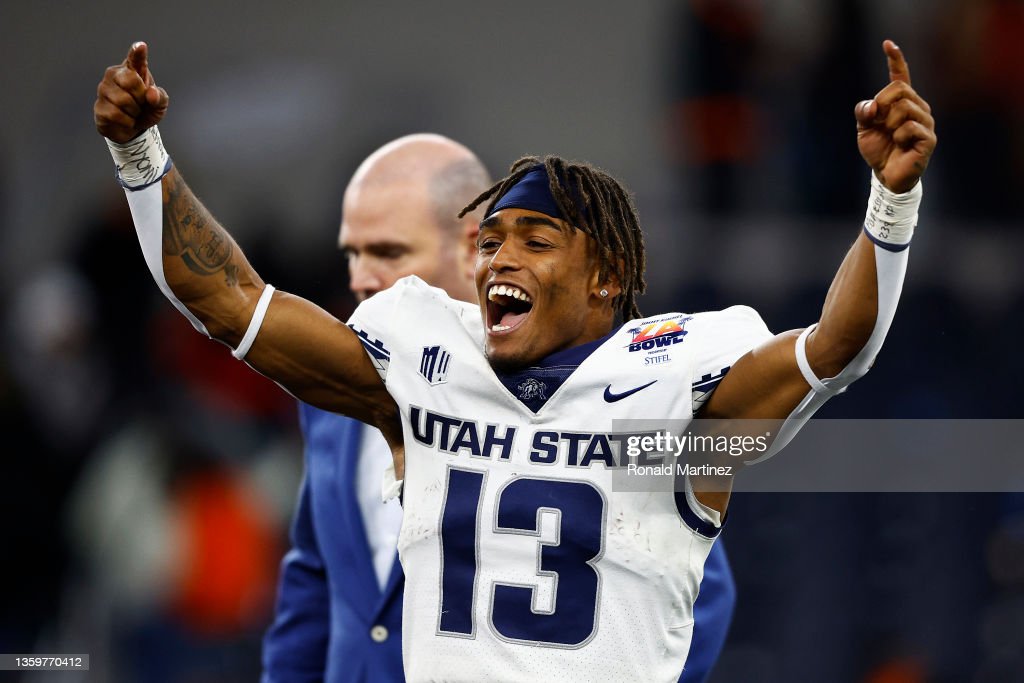 New to Steelers Depot, we will be highlighting a few less-heralded prospects at each position group in lead up to the 2022 NFL Draft that likely won’t go until Day Three, but present potential value as sleepers in the later rounds. This week we will be listing highlighting several wide receivers from a loaded class that has many good options to choose from, causing some good talent to be pushed down the board.

Reggie Roberson Jr. was on his way to a stellar 2020 campaign, averaging nearly 100 yards a game before suffering an ACL injury that ended his season. The injury bug is nothing new for Roberson as he has suffered back-to-back season ending injuries in 2019 and 2020. He managed to come back in 2021 and post respectable numbers in a full season of action, but questions remain as to whether he will be the same caliber of play he was pre-injury as a dynamic, big-play threat in SMU’s Air Raid offense.

SMU WR Reggie Roberson, Jr. was on his way up draft boards before suffering another season-ending injury vs Memphis (5-243, 2 TD in 3 qtrs). His elusiveness after the catch is evident here; he dusted his man off the LOS on his previous score (70 yds). #SnapScout21 pic.twitter.com/coyPe1sadc

A track star in high school, Roberson displays the speed to take any reception to the house at any given time, whether it be a go route up the sideline or a simple screen pass where he accelerates after the catch. The injury history will scare some teams off in the pre-draft process, along with the fact he’s never topped 800 receiving yards in a single season. Still, should Roberson display some of that juice he showed during his time at SMU, he could prove to be a great value selection late that can stretch the field and make big plays in the passing game.

Nice release here from Roberson. Gets inside quick in the CB and gets him to commit inside and when he does Roberson hits the jets and gets outside, leaving the CB in the dust. CB actually does a decent job of staying square too.
Tracks the ball nicely to catch it in stride. #TD pic.twitter.com/yRwJhSwfCk

Wan’Dale Robinson transferred from Nebraska to Kentucky this season in hopes of being featured more on offense, and the move proved to pay dividends for the former Cornhusker in a big way. Robinson’s first season in the SEC was capped off with 104 receptions, 1,334 receiving yards, and seven TDs which also included another 111 yards on the ground and 11 kick returns for 236 yards on special teams. Robinson dominated with the ball in space, showing off his ability to pick up YAC play-after-play against some of the best defenses in the nation.

Despite the junior’s great 2021 campaign, he hasn’t been garnering the same amount of hype and recognition in draft circles as some of the other early declares, making one wonder if he’ll slip out of Day Two and into Day Three. For a team looking for a prototypical slot WR that can play in different spots in the formation where you get the ball quickly to him in space and watch him work, Robinson would be a fantastic fit. Teams like the 49ers and how they utilize Deebo Samuel may look at Robinson as having a similar skill set, treating him like a Swiss Army Knife weapon where you scheme him up touches and watch him make defenders miss.

Wan'Dale Robinson forced 22 missed tackles after the catch in 2021…

Most in a season by an SEC WR since 2019 😳pic.twitter.com/EhelQVOaOK

One WR prospect I had no idea about before Josh Carney, Owen Straley, and Melanie Friedlander put him on my radar was Tulsa’s Josh Johnson. Reports from the Shrine Bowl kept coming out that Johnson was routinely beating coverage in one-on-ones and in team sessions, showing off his quick movement skills off the LOS and ability to separate from coverage in an eerily similar way that former Steeler Antonio Brown did. While this by no means suggest that Johnson is near the same caliber of player as Brown, many other draft analysts came out of Las Vegas with the same comp in play style, acknowledging the #84 jersey didn’t hurt the comparisons either.

The former Iowa State transfer enjoyed a breakout season in 2021, going over the 1,000-yard mark and secured six scores before declaring for the NFL Draft. While the measurements won’t wow you (5’10, 176lb), the ability to generate separation and control his body in difficult catch situations should speak to Johnson’s ability to contribute at the next level like that of current Steelers WR Diontae Johnson. He will have to get physically stronger to be able to fight off press man looks and be able to hold up when working the middle of the field, but Johnson seems like one of those names flying under the radar that may resurface in the league sooner rather than later.

Tulsa WR, Josh Johnson is quicker than fast. He does a great job of manipulating space and has good hands. pic.twitter.com/sysaoCywsI

Another receiver that made waves for his performance during Shrine Bowl week was Miami’s Charleston Rambo. The redshirt junior and Oklahoma transfer was written off during his time with the Sooners as an inconsistent receiver that struggles with drops and his ability to consistently separate against coverage. After seeing his role decrease in Norman, he decided to take his talents to South Beach and reinvent himself and his work ethic to become a more well-rounded receiver. The result made Rambo the single-season all-time leader in Hurricane history in receptions and receiving yards in his lone season with the program.

The 6’0 5/8”, 180lb receiver showcased his ability to win down the field as well as a possession receiver near the LOS, having improved his ability to consistently catch the football as well as create separation against defenders at the top of his routes. His work ethic and desire to continue improving has been well-documented in the interviews conducted with him, and the improved skill set with more tools in the toolbox along with his athletic traits suggest that he’s not done improving and could be a sneaky sleeper at receiver in the middle rounds of the 2022 NFL Draft.

Now, I couldn’t in my good conscience write up a “WR Sleepers” article without including Dave Bryan’s love child: Utah State WR Deven Thompkins. I may have been left looking for a new job had I done such a thing (Dave’s a great boss, by-the-way), but in all seriousness, Thompkins is a guy that isn’t getting the recognitions he truly deserves. Most of that will be due to his listed 5’8, 155lb frame, but when you plug in the tape on this kid, you see a dynamic, explosive, high-flying receiver that doesn’t care if you are 6’4 because of his ability to elevate into the air and win jump balls despite his small stature.

He finished second in the FBS in receiving yards on the year (1,704), proving he could get the job done even when he was the focal point of the offense that opposing defenses circled as a guy they had to stop.

Thompkins’s athleticism not only comes out in his explosive jumping ability but also when running past defenders with ease tasked with covering him in man coverage. He will get on top of coverage in a hurry and stack defensive backs with relative ease if they can’t get a hand on him, having multiple long bomb TDs throughout his college career. He also has experience returning kicks and punts, being a threat to house it on special teams as well. His size may take him off some teams’ draft boards, but I see a playmaker at WR like that of Taylor “Turbo” Gabriel who also dominated at a smaller school before making an impact in the league.

Phew #UtahState WR Deven Thompkins is a PROBLEM. Stacks his man and runs right by him for the touchdown.