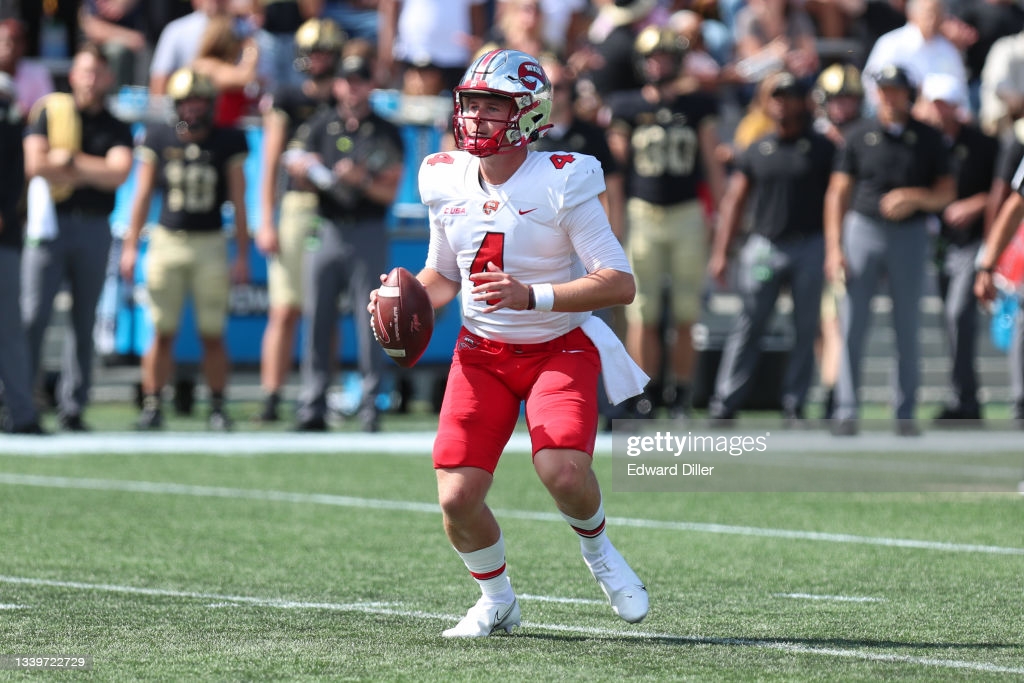 New to Steelers Depot, we will be highlighting a few less-heralded prospects at each position group in lead up to the 2022 NFL Draft that likely won’t go until Day 3, but present potential value as sleepers in the later rounds.

Kaleb Eleby may not carry the same hype that the other top QB prospects do in this draft class, but his play on the gridiron should warrant more recognition. The 6’1″, 210 lb. redshirt sophomore enjoyed a strong 2021 campaign by completing 230-of-362 pass attempts (63.5%) for 3,277 yards and 23 TDs with six INTs while contributing another six scores on the ground. Eleby is a talented passer, having the arm talent to attack defenses down the field as well as the touch and ball placement to drop passes in the bucket to his receivers who win vertically or in tight window throws.

He was the man at the helm of the Broncos passing attack that enabled current Seattle Seahawk Dee Eskridge as well as current draft prospect Skyy Moore to big seasons the last couple of seasons, speaking to Eleby’s ability to utilize receiving talent as a passer. He has moments of brilliance, albeit against smaller-school competition in the MAC, but will have the opportunity to show that he belongs with the big names in this class at the NFL Combine later this March.

Thanks to the amazing coverage provided by Josh Carney, Owen Straley, and Dr. Melanie Friedlander out at the Shrine Bowl, I managed to get more insight on Brown University’s E.J. Perry. The 6’1 1/2”, 212 lb. QB doesn’t have phenomenal size or a howitzer for an arm, but he has played well in the Ivy League the last few seasons, completing 295-of-444 pass attempts for 3,033 yards and 23 TDs with 14 INTs. Perry also produced respectable numbers with his legs this season, logging 111 carries for 402 yards and seven scores while also chipping in a solo reception for 64 yards and a score. Perry may not be an elite athlete, but he is mobile enough to work off-script and complete passes on the run.

From my understanding, Perry represented himself well in Las Vegas as a guy that likely won’t ever be a starting-caliber QB in the league, but has the traits, character, and intangibles to carve out a role as a quality backup option that can come in and manage the game if called upon, potentially working his way to a spot-starter role should the situation require it. Keep an eye on Perry as a potential Day 3 selection that a team takes to back up a veteran or provide depth behind a younger QB as a lower ceiling, steady floor player.

It may be difficult to call Baily Zappe a sleeper considering that he broke Joe Burrow’s FBS single season passing TD record this season (62) as well as set the FBS record for most passing yards in a season (5,967). However, being in Mobile for the Senior Bowl, the vibe for much of the week was all the other highly touted QBs in this draft class…. and then Baily Zappe as “that other guy that’s here”. Understandably, Zappe doesn’t exactly jump off the screen from a physical standpoint standing 6’0 3/8”, 213 lbs. Still, Zappe took one year transferring from Houston Baptist this season and managed to turn it into the greatest single-season passing performance in FBS history from a statistical standpoint.

Overall, it was an up-and-down performance for Zappe down in Mobile on the week, as he showed that he lacks the overall arm strength and physical tools to be considered a franchise signal caller at the next level. However, his decision making and ball placement on some of his throws were impressive at times during practices, suggesting he could be in play in a similar vein like Perry as a Day 3 option that likely doesn’t provide high upside, but could be that backup passer at the next level who could potentially work himself into a similar role like Gardner Minshew or Taylor Heinicke as a guy that can be a quality backup and potentially start for an offense for a stretch if needed.