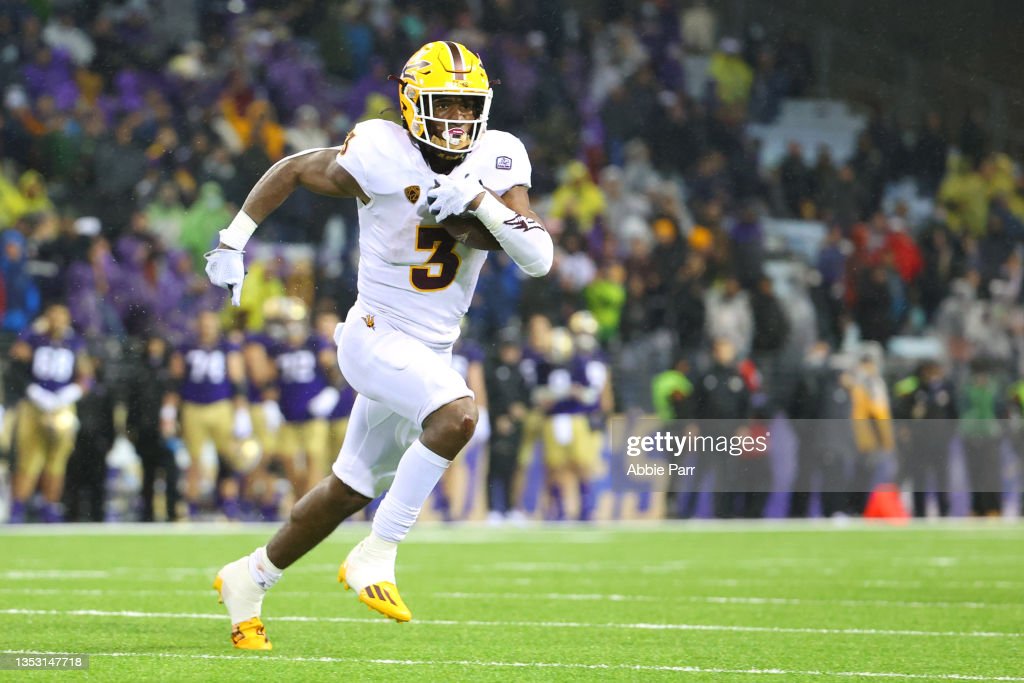 New to Steelers Depot, we will be highlighting a few less-heralded prospects at each position group in lead up to the 2022 NFL Draft that likely won’t go until Day Three, but present potential value as sleepers in the later rounds.

I had the distinct opportunity to work with Pierce during his freshman year in 2018 when I was a member of the Gators Football Strength and Conditioning Department. Pierce was one of the freakier athletes on the team from a physical standpoint, having the strength to back squat over 600lb for reps with ease just out of high school. That physicality comes out when watching him on tape too, running hard behind his pads with a battering ram type of running style where he looks to be the hammer rather than the nail on contact.

Dameon Pierce gave it his all, but the TD didn't count and he was given a personal foul for continuing to participate without a helmet. pic.twitter.com/Pa6raRw4ht

Pierce always worked in a committee role at Florida in Dan Mullen’s offensive system, but when he got his chances on the field, he displays a feature back skill set. He can run inside and outside, run through defenders as well as make decisive cuts in space, was a key contributor running down kicks and punts on special teams, is a sound pass protector, and has sneaky skills as a pass catcher out of the backfield. Pierce put his full skill set on display in Mobile a couple weeks ago, showing scouts that he can likely be a better pro player than his college projection would suggest.

While Pierce may have gotten the attention he deserved down at the Senior Bowl due to his well-rounded performance, I still believe that he will be a back selected somewhere on Day Three of the 2022 NFL Draft due to the overall depth and perceived value of the position. While Pittsburgh may not have the biggest need in the backfield to warrant spending draft capital on an RB, Pierce has that well-rounded skill set as a runner, receiver, special teams contributor, and pass blocker to make himself available many different ways to a team while also having great football character that would be a positive influence to any locker room he gets drafted by.

Dameon Pierce on this inside zone
◾ID's the hard Edge by 44 and 16 coming to run fit any spill outside
◾ Cuts upfield off his G/C Duo block
◾That's how you finish a run#NFLDraft #NFLDraft2022 pic.twitter.com/9uXcO8BfIJ

While Pierce may have been the RB turning heads at the Senior Bowl, it was UNC’s Ty Chandler doing the same in Las Vegas at the Shrine Bowl. Fellow Steelers Depot contributor Josh Carney messaged me throughout the week, lauding Chandler’s running style and his prowess as a receiver, suggesting he would be the perfect complement to a feature back like Najee Harris. I would tend to agree with Josh, having watch Chandler since his early college days at Tennessee before he transferred to Chapel Hill. Chandler enjoyed his best season on the ground this year, showing off great vision as a runner but really shined as a pass catcher, displaying the skill set to be a quality third down back in the league.

Chandler’s age and injury history will likely suppress his value as a Day Three selection that should still be able to make an immediate contribution in the league as a special teamer and backup that can come in on passing downs to start his NFL career while earning more work on the ground depending on the backfield situation ahead of him. He has shown the skill set to shoulder the load if necessary, but Chandler should expect to provide great value to a backfield wherever he goes selected.

Allgeier initially came to BYU as linebacker that later moved to the offensive side of the football which ended up being the best decision he and the team could’ve made. The 5’11, 220lb redshirt sophomore enjoyed a breakout campaign in 2020 with Zach Wilson at the helm, but had his best season in 2021, rushing for over 1,600 yards and 23 TDs while throwing in 28 receptions as well on the season. Allgeier is a big, powerful runner that has deceptive burst and acceleration in when hitting the hole or when he sees daylight, having the ability to pull away from defenders for big runs.

Tyler Allgeier feels like the biggest sleeper in the 2022 NFL Draft. pic.twitter.com/xJVkCHU7QN

Many in the draft community have compared Allgeier’s playing style and similar frame to that of Nick Chubb of the Cleveland Browns. While Allgeier could be considered a poor-man’s version of Chubb, another comparison could be former Steelers RB James Conner who too was projected to be mainly a power back coming out of Pitt, but had the skill set to catch passes and be a viable pass protector. Allgeier has more juice than Conner did coming out and brings more elusiveness as a runner while still being a battering ram in-between the tackles. If Allgeier goes somewhere on Day Three of the draft, consider it a great value pick for whoever selects him.

Tyler Allgeier not talked about enough in this class. To me he’s Zack Moss (or at least what we thought Moss was) w/ 4.4 speed. pic.twitter.com/A8P462e74V

If a team is looking for another pass-catching back on Day Three of the 2022 NFL Draft, one name to have on yor radar is ASU’s Rachaad White. In his last season on campus, White caught 43 passes for 456 yards and had 21.8% receiving yard market share of the offense which ranks 6th among all P5 RB seasons since 2015. Add in the fact that he went over 1,000 yards on the ground with 16 total scores in a 6’2, 210lb frame, you have a player that brings a three-down skill set with feature back size to the table as a draft prospect.

I love Rachaad White the more I watch of him, climbing the 2022 Eligible RB Ranks 🔥🔥 pic.twitter.com/ONnb6xwM04

He was another back that flashed at times in Mobile during Senior Bowl practices and played well in the exhibition game. Still, with the sheer number of draftable backs in this draft class, I would expect White’s draft stock to fall somewhere in the early-to-middle rounds of Day Three in the draft, presenting great value in a player that appears to have similar traits and measurables to that of Kenyan Drake coming out of Alabama several years ago. Should White find himself in a situation to earn a role on offense early on in his career, we could see him flourish on the NFL stage.

Was really excited to see Rachaad White get a senior bowl invitation. Talked w @DonnieDruin about him the other day.

Can do a little bit of everything for you, tough runner with plus vision. Get this dude out in space and he can make plays in the passing game as a receiver. pic.twitter.com/3L1mKWld5Z