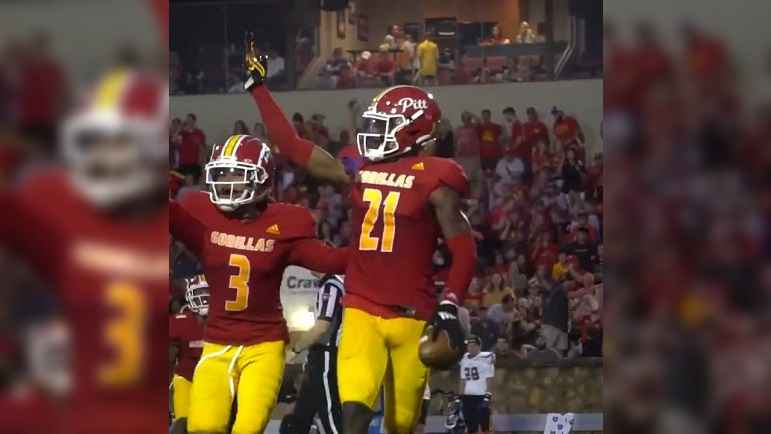 It was a long road to the East-West Shrine Bowl in Las Vegas for the Chicago native, Dallis Flowers, who turned eyes this practice week with his length, physicality, and ability to be disruptive in press coverage. Born on June 4, 1997, the 6’1” 195-pound cornerback struggled to find a home at the collegiate level after a standout high school career, where he was named an All-Conference and All-Area performer at Oak Park-River Forest High School.

After brief stops at Robert Morris and Tiffin University, Flowers found his home at NAIA Grand View University, where he was a two-time NAIA All-American, both as a cornerback and kick returner, helping his team secure a pair of conference titles. During his 2019 campaign at Grand View, he finished with 33 tackles and five interceptions on defense, while also averaging an eye popping 38.1 yards per return on kickoffs and a healthy 11.1 yards per return on punts, helping him compile 731 all-purpose yards. Flowers was also notably a guard of the basketball team at Grand View, where his ability to guard on the perimeter helped him hone his skills in press coverage.

After standing out at the NAIA level, Flowers transferred up the Division II level this fall, where he competed at Pittsburg State University in Kansas. Flowers was a standout performer for the Gorrillas, leading the team in both interceptions, with four, and pass breakups with six, while also compiling 21 tackles and 1.5 tackles for a loss. Moreover, he had 573 kick return yards on just 17 attempts, breaking current NFL receiver John Brown’s school record with 33.7 yards per attempt. He also took two kicks back to the house for touchdowns, his longest being a 98-yard return.

Fast forward to Shrine Bowl practices, and it was evident from the first team session that Flowers had a great understanding of how to use his length in press coverage and possessed the speed to carry receivers vertically with ease. As the practice week continued and the teams opened their playbooks a bit more, Flowers showed some scheme versatility, appearing natural in his ability to re-route, sink, occupy windows, drive the flats, and lay some physical hits as a flat defender in Tampa 2.

Although he missed Tuesday’s walk-through practice with a calf injury, one which will likely hold him out of Thursday night’s game, I walked away from the week firmly believing that Flowers, along with South Carolina State’s Decobie Durant and Baylor’s Kalon Barnes, was one of the premier cornerback prospects at the event. Ultimately, his pro day testing numbers will provide us with a better foundation of where he’ll end up hearing his name called this spring. Regardless, I would strongly contend that Flowers has the ability to thrive both in a single high scheme or a two high scheme with continued refinement of his technique at the next level. Moreover, his ability to contribute as a kick returner could get him on the field immediately as he gets familiar with the complexities of an NFL defensive playbook.

Below, I have a full audio transcription of my conversation with Dallis, which took place after Day 1 of Shrine Bowl practice on Saturday afternoon.

Owen: All right, Dallis, I think the first time we saw you today, you were feeling some punts and right away, me and Josh were like this guy’s definitely got some background there. I had seen some great returns from your tape that I was able to find. So just talk a little bit about your work in the return game.

Owen: Kind of going off of special teams, do you have any special teams experience, beyond just kick and punt returns, that you’re comfortable with.

Dallis: Early in my college career, I would play on the kickoff unit and as a gunner. So, I could definitely do that at the next level.

Owen: Coming from the Division II level and then jumping to collegiate All-Star game level competition, have you noticed a little bit of a change in speed and other facets of the game today?

Owen: I noticed you playing a lot of press coverage today in the 1v1s , which, you know, makes sense. You’re a lengthy guy, you can kind of dictate where receivers are going off the line. So where would you say your comfort level is at in press coverage versus off coverage right now?

Owen: Even just within press, you know, do you feel like you got a lot in the toolbox?

Owen: You know, being a longer guy, oftentimes that can help out in zone coverage too. Whether that’s Cover 2, playing in the flats, you can be tough to throw over and then especially Cover 3, you can use your size to squeeze receivers into the sideline. So, what would you say were the main zones you were playing at Pittsburg State?

Dallis: I played a little bit of Cover 2, Cover 3, and Cover 4 Quarters.

Owen: Okay. Going off that, what is your favorite zone assignment as a corner.

Dallis: Zone? I would say it depends, like if I’m trying to get a big hit Cover 2. If I’m looking to rob something, I’d say Cover 3.

Owen: A guy of your size is certainly a good scheme fit in Cover 3, it allows you to range from the sidelines back to the hashes. Going off that, in team and 7v7 sessions today it seemed like defensively, you guys were almost exclusively running Cover 3 and Cover 1 today. \ Was that pretty much it?

Owen: Were there a couple of the receivers today that stood out as being particularly hard to guard in the 1v1 or 7v7 sessions.

Owen: Yeah. He was turning a lot of heads. You’re the second defensive back I’ve talked to that said that. So yeah, the kid’s definitely, he’s got some shift to his game, a smooth route runner for sure.

Dallis: All of the receivers are pretty good. I’d probably say he stood out the most.

Owen: Going off his game, when guys hit you with that slow developing,  diamond type release on slants, what’s your technique there? Because it can be really hard to guard.

Dallis: Yeah, really. Half the game at corner is guessing. You have to just guess correctly. So, I mean, I would probably inch out, slow pedal, and use my length, use my body.

Owen: Absolutely. Coming to an event like this, what are your goals as the week continues?

Dallis: I’ll say, first and foremost, for me to get better every single day, go 100% on the field, and make sure like the teams, scouts and coaches remember my name.

Rep 1 going against Toure Samori, Nebraska. Locates the football in flight and contests it at the catch point pic.twitter.com/zWb1POgpx3

Owen: Do you have a lot of familiarity with what the Steelers are running on defense, and are there any specific defensive backs on the team that you watch.

Dallis: Minkah Fitzpatrick and Joe Haden. I also have a guy who I grew up with on the Steelers, Robert Spillane.

Owen: Oh, interesting. One thing about Rob, he is certainly not afraid to hit. Beyond that, any other corners around the league that you look to model your game after?

Owen: Those are some great names right there. I mean, that’s pretty all I, after you Dallas, uh, you know, appreciate you taking the time and good luck later this week. I’ll be watching.

Dallis: Thank you. I appreciate you.

In a league where receivers seem to grow larger in frame every year, size and length are always going to be coveted traits at the cornerback position. Antonio Cromartie, who Flowers listed as being a player he studies tape on, stood just one inch taller and 15 pounds heavier than the Pittsburg State products current frame. As Flowers gets into an NFL strength program, he certainly has room to gain strength and fill out his frame further, which will only improve his already intriguing ability as a press coverage cornerback.

Particularly with his work at the line of scrimmage, I see a little bit of Cromartie in Flowers’ game, with the ability to both aggressively use his length in press coverage to disrupt receivers or play with inch technique and create contact to cut them off at the top of their routes. Wherever he lands this spring, a team will be getting a lengthy, physical press corner with good ball skills and an ability to make a difference in the return game. Be on the lookout for his stock to rise as we get closer to the draft!