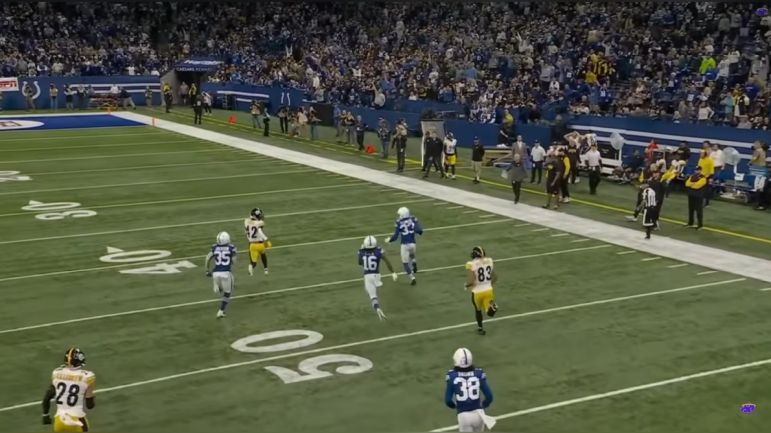 Though the Pittsburgh Steelers secured victory in Monday night’s win over the Indianapolis Colts, their poor kick return coverage turned it into a nail-biting win. On five returns, Indy averaged 45 yards and had an 89-yard runback that changed the course of the game.

Today, we’ll go through the Colts’ three longest returns and try to figure out what the heck happened. Starting with the first.

1. Right return by the Colts. So the Steelers’ right side (left side from the Colts’ perspective) is free from the backside, just like an OLB chasing a running play called away from him. The Colts block it up well on the front side, FB Derek Watt being double-teamed, but Marcus Allen defeats his block to force the kick returner to bend back to his left and away from his blocks.

That leaves Tre Norwood free to close and squeeze this one for what would be a return to roughly just the 25-yard line. But he’s perhaps a step slow and makes the poor choice of trying to light up the return man with a shoulder tackle, not bringing his arms or looking to wrap up.

Norwood’s physicality has improved but it’s still not a strength. So his tackle attempt is weak and ineffective and the return man bounces off. Now, he has a lane and picks up another 10 yards before finally being tackled, taken down WWE-style by RB Benny Snell and others.

It’s not the worst return but the Steelers left a solid ten yards left on the field from Norwood’s poor decision and technique.

2. Next one. Steelers trying a coverage wrinkle here with L4 and L5 and R4 and R5 (the four most middle defenders sans kicker Matthew Wright) switching lanes and responsibilities at the start of the runback. But the return man does a nice job to cut this one back and go against the grain and flow of the coverage unit. OLB Jamir Jones, initially R5 – which is where the injured WR Miles Boykin had been aligning – has the best chance to make the tackle but loses contain and the returner bounces outside of him.

From there, the Steelers have a tough time getting off blocks, especially Snell, as the return man cuts between him and S Tre Norwood. Both dive and miss the tackle and it takes Wright and CB Arthur Maulet to make the tackle at the 40. A 45-yard return.

3. But the worst was Dallis Flowers’ 89-yard runback to open up the second half and really get the Colts back in the game. Like a coverage bust, I’m frankly not 100% sure what went wrong here other than to say this is definitely not how they drew it up.

My guess is there’s a miscommunication on another stunt. Watch L5 Miles Killebrew, to the right of kicker Matthew Wright (from the Colts’ perspective) dart inside of his block as Flowers catches the kick. It ends up putting two players in the same gap, Killebrew and R5 Arthur Maulet (again, this is where Boykin often aligns). Like defending the run, you don’t want two players responsible for the same gap because it leaves another open. If you draw a line down each gap, there shouldn’t be two players who touch it. Here, there are. 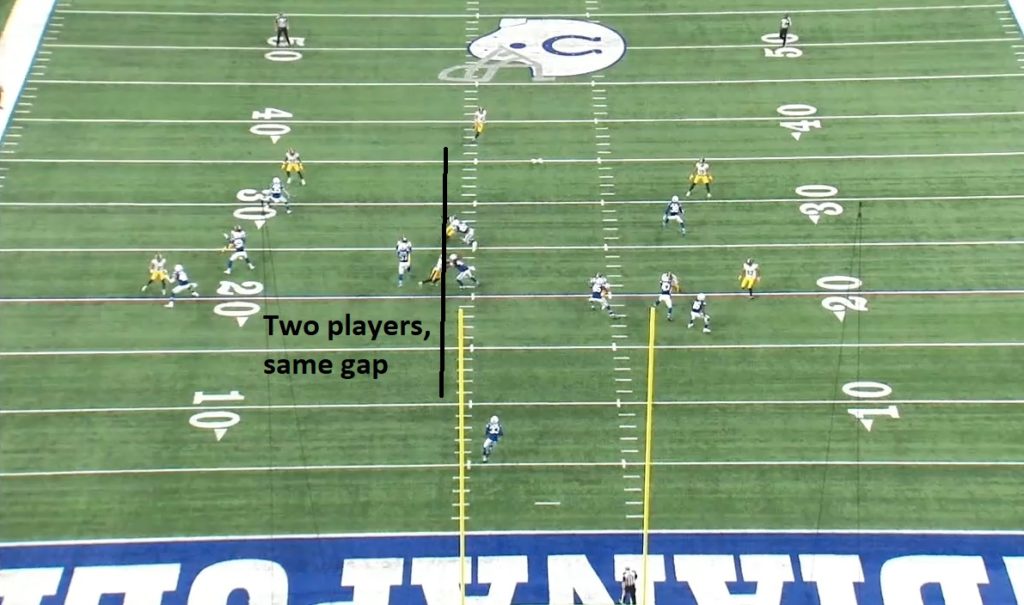 My guess is Maulet should have switched and attacked the inside half of his blocker to replace Killebrew’s gap to maintain good integrity. It’s either that or Killebrew just had a mental error/made an aggressive decision. It resulted in six coverage players to one side, four to the other, and Flowers ran to where he had numbers.

At least James Pierre, one of the safety/contain guys, helped slow Flowers up while rookie Connor Heyward hustled hard to make a shoestring tackle to prevent this from being a touchdown, though the Colts still found the end zone on their drive.

Overall, the Steelers struggled to get off blocks, struggled to tackle, and potentially had miscommunication/mental errors that resulted in poor gap control. Some of this was exactly where Boykin would’ve been and it’s obvious his injury has hurt this team, though the team even had issues in Week 10 with him healthy. There’s potential to say something about kicker Matthew Wright too. He’s probably not the kickoff specialist Chris Boswell is though he’s booting these into the end zone, the 89-yarder was 7-8 yards deep, though I’d wonder what the hangtimes are. That’s data I’ve yet to track.

All issues that’ll need to be corrected before Sunday’s game against the Atlanta Falcons and Cordarrelle Patterson, the NFL-record holder for career kick return touchdowns, notching his 9th earlier this season. Boykin is expected to return but Danny Smith and the rest of this unit better be playing their best football.