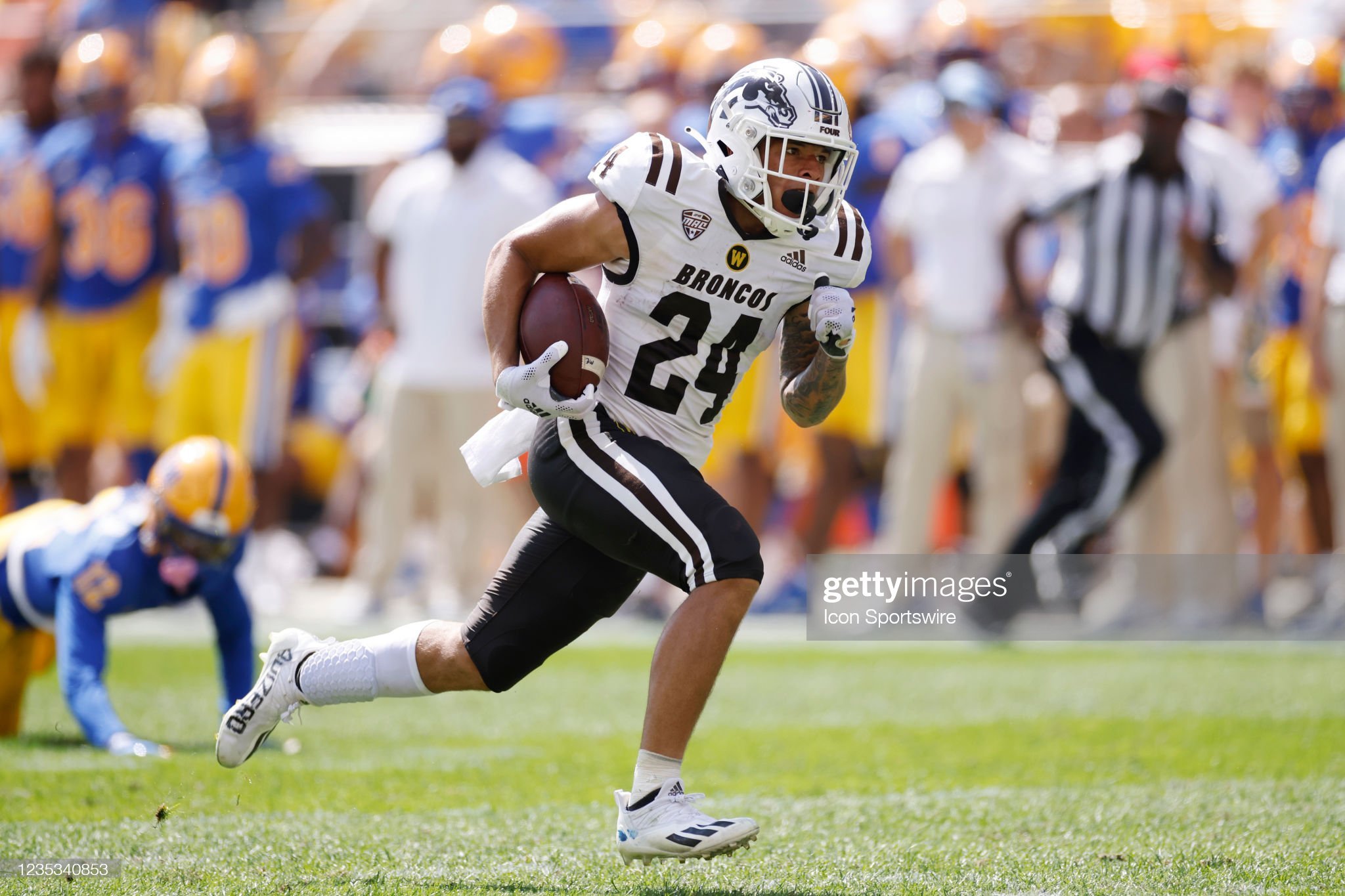 If you’re sick of mock draft season, boy do I have the answer for you. More mock drafts!

Today, I’ll give you my first mock draft two weeks ahead of free agency in an attempt to predict what I think the Steelers will do, not what I would do.

An important caveat: this is a rough first mock draft, considering plenty of changes are coming to the Steelers in the coming weeks in free agency. I did my best to try and look ahead and project some holes on the roster while attempting to plug as many through the draft as possible.

Things will change between now and my final mock draft in late April. Enjoy the ride.

And as always, let me know what you think of my first mock draft in the comments section below!

Analysis: Much like Alex Kozora did with his first mock draft of the season, I am not mocking a quarterback to the Steelers – at all — in the 2022 NFL Draft right now. Sitting at 20 is a tough spot, and I’m just not in love with this class overall enough to move up for a quarterback. So, I’ll use this exercise to build up around the quarterback position, which I think the Steelers add to in free agency.

Assuming the Steelers sign a veteran quarterback or two in free agency to come in and compete with Mason Rudolph and Dwayne Haskins, the Steelers have to address the biggest need on the roster: the offensive line. That leads us to Boston College’s Zion Johnson, who had a dominant week at the Senior Bowl, has good tape overall in his last few years with the Boston College Eagles, and even grew up a Pittsburgh Steelers’ fan.

Johnson can play center or guard, though I prefer him at guard in this scenario. He is a Day 1 starter at guard in the NFL, and is as consistent as they come in this draft class of interior offensive linemen.

Here’s how Alex Kozora described Johnson in our player profile:

“Overall, Johnson is a plus run blocker who should do well in a man-blocking scheme. But he has enough athleticism to play in zone schemes too. His pass protection isn’t ideal but it’s fixable with improvements to his technique. Important to remember the guy got a late start to his football career and his best is ahead of him. My comparison ranges between Laken Tomlinson and Trai Turner (more of the Pro Bowl type of Trai Turner as opposed to the Steelers’ 2021 version). A very good prospect the Steelers need to consider.”

Johnson offers a ton of versatility along the offensive line, having started games at tackle and guard in college, and got a ton of work in at center in Mobile. Adding Johnson to the interior offensive line at left guard would allow Kevin Dotson to shift back over to right guard, his more natural position, shoring up both positions.

The Steelers have to invest heavily along the offensive line once again. Johnson gives them a good building block in the trenches early.

After watching the Steelers’ inside linebackers struggle to do much of anything right in 2021, Pittsburgh has to address the position early in the 2022 NFL Draft, and maybe even through free agency, too.

Enter Cincinnati’s Darrian Beavers, a true planet theory guy at off-ball linebacker that would be able to step in right away and start next to Devin Bush in 2022. A former safety, Beavers brings good athleticism and size to the position that fits today’s game, allowing him to slip blocks and fly downhill against the run, while being able to drop in pass coverage and handle himself quite well, allowing him to serve as a three-down linebacker.

Here’s what Jonathan Heitritter had to say in our draft profile of Beavers.

“Darrian Beavers has made the transition from a skinny skill guy in high school to packing on nearly a hundred pounds to play as an edge rusher before finding a home at off-ball linebacker. Beavers has his physical limitations at linebacker concerning his ability to quickly change directions and run with backs and tight ends down the field, but he is a physical throwback type of player at linebacker that also brings the ability to rush the passer to the table. Beavers also is a capable zone coverage defender, having the quick trigger downhill we see when he plays the run to impact passing lanes with his size and long reach.”

Adding that type of player in the BUCK role next to Bush should be able to elevate the inside linebacker room to a respectable level once again, giving the Steelers a real chess piece in the middle of the defense for years to come.

This pick right here, wide receiver Skyy Moore out of Western Michigan, is my personal favorite out of this mock draft.

A Pittsburgh native, Moore was teammates and close friends with Dino Tomlin at Shady Side Academy, so Steelers’ head coach Mike Tomlin should know all there is to know about the young receiver off the field.

At Western Michigan, Moore showed the ability to play in the slot or on the boundary, and has true home run speed, which should have the Steelers very interested in him overall. He’s a twitched-up athlete that should test very well, but could be pushed down the board a bit due to the depth of the wide receiver class in the 2022 NFL Draft.

Here’s what Jonathan Heitritter had to say about Moore in our draft profile.

“I honestly think Moore deserves consideration at the Round 2-3 turn. He is extremely dynamic both before and after the catch, being a nightmare for CBs to cover as he attacks their toes and creates separation so easily over the middle. He may not be a “contested catch guy”, but Moore wins his fair share of catches when a defender is on him whether that be in tight coverage or going up and getting the ball in the air. His speed/quickness combination make him a legit weapon both in the slot as well as on the outside being so difficult for defenders to jam at the LOS.”

Needing help in a big way at receiver, the Steelers could unearth another pass-catching gem from the MAC on Day 2 in Moore, bringing him home to the Steel City.

I’m not thrilled with waiting until the fourth-round compensatory pick to add a tackle to this class so far, but that’s just how the board worked out for me, landing Louisiana’s Max Mitchell here.

Mitchell played left and right tackle for the Ragin’ Cajuns throughout his career and was a stout pass blocker who is a bit underrated as a run blocker. He brings sound technique to the position and is very patient overall in his pass sets, rarely making mistakes and rarely ending up on the ground. He’s a bit on the smaller size for the position and could wind up at guard early in his career if tackle doesn’t work out, but this guy’s tape is as sound as they come at the position.

Mitchell moves very well overall for the position, but he just needs to get stronger, especially in his upper body, to really stick at tackle in the NFL. He brings a ton of starting experience to the table though, and would be well worth the value in the fourth round.

The Steelers desperately need to add a backup behind standout running back Najee Harris. Insert North Carolina’s Ty Chandler here. I saw Chandler in person at the East-West Shrine Bowl in Las Vegas earlier this year, and he was easily one of the top backs there.

This is a little later than I wanted to address cornerback, though I do believe the Steelers re-sign one of Ahkello Witherspoon and Joe Haden (along with Terrell Edmunds at safety) pushing the defensive back need down the board just a bit.

Enter Waller, who led the ACC in interceptions in 2021 and performed well at the East-West Shrine Bowl in front of Steelers’ scouts Mark Bruener and Chidi Iwouma. Waller brings long arms and a wide wingspan to the position, allowing him to swallow up receivers in routes. He brings physicality to the position as a tackler and possesses great ball skills overall, while showing high-end play in man and zone coverage overall.

The problem with Waller is that he’s struggled to say healthy the last two years. He’ll need to add some functional strength and will need to develop his recognition skills in Year 1, but he’s the ideal developmental corner to grab late due to his size and length overall.

Did you really think I was going to come out of my first mock draft without one of Connor Heyward or Quentin Lake?

I leaned Heyward here, due to the many hats he could wear for the Steelers on offense and on special teams. A true H-back in today’s NFL, Heyward could hold down multiple roles in Pittsburgh, whether that’s at fullback, as the No. 2/3 tight end, or even as a short-yardage running back, considering his background as a running back throughout his career at Michigan State before transitioning to tight end for his senior year.

Heyward flashed great ball skills in Michigan State’s bowl win over Pittsburgh, and then showed out as a route runner from the tight end position at the Senior Bowl. Add in his special teams abilities and willingness to do anything his team needs to win games, he profiles as an ideal late-round pick that can plug a handful of roster spots for the Steelers alongside older brother, Cam Heyward, for the foreseeable future in Pittsburgh.