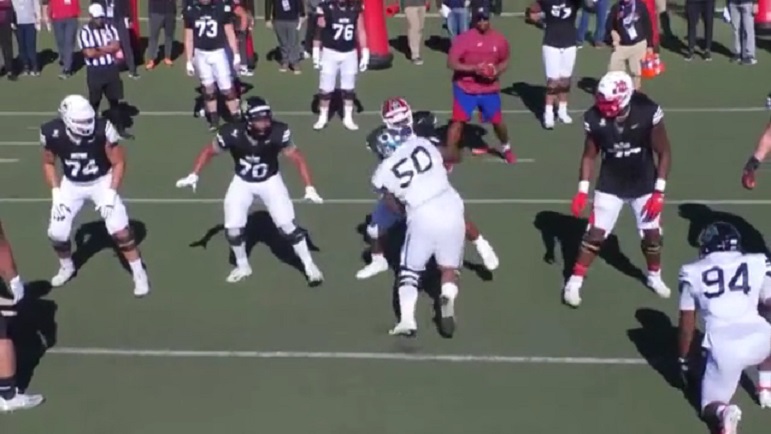 The East West Shrine Bowl practices are well under way and a part of those practices include the one-on-one battles. Players are often moved to different positions to get out of their comfort zone so it’s very interesting to see how they handle those conditions. There is also a benefit of seeing some of the players from smaller schools get a chance to face off with those from the Power 5 conferences. I finally got a chance to take a look at the offensive line versus defensive line in pass protection drills and I wanted to give you some who fared well and those who have their work cut out for them.

Robinson is a three year starter and had 23 starts at right guard and 14 at right tackle. He performed well in the majority of his reps showing off active hands, good pad level and a good anchor at guard and center. His first couple snaps hand him initially trying to recover against good defensive moves and he did on both. Not knowing much about him coming in he caught my attention.

He is a long, lean left tackle and a three year starter. He is a smooth mover with good feet to move laterally and mirrors pass rushers well to the inside. He used his length well on rushers up the arc and showed a nice anchor against edge rushers. They put him at right tackle for one rep but he looked uncomfortable.

I mentioned him a little bit on the podcast with Dave as a player who has the perfect build for a five technique or defensive end in the Steelers alignment. He has several good pass rush reps and showed he could rush with power using his length and with quickness showing a good inside move and a rip on the outside of the blocker. He’s a good combination of size and athleticism.

He is another player I mentioned on the pod and he is a three time All-Sun Belt selection. The Shrine coaching staff gave him some reps on the edge and inside and he showed out. He is not considered a speed rusher and relies on his ability to win with power which he did using a bull rush and stab move. If he gets his hands into the chest of the blocker, he can move just about anyone.

Dixon is the opposite of Gunter and he wins with speed. Playing for the Spartans he improved each season with career highs in sacks and tackles for a loss this season. He plays with a high motor and displayed the ability to get off the line quickly, showed some very good bend around the arc and spin move that was exceptionally fast. He’s has a chance to make a name for himself this week.

Booker is a versatile defensive lineman that can play up and down the defensive line and has experience on special teams as well. From what I saw in these practice reps he uses his hands very well and is a smart pass rusher. When he saw a blocker reach with their outside hand he swiped it away quickly for maybe the quickest rep win out of anyone. His hands were placed well on bull rushes and he used chops effectively as well.

Here are a few players that had some struggles.

He struggled with his anchor on just about every rep consistently giving up ground. He was a bit of a waist bender so maybe he can fix that going forward.

He looked outmanned throughout the practices stopping his feet and struggling with defenders getting into his chest. He didn’t show the play strength to compete consistently.

He is undersized and it showed with defenders yanking him out of the way and pushing him back in the pocket. He’s going to struggle with NFL defensive tackles.

He is another long and lean tackle and was a graduate transfer from Texas A&M. He doesn’t have a lot of starting experience but had a good season. He looked very balanced and calm getting into his pass set. He had a good, quick punch and used his length well with pass rushers up the arc. He does play a bit high and improving his pad level would help.

He has a ton of experience being a four year starter with two coming at left guard and the last two coming at center. He is another light center but has very good length. I was impressed by his hand strength and ability to sustain blocks. He plays with good pad level and showed a good anchor. He lunged on one rep and the defender swam over him.

The redshirt senior has been consistent in his tackle production and improved as a pass rusher as well. The first word I wrote down for him was “maniacal”. He showed very good snap quickness and ability to get into gaps. He hands were very active putting stress on the blockers including using a quick rip. He had a high rate of success in practice and could play in multiple spots on the defensive line.

Volson was an FCS All-American and had shown versatility along the offensive line. He has experience playing primarily at right tackle but also getting time at left tackle and both guard spots. Despite his size he was able to play with good pad level inside and did well mirroring defenders. He also showed a good anchor and play strength on the outside. He’ll give a team options of where to use him.

He was one of the tackles that measured in with arms longer than 36 inches. He was a three year starter at Florida mostly at right tackle. He looked pretty good with his pad level and his play strength was evident. The punch looked impressive using that length to land shots to the chest of edge rushers before they could reach him.

He has some versatility as an interior offensive lineman with plenty of starting experience at both guard spots and some time at center. He played with good balance, pad level and hand strength but could use some sand in the pants. He displayed the ability to recover when the defender initially looked like he would win the rep fighting to regain the upper hand.

Here are a few players that had some struggles.

He ended up on the ground a couple times and likes to use one hand to hold off blockers. One swipe from a defender on the hand will get him beat.

On almost every rep he attempted to time the snap and ended up either offside or off balance which kept him from winning his reps.

He showed very good effort on every rep but he was overmatched by the size and strength of the offensive lineman.