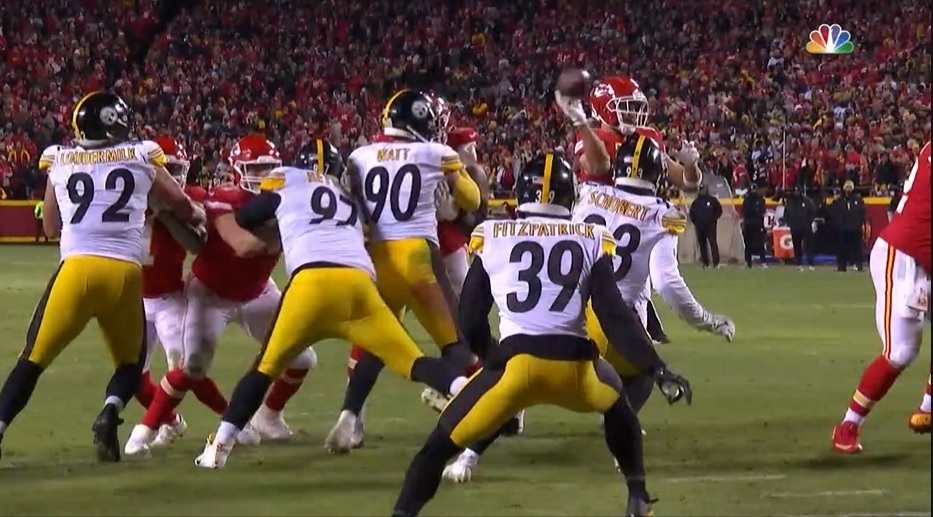 For one last time this NFL season, let’s get a little weird.

– Some weird stats with the score. Be warned, they are not fun.

– The Steelers have allowed 35+ points in four straight playoff games. That is an NFL record.

– The Steelers have allowed 42+ points in three straight playoff games. That is also an NFL record.

– It’s been six years and one day since Pittsburgh allowed under 30 points in a postseason contest. January 15th, 2016 to the Alex Smith Kansas City Chiefs, who scored just 16 in a KC loss. No such luck against the Chiefs Sunday night.

– At halftime tonight, the Chiefs had more offensive plays (49) than the Steelers had yards (44).

– Patrick Mahomes has put up numbers in three starts against Pittsburgh that would make even Tom Brady blush.

Patrick Mahomes in three career games against the Steelers.

– Including the playoffs, Chiefs’ WR Byron Pringle has nine touchdowns. Four of them have come against the Steelers. Two in Week 16, two in the Wild Card game.

– Nine different Steelers caught 2+ passes Sunday night. The leading receiver, James Washington, had just 37 yards. Kansas City had six different players at or above 37 yards. So the Steelers’ leading receiver would’ve been tied for sixth on the Chiefs’ (with Pringle, who had 37).

– Including playoffs, the Steelers did not score a first quarter touchdown over their final nine games. In fact, they scored a grand total of nine points, 1.0 per game. Every other team had at least 16.

– T.J. Watt scored his first NFL defensive touchdown of his career Sunday night and only the second of his college/pro career. The other came in a 2016 win over Purdue at Wisconsin, a 17-yard pick-six.

– Kansas City OL Nick Allegretti is the first offensive lineman to catch a TD against the Steelers since Bengals’ OT Andrew Whitworth did in 2010, a Bengals’ loss. You can check that play out here.

– In 1996, two offensive lineman caught TDs against the Steelers, including OT Jonathan Odgen. You can see that play here, with a Chris Berman “Oh those tricky Ravens” call, to boot.

So until tonight, it happened only once since the merger.

If only the rest of the game were that symmetrical.