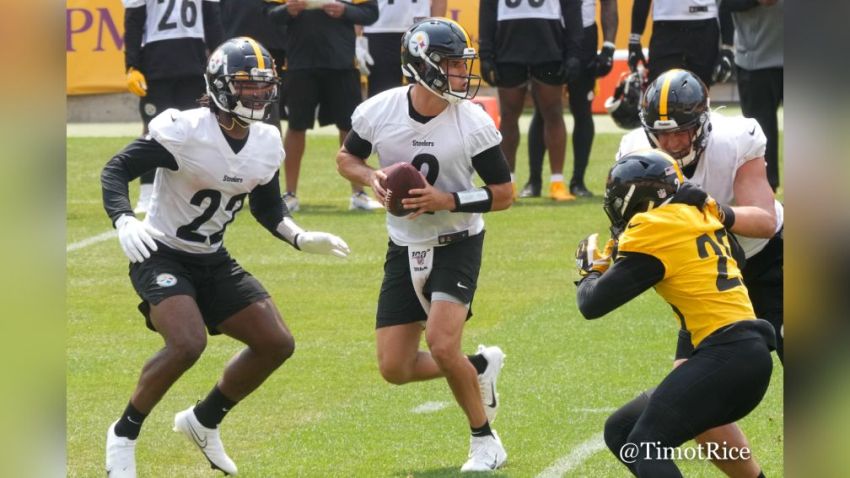 If you look at Vegas odds about who will be the opening day starting QB for the Pittsburgh Steelers in 2022, currently Mason Rudolph is the leader of the clubhouse. The choice of Rudolph makes sense for several different reasons First, he is the only QB currently under contract in Pittsburgh for next season with Dwayne Haskins scheduled to be a restricted free agent. Second, Rudolph has starting experience as the man at the helm in Pittsburgh, having started ten games in the last three seasons with a 5-4-1 record. Third, the organization typically shows loyalty to those in-house first before looking outside as Rudolph will be entering year five with the team next season.

However, while Mike Tomlin acknowledged both Rudolph and Haskins “will have an opportunity to establish themselves and have competition”, he also stated that they need to prove they deserve that opportunity not only from a “development process but through playing itself”.

Then Tomlin follows up that statement with a chuckle, “They are guys that start that I wouldn’t characterize as everyday starters.”

Hearing that in real-time, it suggests to me that Tomlin isn’t comfortable with either Rudolph or Haskins leading the charge for Pittsburgh next season, as least for the entire 2022 campaign. Tomlin fully knows what Rudolph is capable of as a starting quarterback in the NFL having watched him up close for four years. He was a starter for a large portion of the 2019 season when Ben Roethlisberger suffered a season-ending elbow injury, completing 62% of his passes for 1,765 yards for 13 TDs and nine INTs. While Rudolph went 5-3 during that stretch, he benefitted from elite play by the Steelers’ defense who just traded for Minkah Fitzpatrick, often being asked to manage the game rather than being a catalyst for the offense.

Rudolph also was benched during the 2019 season in favor of Devlin “Duck” Hodges who currently plays for the Ottawa Redblacks in the CFL. The UDFA out of Samford got the nudge by Tomlin in a Week 11 game against the Browns because Tomlin thought Hodges would provide a better chance to win.  “Just felt like our offense needed a spark. Mason wasn’t doing enough; Duck came in and provided us with a spark, made a couple plays.” Given the fact that Hodges is now out of the league, that’s not necessarily a vote of confidence.

Granted, Rudolph is allowed to progress as a player and has shown some strides since then, but with the defense regressing heavily since his extended time as a starter and the fact the offense failed to get anything going under his direction this season in what would be a tie against the winless Detroit Lions, Rudolph’s ability to lead this team to winning football has to be a question Tomlin is pondering with the current roster in front of him.

I was all in on bringing in Dwayne Haskins last year, thinking a change of scenery would do him wonders in a more stable situation in Pittsburgh as a former first round pick with the pedigree to be a talented passer in the NFL. While he has impressed in practice and has had moments where you see the arm talent during the preseason and in his limited action in Washington, he still has noticeable issues with the game in-between the ears. His decision making has been spotty at times and his ability to read and diagnose coverages has been something he has struggled with since his time in the nation’s capital.

Haskins does undoubtedly have all the athletic talent in the world as a passer, having an arm that can “throw a football through a carwash without the ball getting wet” along with that mobility to create off-script and throw on the run as well as pick up yards with his legs on the ground. The question is whether Tomlin has seen enough from Haskins in 2021 to be comfortable rolling with him and Rudolph in 2022 Training Camp in a battle for the starting job given Rudolph’s track record and Haskins’ up-and-down play in the preseason.

While Tomlin acknowledges there will be competition, he also stated that there is always competition at every level. That is, when they don’t have a legit starting quarterback like they had the last 18 years with Ben in the fold. Rudolph just mentioned in an interview that he is relieved he can compete for the starting job without worrying about “stepping on the toes” of Roethlisberger who was the penciled-in starter.

While Rudolph and Haskins should be excited about the prospects of competing to be the next starting QB in Pittsburgh, Tomlin offered another intriguing statement about searching for the next franchise QB:

“I’m excited about that challenge. Those of us that are competitors are. It’s a challenge. It makes you uneasy.”

This statement, along with the statement above, suggest a couple of things. First, Tomlin recognizes that they need to find a new franchise quarterback. Second, Tomlin knows that option isn’t currently on the roster. Third, Haskins and Rudolph still haven’t proven to him that they deserve to be named starters and will have to prove it with their offseason work as well in game action. Fourth, the notion of finding a new franchise quarterback makes Tomlin uneasy knowing it’s a challenge to field a competitive roster that can win football games in this league. Pittsburgh snuck by the skin of their teeth this season, doing just enough to get by and limp into the playoffs.

This isn’t how Tomlin wants to roll, acknowledging that offense and defense weren’t close to acceptable to play winning football. Tomlin isn’t about losing, and the fact that this roster made it into the playoffs is a minor miracle. However, while many would suggest that a rookie quarterback or a mid-level free agent wouldn’t move the needle for this team, Tomlin knows what he currently has in-house. Rudolph and Haskins will get their chance, but if this offense could barely win with Roethlisberger on his last legs this season and he was seen as a better starting option than Rudolph against the Lions, that speaks volumes in his ability to play winning football to Tomlin’s expectation.

I’m not suggesting that Tomlin is dead set drafting a QB in the first round of the 2022 NFL Draft, that they will sell the farm for Aaron Rodgers or Russell Wilson, or they will sign Marcus Mariota, Jameis Winston, or Mitchell Trubisky as a bridge starter on a prove it deal. However, based on Tomlin’s recent comments and his desire to improve the offensive output from being bottom of the league the last few seasons, it would be fair to say that Tomlin plans to add to the QB room this offseason with the intent of finding a guy he can feel confident in as a starting option either right way or for the long haul.

What are your thoughts on Mike Tomlin’s comments regarding the QB position? Do you think he gave Rudolph or Haskins a ringing endorsement, or do you think that he is actively considering how he can improve the QB room for 2022? Can Rudolph or Haskins play winning football for the Steelers as for a full season as the starter? Please leave your thoughts in the comments section below and thanks again for reading!