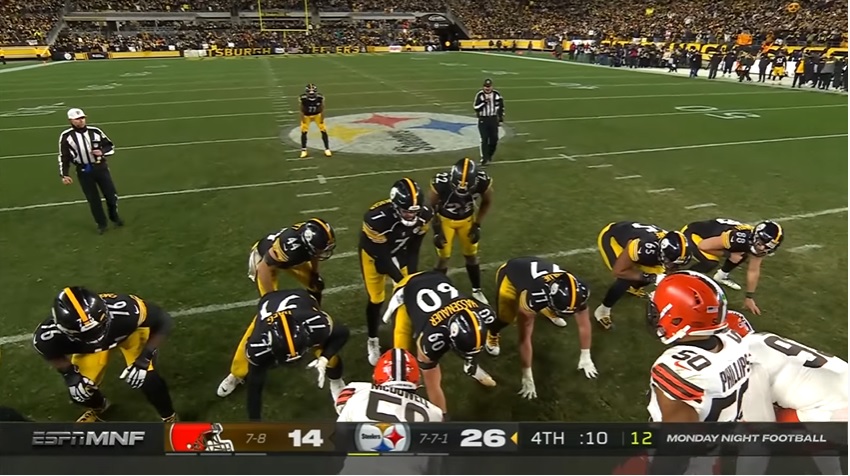 Quietly, Pittsburgh Steelers’ rookie Tre Norwood might have made the play of the game in the 26-14 win over the Cleveland Browns Monday night at Heinz Field.

No, the play absolutely had no determination on the actual outcome of the game. What the interception of Baker Mayfield — the first of Norwood’s career — with under a minute to go did, though, was give the Steelers’ offense the football one more time, allowing future first ballot Hall of Fame quarterback Ben Roethlisberger to take the ever-sweet victory formation kneel down one final time at Heinz Field, getting the true sendoff he deserved.

That kneel down touched off quite the moment following the final whistle at Heinz Field as Roethlisberger sat on the home bench one final time collecting his thoughts, then saying goodbye to the only place he’s called home in the NFL for 18 seasons.

Ben Roethlisberger leaves with his family. What moment. #Steelers pic.twitter.com/5lCqypaLoY

On Friday, Norwood got the chance to speak about the interception and the moment it helped create, telling reporters it’s something that will stick with him for the rest of his career, according to audio provided by the team.

“That means a lot, and that might be an understatement, honestly,” Norwood said to reporters. “Just being able to be a part of that moment, you know, he’s been doing it here in Pittsburgh for 18 years at a high level and just how much the city loves him, how much this organization loves him. Just being able to be a part of that, to give him that opportunity to go out there one last time in the victory formation…that means a lot to me and something that I always remember, especially in my first year as a rookie. That’s something that will go in the memory box and that I’ll hold tight from here on out.”

Norwood has had a strong rookie season, and being able to make a play like that in an emotional game like Monday night’s was — not only for the Steelers but for Roethlisberger — was huge. He was in the right place at the right time and capitalized on the moment, and will forever be remembered as the guy who made the play to get Roethlisberger back on the field on final time in victory formation.

Even if Norwood never makes another play in his career as a Steeler or as an NFL defensive back, he’ll always have that moment. Hats off to him for not only making the play, but recognizing the moment and the magnitude of his play as well.