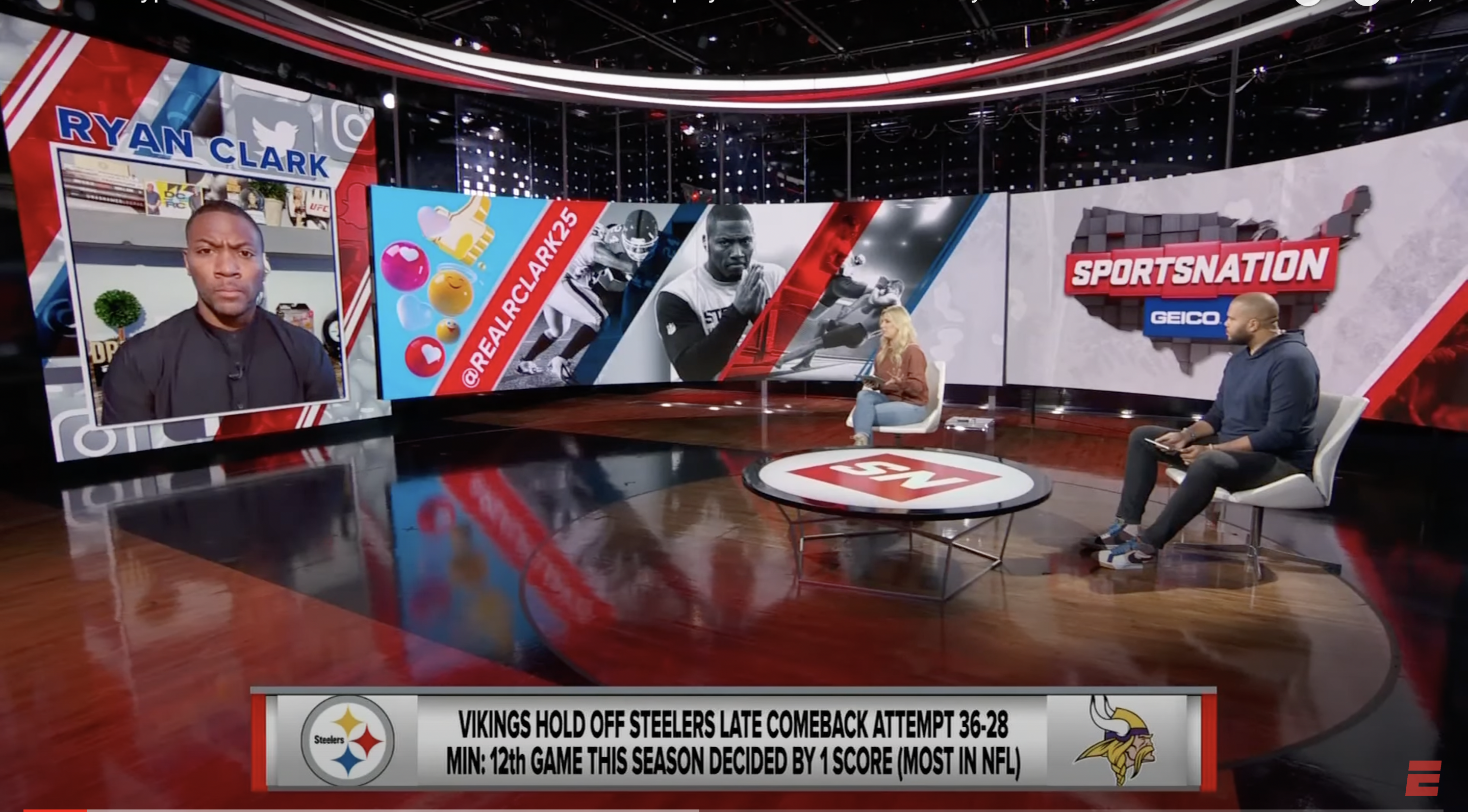 Just under 24 hours removed from the debacle for the Pittsburgh Steelers that was a 36-28 loss to the Minnesota Vikings on Thursday Night Football, ESPN’s Ryan Clark is back in the news blasting his former franchise — and rightfully so.

Two weeks ago, following an embarrassing loss to the Cincinnati Bengals, Clark questioned the heart, effort and mentality of the Steelers, especially defensively, as the Bengals ran all over the Steelers in a 41-10 win. Then, last week, Clark called for Ben Roethlisberger to be benched ahead of the matchup with the Baltimore Ravens, a game that the Steelers ultimately won thanks to an incredible fourth quarter from the future Hall of Fame quarterback.

Now, Clark is back in the headlines for his absolute leveling of one Chase Claypool, who had one of the most bone-headed displays of selfishness one has seen in Steelers history, right up there with the Plaxico Burress spike after not being touched down.

Resetting the scene: on a fourth and one from the Minnesota 43 with 42 seconds left and no timeouts for the Steelers, Roethlisberger completed a quick slant to Claypool in the field of play for nine yards and a first down. Rather than getting up and sprinting to the hashmark to hand the football to the official so the Steelers could get set and clock the football, Claypool signaled for a first down, then got into a bit of an argument with right guard Trai Turner, then had the football knocked from his hands by Vikings’ linebacker Eric Kendricks before the Steelers were able to clock the football with 24 seconds left.

When Claypool was tackled, the clock read 38 seconds. Do the math and that’s 14 seconds that ticked off. That’s…bad.

Clark had seen enough, blasting the second-year receiver on Friday morning’s SportsNation on ESPN, calling Claypool one of the most immature players he’s ever seen. This coming after Clark blasted Claypool on ESPN’s GetUp Friday morning.

.@Realrclark25 went OFF on Chase Claypool 😳

"Chase Claypool is as mentally and emotionally underdeveloped as he is physically overdeveloped. … He only cares about himself! And that self-centeredness is part of what's bringing the Steelers team and organization down." pic.twitter.com/1ElNGKx5EU

“He’s one of the most immature football players I’ve ever seen,” Clark said, according to video via ESPN’s official YouTube page. “As mature as he is physically, as developed as he is physical, he’s underdeveloped from an emotional and mental level when it comes to the game of football. He had an early personal foul. You go back to the Cincinnati game two weeks ago, he gets a personal foul late and then followed that up with a dropped ball on the next play.

“Now, you have an opportunity to get your team an extra play, spike the football. We’ve seen Larry Fitzgerald sprint faster to the referee or the official to hand him the football in the two-minute drill than he actually did in the route. But for Chase Claypool, it was more important for him to have his look-at-me moment.”

Though I certainly disagree with Clark questioning Claypool’s mental development or underdevelopment — that’s not for talking heads to do — Clark is spot-on that Claypool cared more about getting his me-first moment late in that Vikings game than he did about the situation that the team was facing.

Then, to have the audacity to scream at Trai Turner after Roethlisberger clocked the football just continues to show how much self awareness Claypool lacks, especially with all this coming after Mike Tomlin had already benched him in the first quarter for his silly personal foul penalty.

Clark continued to blast Claypool after that.

Harsh words spoken by Clark, but he’s not afraid to drop the hammer when the time calls for it.

Claypool has a lot of growing up to do both on and off the field. It’s hard to recall a larger sophomore slump for a player in Pittsburgh than Claypool, who has struggled to consistently make a play this season, has just one touchdown on the year and leads the NFL in penalties for receivers. He’ll need to do a lot of soul searching this offseason to bounce back.